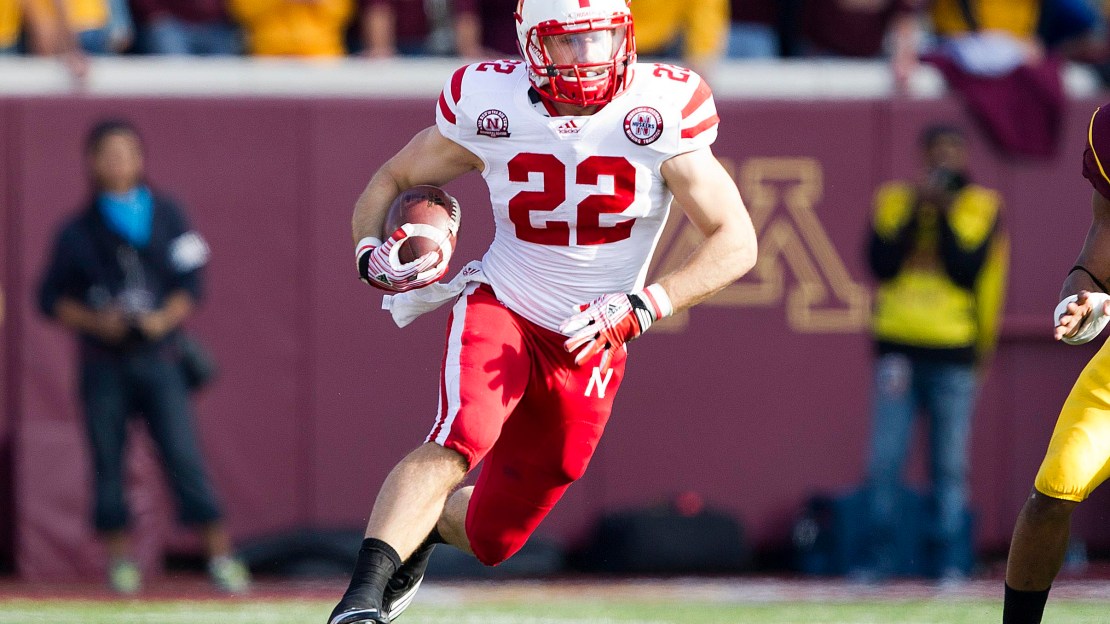 (AP) Rex Burkhead rushed for 117 yards and a touchdown and No. 13 Nebraska racked up 346 yards on the ground in a 41-14 victory on Saturday. The Huskers (6-1, 2-1 Big Ten) took over TCF Bank Stadium in their first trip to the Twin Cities since 1989. Taylor Martinez threw for 162 yards and a touchdown and Austin Cassidy returned a fumble for another score in the romp. MarQueis Gray was 9 for 18 for 122 yards for the Golden Gophers (1-6, 0-3), but was just 2 for 8 for 9 yards in the first two quarters. Minnesota has been outscored 144-31 in three Big Ten games this season. Read the full AP recap, see the box score and check out our Big Ten scoreboard.

FINAL: No. 11 Nebraska notched a blowout win over Minnesota, 41-14 on Saturday at TCF Bank Stadium. Rex Burkhead rushed for 113 yards and one touchdown, and Kenny Bell picked up 82 rushing yards and one touchdown of his own, as the dynamic backfield duo led Nebraska's (6-1) ground attack. MarQueis Gray threw for 123 yards while going 9-18 for Minnesota (1-6). He threw no interceptions. Gray also ran for 68 yards on 18 attempts. The Golden Gophers' offense finished the game having gained 260 yards. Along with Gray's stats in the passing game, Minnesota also added 137 yards rushing on 39 attempts. The Cornhuskers' Taylor Martinez passed for 164 yards, completing 13 of 22 throws. He threw one touchdown and no interceptions. Martinez was also a threat on the ground, as he rushed for 59 yards on nine attempts. Nebraska's offense finished the game having gained 518 yards, including 171 passing yards on 14 completions. The Cornhuskers also moved the ball on the ground, earning 347 yards on 56 attempts.

FOURTH QUARTER: Nebraska ended its dominating performance with a powerful fourth quarter and capped off a 41-14 victory over Minnesota. The Golden Gophers closed the gap to 41-14 when Duane Bennett ran six yards to paydirt to cap an 89-yard drive.

THIRD QUARTER: Nebraska is set to cruise control as the Cornhuskers lead by a score of 41-7 at the end of the third quarter. Minnesota made the score 34-7 after MarQueis Gray kept it himself for a one-yard touchdown run to finish off a 57-yard drive. The key play on the Golden Gophers' drive was Gray's 53-yard pass to Da'Jon McKnight. Nebraska made its lead 41-7 when Aaron Green turned a handoff into a four-yard touchdown on the last play of a 16-play, 91-yard drive. Rex Burkhead clinched a 100-yard rushing game with 40 in the quarter, part of his 113-yard day through three quarters for the Cornhuskers. Minnesota has possession on its own 45-yard line to start the fourth quarter.

SECOND QUARTER: Twenty-four points in the second quarter has given Nebraska a commanding 34-0 lead. The Cornhuskers opened up the lead, 17-0, after Kenny Bell turned a handoff into an 82-yard touchdown to end a one-play, 82-yard drive. Nebraska added to its advantage when Brett Maher made a 26-yard field goal, putting a bow on a five-play, 68-yard drive to give the Cornhuskers the lead, 20-0. Nebraska's drive was highlighted by Taylor Martinez's 61-yard pass. Despite driving to Minnesota's one-yard line, the Cornhuskers had to settle for a field goal. Nebraska made the score 27-0 when the Cornhuskers recovered a fumble in the endzone. Nebraska expanded its lead to 34-0 thanks to a 14-play, 73-yard drive that ended when Rex Burkhead ran four yards to paydirt. The Cornhuskers will start the second half with the ball.

FIRST QUARTER: No. 11 Nebraska ran for 78 yards in the quarter, and the Cornhuskers lead 10-0 at the end of the first quarter. Nebraska scored when Brett Maher made a 21-yard field goal to polish off an 11-play, 47-yard drive, giving the Cornhuskers the game's first lead. Nebraska threw just two times during that series. The Cornhuskers added to their advantage when Taylor Martinez found Tyler Legate open for an 11-yard touchdown pass, polishing off a nine-play, 65-yard drive to give Nebraska the lead, 10-0. Minnesota will start the second quarter with the ball at its own 42-yard line.

Pelini showed some serious class by letting Minny/J Kill outscore his boys 14-7 in the second half. #mercy

Nebraska punting for the first time today with 9 minutes left to go in the third. #Huskers

Nebraska has now has145 consecutive points against Minnesota without the Gophers scoring. Seriously. #Huskers

Today we're seeing the quick-pass offense from Tim Beck I'd hoped we'd see from day one. It's low-risk and effective.

An odd play, but a rare one. They got the call right. Doesn't seem fair, but that's how it's supposed to be called

How do you fumble forward for a first down? Crazy.

If that 1st down stands thats bs

I love the Huskers, but how is that a first down?