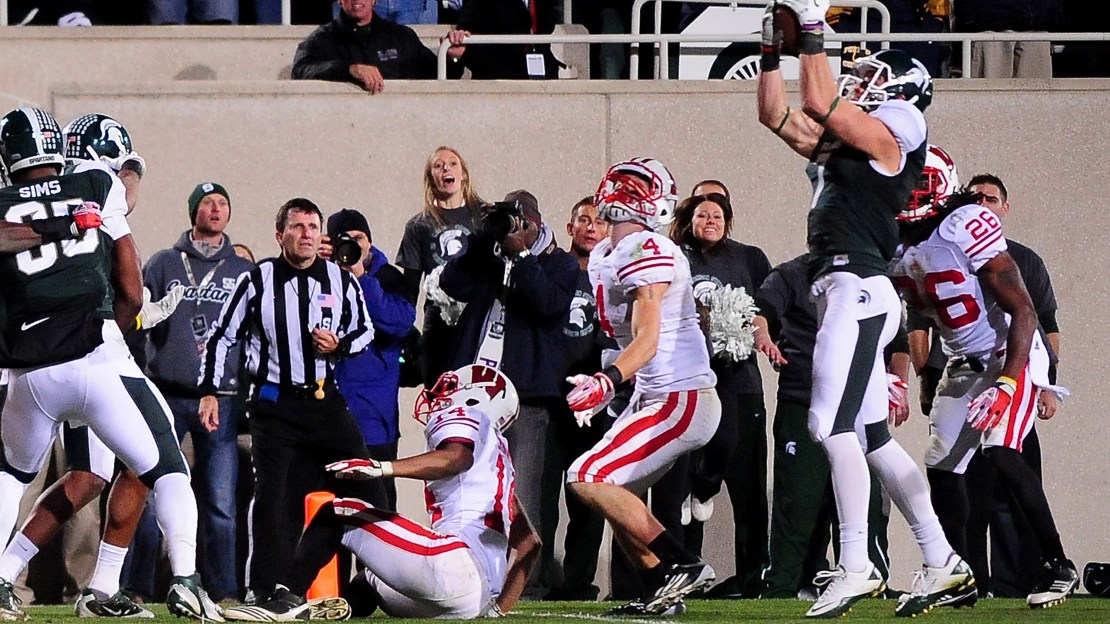 (AP) Keith Nichol caught a 44-yard Hail Mary on the game's final play for a tiebreaking touchdown, giving No. 15 Michigan State a stunning 37-31 win over No. 4 Wisconsin on Saturday night. With the game tied and 4 seconds left, Kirk Cousins rolled out to his right and threw one last pass. The ball went into the end zone but caromed off a Michigan State receiver back to Nichol, who caught it just outside the end zone and struggled for the goal line, fighting two Wisconsin defenders. The former backup quarterback was initially ruled short of the end zone, but officials overturned the call after a review, giving the Spartans (6-1, 3-0 Big Ten) the win and knocking the Badgers (6-1, 2-1) from the ranks of the unbeaten. Read the full AP recap, see the box score and check out our Big Ten scoreboard.

FINAL: Things looked grim for Michigan State (5-1) early on, but the Spartans stormed back to clinch the victory. Michigan State climbed back from an early 14-point deficit to pull off the comeback. Defense was an afterthought, as both teams lit up the scoreboard. The teams went wild on the attacking side of the ball, racking up 844 total yards combined. The Spartans' Kirk Cousins went 22 of 31 through the air for a total of 290 yards. Cousins finished the game with three touchdowns and no interceptions. Cousins looked for B.J. Cunningham often. He caught six passes for 102 yards and one touchdown. Michigan State racked up 398 total yards. The Spartans' rushing attack contributed 108 yards on 32 carries in addition to Cousins' passing effort. Russell Wilson threw for 223 yards while going 14-22 for the Badgers. He threw two touchdowns and two interceptions. Wilson also ran for 32 yards on seven attempts. Jared Abbrederis was the player Wilson targeted most often. He hauled in six catches for 91 yards. Wisconsin's offense finished the game having gained 446 yards. In addition to Wilson's efforts through the air, the Badgers also rushed 40 times for 223 yards.

THIRD QUARTER: Michigan State continue to lead, although Wisconsin added a field goal to make it 23-17 at the end of the third quarter. The Spartans' front seven stepped up in the quarter, allowing the Badgers to gain just 18 rushing yards. A 58-yard drive that ended when Philip Welch kicked a 33-yard field goal helped Wisconsin narrow the deficit to 23-17. Michigan State will start the fourth quarter with the ball on the Badgers' 32-yard line.

FIRST QUARTER: No. 4 Wisconsin gained 84 yards on the ground in the first, and the Badgers lead 14-0 at the end of the first quarter. Wisconsin took the game's first lead after Russell Wilson and Jacob Pedersen hooked up for a nine-yard touchdown on the last play of an 11-play, 80-yard drive. The Badgers added to their advantage when Montee Ball turned a handoff into a nine-yard touchdown, the last of a three-play, 30-yard drive to give Wisconsin the lead, 14-0. The Badgers began the drive with good field position after Wisconsin recovered a fumble. No. 15 Michigan State has the ball on the Badgers' 40-yard line to begin the second quarter.

Wow what a game. I have no voice now.

And with that replay, #PennState jumps into the divisional lead in the #BigTen

Jeez, most of my "mentions" downplaying MSU's possible upset. Home team or not, I didn't hear a soul picking the Spartans going in.

For 100 years, it was Michigan State. Now it's "Sparty." Even Musburger can't quit saying it. Who would send their kids to Sparty School?

Time to handle some adversity on the road. Let's regroup and get it done badgers

Wisconsin looks like a different team with no Montee Ball.

The fact that Wisconsin hasn't faced any adversity this season is starting to show now. It will be interesting to see how they react down 9.

#Wisconsin chooses the FG on fourth-and-1 and it's blocked. Fact they kicked shows #MichiganSt DL has finally shown up. #B1G

Michigan State has a speed advantage on the edge and in misdirection. Thinking this could turn into a shootout.

I forgot how good Chris Borland is. Holy cow.

Wisconsin is most likely not going to have a shot at the national championship as an undefeated team. This system sucks.

The biggest game since I've been at Michigan State #Letsgetit