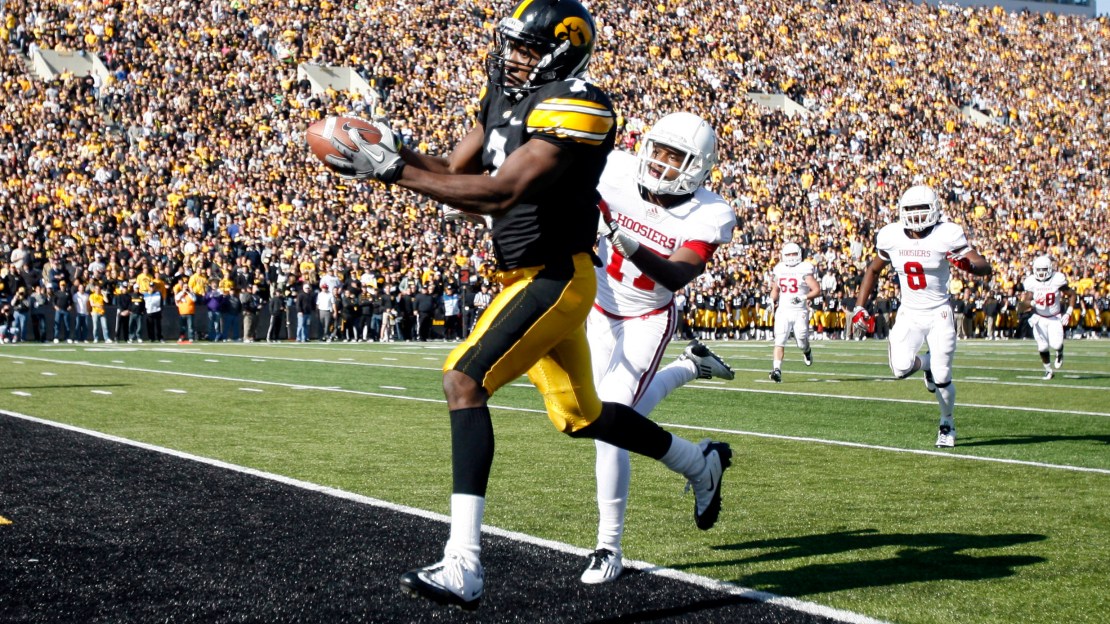 (AP) Marvin McNutt caught three touchdown passes to become Iowa's career leader and Marcus Coker ran for two more scores to lead the Hawkeyes past Indiana 45-24 on Saturday. Iowa (5-2, 2-1 Big Ten) followed up on its 41-31 victory over Northwestern a week ago with another big offensive outing, triggered by McNutt's scoring catches of 80, 24 and 29 yards from James Vandenberg, who had a career-best four TD passes in all. That gave the senior a school-record 24 touchdown receptions for his career. Indiana (1-7, 0-4) lost for the fifth straight time and now has been outscored 161-61 in Big Ten play. Read the full AP recap, see the box score and check out our Big Ten scoreboard.

FINAL: One of the best receivers in the Big Ten, Iowa's Marvin McNutt torched Indiana's secondary for a big day as he carried Iowa (5-1) to a 45-24 victory on Saturday at Kinnick Stadium. McNutt, who came in ranked No. 3 in the conference in receiving yards at 486 on the year, caught six passes for 178 yards and three touchdowns. The Hawkeyes' explosive offense used big plays to take down Indiana (1-6). Iowa had seven plays of 20 yards or more on its way to victory. With 54 seconds to go in the first quarter, James Vandenberg tossed an 80-yard touchdown to McNutt, the Hawkeyes' longest play on the day. The score gave Iowa a 14-7 lead. Tre Roberson kept the Hoosiers' offense on track, throwing for 196 yards and one touchdown on 16 of 24 passing. The Hawkeyes' Vandenberg went 12 of 16 through the air for a total of 247 yards. Vandenberg finished the game with four touchdowns and no interceptions. Iowa racked up 437 total yards. The Hawkeyes complemented Vandenberg's passing with 190 yards rushing on 41 attempts. Indiana's offense finished the game having gained 416 yards. Along with Roberson's stats in the passing game, the Hoosiers also added 220 yards rushing on 47 attempts.

FOURTH QUARTER: Brad Herman led Iowa in the quarter. He and the Hawkeyes finished off Indiana 45-24. Iowa opened up the lead, 45-17, after marching down the field for an eight-play, 77-yard drive that ended when James Vandenberg found Herman open for a one-yard touchdown pass. The Hoosiers capped off a 78-yard drive when Stephen Houston ran one yard to paydirt to make the score 45-24.

THIRD QUARTER: The margin in Iowa City remains 21, as the Hawkeyes lead 38-17. Indiana made the score 35-17 after Mitch Ewald kicked a 23-yard field goal to finish off a 70-yard drive. The Hoosiers went to the air just two times on that possession. Iowa made its lead 38-17 when Mike Meyer drilled a 46-yard field goal on the last play of a five-play, eight-yard drive. The Hawkeyes started in good field position at the Indiana 37-yard line when Jordan Bernstine's big kickoff return. Iowa's Marcus Coker reached the 100-yard rushing mark for the game thanks to nine in the quarter, and currently sits with 105 yards in all. Indiana is threatening to score to start the fourth quarter and have the ball on the Hawkeyes' five-yard line.

SECOND QUARTER: Iowa scored 21 points in the quarter, and the Hawkeyes now lead 35-14. Iowa finished with 126 yards through the air and 66 on the ground in the quarter. Four big plays, including Marcus Coker's 41-yard run, sparked the Hawkeyes in the quarter. Indiana has given up 21 straight points. The Hoosiers tied the score at 14 apiece after Stephen Houston turned a handoff into a one-yard touchdown to clinch a 12-play, 73-yard drive. Indiana threw just two times on that possession. Iowa broke the 14-14 standstill when James Vandenberg tossed a 24-yard touchdown to Marvin McNutt to cap off a four-play, 72-yard scoring drive. Took the Hawkeyes from the 35 and across midfield to ignite the drive. Iowa expanded its lead to 28-14 thanks to a seven-play, 56-yard drive that ended when Coker pounded in a two-yard touchdown run. The Hawkeyes' drive was highlighted by Vandenberg's 42-yard pass. Iowa opened up the lead, 35-14, after marching down the field for a four-play, 53-yard drive that ended when Vandenberg and McNutt hooked up for a 29-yard touchdown. The clock was the Hawkeyes' friend down the stretch, as the final score came with 16 seconds left to play. Iowa's drive took 47 seconds in all. McNutt clinched a 150-yard receiving game with 105 yards in the quarter, part of his five-catch, 185-yard day through two quarters for the Hawkeyes. Iowa's Vandenberg passed for 126 yards in the quarter to put him over 200 yards for the game. Vandenberg has 221 yards through the air so far today. The Hoosiers will get the ball to start the second half.

FIRST QUARTER:  Iowa aired it out to the tune of 95 passing yards in the quarter, and the Hawkeyes lead 14-7 at the end of the first quarter. Iowa took the game's first lead after Marcus Coker pounded in a one-yard touchdown run on the last play of an 11-play, 69-yard drive. The Hawkeyes threw just one time on that drive. Indiana tied things up at seven when a 12-play, 88-yard drive ended after Tre Roberson and Cody Latimer hooked up for a three-yard touchdown. A two-play, 80-yard scoring drive by Iowa snapped the 7-7 standstill, as James Vandenberg and Marvin McNutt combined for an 80-yard touchdown. The Hoosiers will start the second quarter with possession at their own 33-yard line.

McNutt should be banned in about eight states. He is filthy..and great throws by JVB. TD Iowa

I'm sitting next to a Tennessee Titans scout, and I believe he has enough material on Marvin McNutt.

Iowa must have forgot that this isn't flag football

This defense is in real trouble in November

Congrats to Marvin McNutt for his record 22nd TD catch!

On 1st possession of his 1st start, FR Tre Roberson leads Indiana's longest scoring drive of the season – 88 yards – and does it on road.

That was Iowa's second longest drive of the year.

JVB had third-down runs of 24 and 6 yards on #Iowa's opening 69-yard touchdown drive. Throwing body all over the place.

Indiana dissecting Iowa defense so far. LOTS of missed tackles by Hawkeyes too.