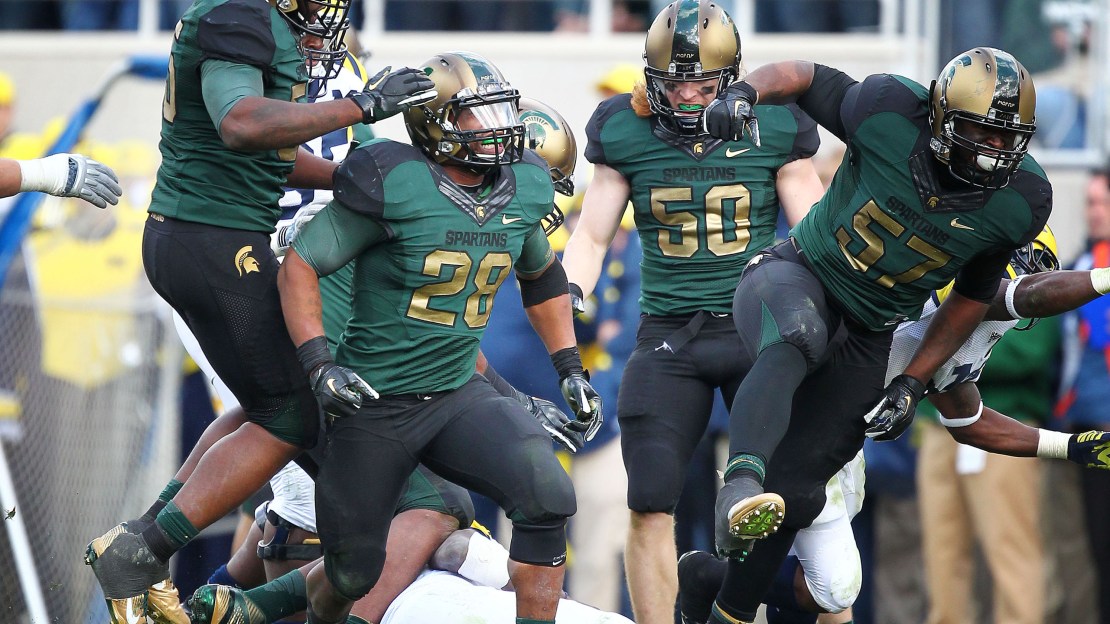 Every week during the football season, Brent Yarina posts his latest Big Ten Power Rankings. Week 7 saw two of the Big Ten's remaining perfect teams, Illinois and Michigan, fall from the ranks of the unbeaten. As for the power rankings, they are not meant to mimic the Big Ten standings. What fun would that be? They aren?t scientific, either. They?re simply Brent?s thoughts on where each Big Ten team stands after its latest game and entering its next contest. Agree? Disagree? Tweet @BTNBrentYarina. See the rankings in this post and watch the well-orchestrated card stunt from Kinnick Stadium now.

1. Wisconsin (6-0, 2-0) - Let's see: Russell Wilson has shown he can throw and run rather well, but can he catch? He sure can. Wisconsin's do-it-all quarterback caught a 25-yard touchdown pass from Montee Ball in Saturday's rout of Indiana. The North Carolina State transfer continues to make everything look so easy, and he's had the Wisconsin offense on an absolute tear since the season's first snap.
Last week: No. 1
Next game: at Michigan State

2. Michigan State (5-1, 2-0) - Critics can stop questioning whether Michigan State's top-ranked defense is legit, this after stifling previously prolific and undefeated Michigan. The Spartans didn't just limit the Wolverines to a season-low 14 points Saturday, they dominated to the tune of seven sacks and 10 tackles for loss. In its two games before hosting scorching Wisconsin, Michigan State has exploded for 16 sacks and 23 tackles for loss.
Last week: No. 4
Next game: vs. Wisconsin

3. Nebraska (5-1, 1-1) - Every coach wants to have an uneventful bye week, but Bo Pelini and Nebraska weren't so lucky this past week. The Huskers, of course, lost standout defensive lineman Jared Crick for the season due to a torn pectoral muscle last week. It's a big loss for an underperforming defense, however the Huskers have enough talent on that side of the ball to make up for it – assuming they start playing like everyone thought they would entering the season.
Last week: No. 5
Next game: at Minnesota

4. Penn State (6-1, 3-0) - The Nittany Lions aren't going to win any beauty pageants, that's for sure. While Penn State rarely, if ever, wows fans this season, they have an approach that works. It's an old-school approach – fitting that their coach is Joe Paterno – and it revolves around a stout defense and an improving running back in Silas Redd.
Last week: No. 6
Next game: at Northwestern

5. Michigan (6-1, 2-1) - For the third consecutive season, the Wolverines entered a much-anticipated game against rival Michigan State undefeated and left with their first loss. The previous two defeats paved the way for disappointing finishes to the season, as we all know. Will it happen again? Michigan appears to be a different team, what with an actual defense, but you can't help but wonder.
Last week: No. 2
Next game: Bye

6. Illinois (6-1, 2-1) - The Illini's perfect season came to a screeching halt in Saturday's 17-7 home loss against Ohio State. The defeat is troubling, mostly because Illinois couldn't do what it does best: run the ball, managing just 116 rushing yards on 35 carries (3.3 yards per tote). Oh, and then there's the fact Illinois lost despite Ohio State completing just one pass all day long. That's hard to do, although this was one of those days where Illinois just seemed to be out of sync across the board.
Last week: No. 3
Next game: at Purdue

T-7. Iowa (4-2, 1-1) - It was nice to see Iowa's offense bounce back from last week's 3-point output at Penn State with a 41-spot against Northwestern, but it's tough to know how much of it was the Hawkeyes offense and how much of it was the Wildcats struggling defense. It was probably somewhere in the middle, although it's pretty clear the offense will need to put up more showings like Saturday, because the defense is thin and more susceptible than it has been in recent years.
Last week: No. 7
Next game: vs. Indiana

T-7. Ohio State (4-3, 1-2) - The Buckeyes won at perfect Illinois despite completing just one pass, which is both a good thing and a bad thing. It's good because it means Ohio State is running the ball well, thriving on special teams and playing terrific defense, staples of Ohio State under Jim Tressel. And it's bad because the Buckeyes have struggled throwing the ball all season long and they won't be able to win consistently without any success in the passing game.
Last week: No. 9
Next game: Bye

9. Northwestern (2-4, 0-3) - Not even star quarterback Dan Persa can rescue the Wildcats when their defense can't stop anyone, and we've witnessed that each of the past three weeks. Northwestern is surrendering 40.3 points in its three Big Ten games – all losses – and it hasn't allowed fewer than 38 in that span. That's a lot of pressure to put on Persa and the rest of the offense.
Last week: No. 8
Next game: vs. Penn State

10. Purdue (3-3, 1-1) - The Boilermakers were their own worst enemies in Saturday's defeat at Penn State, tossing three interceptions and missing an extra point and a field goal. Those four points Purdue left on the field not only were costly in a game like this one, but they also were a huge surprise. Kicker Carson Wiggs doesn't miss many kicks, let alone boot a kickoff out of bounds, which he did following a late Purdue score.
Last week: No. 10
Next game: vs. Illinois

11. Indiana (1-6, 0-3) - Once again, Stephen Houston continues to be one of Indiana's lone bright spots. The running back ran for a career-best 135 yards in Saturday's rout at Wisconsin, including a 67-yard scoring scamper, and is averaging 112 total yards the past three weeks. Now, as for the rest of the Hoosiers, they remain a mystery and a huge struggle.
Last week: No. 11
Next game: at Iowa

12. Minnesota (1-5, 0-2) - The Gophers were off this past week, the perfect time for their bye. At 1-5, Minnesota closes out the season like this: Nebraska, Iowa, at Michigan State, Wisconsin, at Northwestern and Illinois. Things aren't going to get any easier, of course, but Minnesota and quarterback MarQueis Gray really needed the rest to reassess and get healthy.
Last week: No. 12
Next game: vs. Nebraska