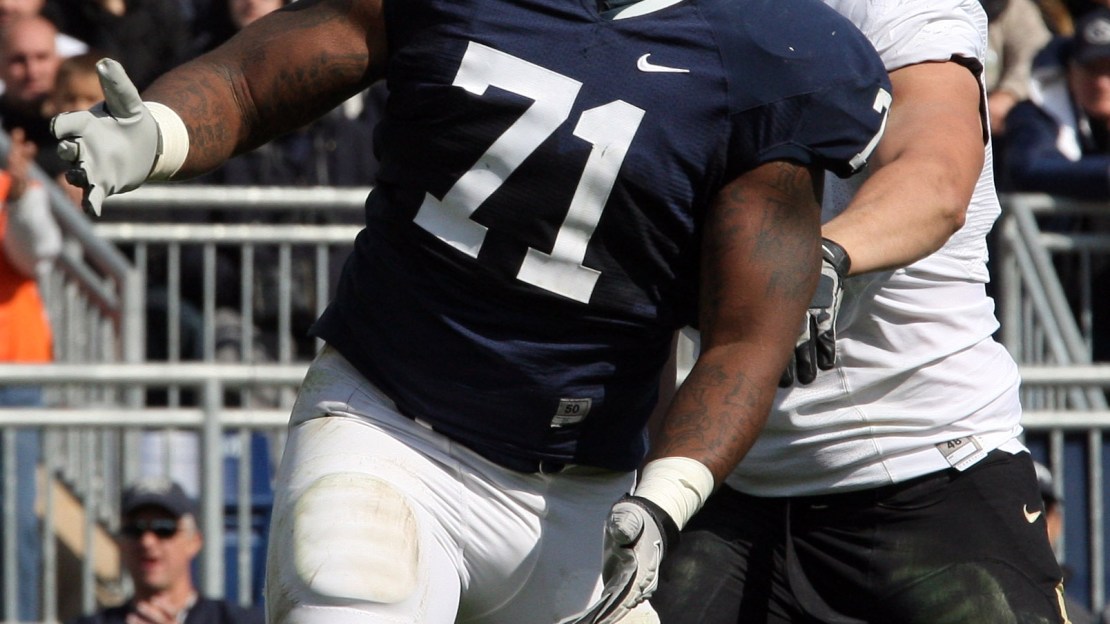 (AP) Silas Redd ran for 131 yards and a touchdown and Penn State took advantage of Purdue's special teams miscues to hold on Saturday for a 23-18 win. Akeem Shavers had a 1-yard touchdown run with 8:08 left but Purdue was stopped on a 2-point conversion attempt to keep the deficit at 20-18. A missed field goal and extra-point attempt earlier in the game also haunted Purdue (3-3, 1-1 Big Ten) on a windy afternoon. Nate Stupar's interception of a tipped pass at the Purdue 19 with 1:59 left finally sealed the game for Penn State. Read the full AP recap, see the box score and check out the Big Ten scoreboard.

FINAL: After building a eight-point lead, Penn State withstood a furious comeback by Purdue and managed to pull out a 23-18 victory on Saturday at Beaver Stadium. Home run plays keyed Penn State's (6-1) scoring attack. The Nittany Lions had five plays of 20 yards or more on their way to victory. With 12:53 to go in the fourth quarter, Matthew McGloin found Justin Brown open for a 34-yard pass for Penn State's biggest gain of the game. Despite the highlight, the Nittany Lions failed to score on that drive, which stalled at Purdue's (3-3) 23-yard line. Silas Redd carried the offensive load for Penn State, piling up 131 rushing yards and one touchdown on 28 attempts. Nathan Stupar showed good hands on defense for the Nittany Lions, picking off two Purdue passes. He on third-and-6 during a key drive in the second quarter. Penn State's offense finished the game having gained 367 yards, including 185 passing yards on 10 completions. The Nittany Lions' rushing attack also contributed 182 yards to the total, with the tally coming on 48 carries. The Boilermakers' Caleb TerBush went 12 of 25 through the air for a total of 162 yards. TerBush tossed one touchdown and two interceptions. TerBush had a trusted receiver in Justin Siller. He hauled in five catches for 68 yards. Purdue racked up 344 total yards, including 182 yards passing while completing 14 of 30 attempts. The Boilermakers' running game proved effective, netting 162 yards on 33 rushes.

FOURTH QUARTER: Justin Brown led Penn State in the quarter. He caught two passes for 56 yards and the Nittany Lions kept Purdue at bay for a 23-18 victory. The Boilermakers closed the gap to 20-18 when Akeem Shavers turned a handoff into a one-yard touchdown to polish off a 45-yard drive. Purdue started in good field position when Albert Evans intercepted a Matthew McGloin pass. Penn State opened up the lead, 23-18, after marching down the field for a four-play, six-yard drive that ended when Anthony Fera drilled a 29-yard field goal.

THIRD QUARTER: Purdue is hanging tough with Penn State, down 20-12 at the end of the third quarter despite a matchup most presumed to be a blowout. The Nittany Lions expanded their lead to 13-6 thanks to a four-play, eight-yard drive that ended when Anthony Fera drilled a 40-yard field goal. Penn State began the drive with good field position at the Boilermakers' 31-yard line after Justin Brown returned a punt. Purdue capped a 26-yard drive when Caleb TerBush and O.J. Ross hooked up for a 14-yard touchdown to make the score 13-12. Raheem Mostert's big kickoff return set the Boilermakers up to start the drive. The Nittany Lions made their lead 20-12 when Silas Redd pounded in a nine-yard touchdown run on the last play of a four-play, 60-yard drive. Matthew McGloin's 22-yard pass to Devon Smith took Penn State from the 40 and across midfield to ignite the drive. The Nittany Lions' Redd topped 100 yards rushing for the game in the quarter, and has plenty of time to add to his 102 total yards on the ground. Penn State has the ball on its own 20-yard line to begin the fourth quarter.

SECOND QUARTER: Purdue continues to hang around, but still trails Penn State 10-6 at the end of the second quarter. The Nittany Lions held the Boilermakers to just 20 yards passing during the quarter. Purdue made the score 7-6 after Carson Wiggs kicked a 32-yard field goal to finish off a 67-yard drive. The Boilermakers used Ralph Bolden's 39-yard run to fuel the drive. Penn State opened up the lead, 10-6, after Anthony Fera made a 29-yard field goal to end a three-play, zero-yard drive. The Nittany Lions will have possession to start the second half.

FIRST QUARTER: Curtis Dukes had a productive quarter for Penn State. He ran for one yards and one touchdown and the Nittany Lions lead 7-3 at the end of the first quarter. Penn State struck first when Dukes pounded in a one-yard touchdown run, the final play of a seven-play, 73-yard drive. The Nittany Lions crossed midfield on Rob Bolden's 21-yard pass to Brandon Moseby-Felder from the 38-yard line. A 70-yard drive that ended when Carson Wiggs kicked a 27-yard field goal helped Purdue narrow the deficit to 7-3. The key play on the Boilermakers' drive was Caleb TerBush's 50-yard pass to Justin Siller.Purdue will start the second quarter with possession on Penn State's 41-yard line.

Silas Redd gets his 3rd straight 100-yard game, 4th of the season and 5th of his career. Posting 5.1 yards per carry so far on the day.

Why have replay if they can't see that wasn't an interception?

#PennState has allowed 2 touchdowns in the last 18 quarters

I know it's boring, but this is how PSU wants to play this game, with the wind the way it is. Run the clock down, and play field position.

Ralph Bolden's 39 yard run for Boilers is the longest run vs. the Penn State D this season.