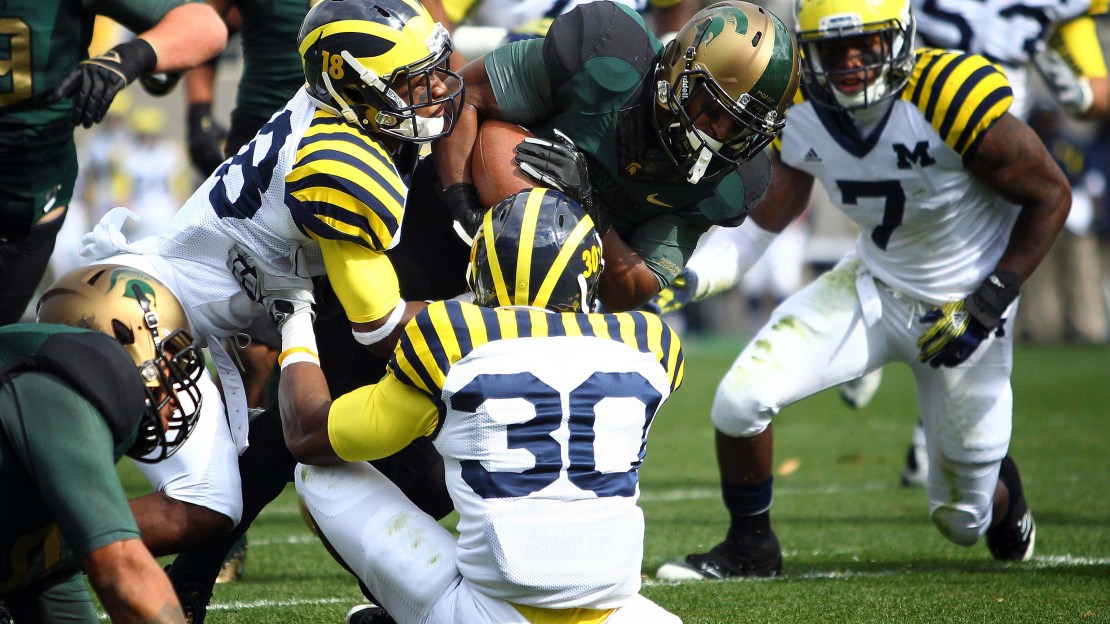 (AP) Keshawn Martin scored twice in the third quarter on similar lunges to the end zone, and No. 23 Michigan State held off Denard Robinson and No. 11 Michigan 28-14 on Saturday for its fourth straight victory over the Wolverines. The Spartans (5-1, 2-0 Big Ten) equaled their longest winning streak over their in-state rivals. Michigan (6-1, 2-1) lost for the first time under coach Brady Hoke. The Wolverines had a chance to tie it, but Robinson was sacked on fourth-and-1 from the Michigan State 9-yard line with 6:16 to play. Robinson later threw an interception, and Isaiah Lewis returned it for a score with 4:31 left to make it 28-14. Read the full AP recap, see the box score and check out our Big Ten scoreboard.

FINAL: No. 22 Michigan State kept No. 10 Michigan's explosive offense in check on the way to a 28-14 victory on Saturday at Spartan Stadium. Michigan (6-1) came into the game averaging 457.5 yards per game and were held to only 251 yards on the day. Kirk Cousins threw for 120 yards while completing 13 of 24 passes for Michigan State (5-1). Cousins tossed two touchdowns and no interceptions. The Spartans racked up 334 total yards. Along with Cousins' stats in the passing game, Michigan State also added 214 yards rushing on 39 attempts. The Wolverines' Denard Robinson passed for 123 yards, completing nine of 24 throws. He threw one touchdown and one interception. Robinson was also a threat on the ground, as he rushed for 41 yards on 18 attempts.

FOURTH QUARTER: Michigan State put on a defensive clinic in the fourth, as Michigan finished with negative rushing yardage (-22 yards), and the Spartans finished off the Wolverines 28-14. Michigan closed the gap to 21-14 when Denard Robinson and Roy Roundtree hooked up for a 34-yard touchdown to put the finishing touches on a 34-yard drive. The Wolverines started in good field position when Jeremy Gallon returned a punt. Michigan State made the score 28-14 when Isaiah Lewis intercepted Robinson's pass and returned it for a touchdown.

THIRD QUARTER: Michigan State ran for 78 yards in the quarter, and the Spartans now lead 21-7. Michigan State's defense held tough in the quarter, holding Michigan to 32 total yards of offense. The Wolverines have given up the last 21 points. The Spartans broke the 7-7 standstill when Kirk Cousins and Keshawn Martin hooked up for a 10-yard touchdown to cap off a nine-play, 54-yard scoring drive. Michigan State added to its advantage when Cousins threw a 13-yard touchdown pass to Martin, the final play on a 10-play, 61-yard drive to give the Spartans the lead, 21-7. Michigan State's Edwin Baker rushed for 71 yards in the quarter to put him over 100 yards for the game. Baker has 142 total yards on the ground so far today. Michigan will start the fourth quarter with the ball at its own 46-yard line.

SECOND QUARTER: The two teams combined for more punts than points in a slow second quarter and the game is tied 7-7. There were five punts in the quarter as neither team could find a way to move the ball. Michigan State will get the ball to start the second half.

FIRST QUARTER: No. 22 Michigan State's Edwin Baker ran for 49 yards and one touchdown in the quarter, but the two teams are tied 7-7 at the end of the first. No. 10 Michigan scored when Denard Robinson kept it himself for a 15-yard touchdown run to polish off a 10-play, 80-yard drive, giving the Wolverines the game's first lead. Michigan drove across midfield after Vincent Smith's 26-yard run from the 40-yard line. The Wolverines threw just two times during that march downfield. The Spartans got even after Baker ran one yard to paydirt to end a nine-play, 63-yard drive that tied the score at seven. Michigan State crossed midfield on Baker's 21-yard run from the 37-yard line. Michigan has possession on its own 35-yard line to start the second quarter.

Tough Loss today. We will bounce back please believe it! This was just a little bump in the road. Next up PURDUE!! #stayfocused

"Big Brother" just got their butt kicked by "Little Brother" for the 4th year in a row!!! MSUMICH

With that fumble recovery…Michigan has forced 19 turnovers this season. They had 19 ALL last season. Nice job, Greg Mattison.

Would MSU get 2 wins in the standings for beating Michigan and itself at the same time?

I don't care who you are playing you don't take cheap shots like that!

Michigan is winning the second half 114-21 this year, trailing only Stanford in second-half point differential. Will that continue today?

Devin Gardner needs to play for UM in 2nd half

Urban Meyer is surprisingly down on Michigan's two-QB system, considering he won a national championship with one.

Sparty is supposed to be the #1 "D" but when they played against a good opponent (ND)they got owned!

Cousins quieting critics with nice throws, including one to convert 3/7 from #MSU 13

Robinson's TD marks the 4th straight game that Michigan has reached the end zone on its opening drive.

The Michigan uniforms are the illest. Go blue!!!!!

I think Denard Robinson just ran past a player or two in the Heisman Trophy race.

Too easy out there. #goblue

How we feeling about these combat uni's? I think they at awesome!!! #gogreen