Did You See This? Kinnick Card Stunt 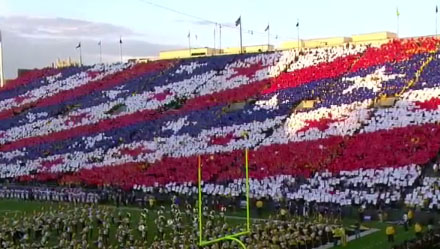 There was an unforgettable scene in Iowa City prior to Saturday night's game against Northwestern, and BTN cameras captured it in its entirety. During the National Anthem, fans at Kinnick Stadium did a card stunt that went from the fans honoring the Red, White and Blue to showing school spirit with "Go Hawks" and Black and Gold. And how appropriate for it to happen with former Iowa quarterback Ricky Stanzi on the sideline. Job well done, Iowa.

On the field, Iowa was pretty impressive, too, beating Northwestern 41-31 in a shootout. Where do the Hawkeyes land in Brent Yarina's Week 8 Power Rankings?