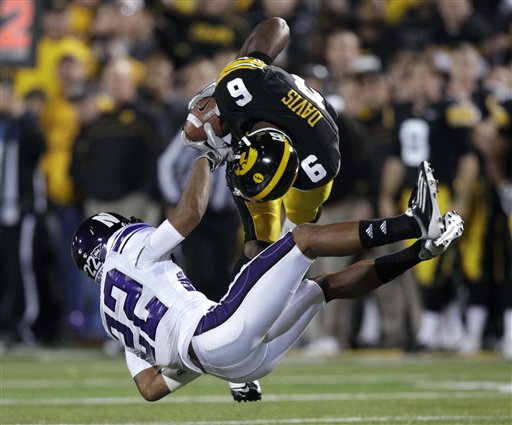 (AP) James Vandenberg threw for 224 yards and two touchdowns as Iowa beat Northwestern 41-31 on Saturday night, snapping a three-game losing streak to the Wildcats. Marcus Coker added 124 yards rushing and two TDs for the Hawkeyes (4-2, 1-1 Big Ten), who won despite allowing 495 yards and 29 first downs to Northwestern. Iowa blew a 17-0 second-quarter lead, then pulled ahead 24-17 on Coker's 1-yard TD run with 13:55 left. Vandenberg pushed the lead to 31-17 on a 35-yard TD pass to Marvin McNutt, and Coker's 1-yard touchdown run with 3:56 to go sealed just Iowa's second win over Northwestern in seven tries. Read the full AP recap, see the box score and check out our Big Ten scoreboard.

FINAL: Marcus Coker broke out against Northwestern, piling up 124 rushing yards and scoring two touchdowns to lead Iowa to a 41-31 victory on Saturday at Kinnick Stadium. The game was a shootout, with the offensive units for both teams putting up big numbers. Iowa (5-1) and Northwestern (2-4) rode their powerful offenses to a combined 874 total yards. The Hawkeyes didn't capture the lead until the fourth quarter. With 13:55 to go, Coker ran one yard to paydirt to give Iowa a 24-17 lead. The Wildcats nearly made a 17-point deficit evaporate, but the Hawkeyes' defense held strong against a late Northwestern comeback to clinch the victory. Iowa's James Vandenberg was good for 224 yards during the game, completing 14 of 22 passes. Vandenberg tossed two touchdowns and one interception. Vandenberg had a trusted receiver in Marvin McNutt. He caught six passes for 87 yards and one touchdown. The Hawkeyes' offense finished the game having gained 379 yards. Iowa's rushing attack contributed 155 yards on 28 carries in addition to Vandenberg's passing effort. Dan Persa threw for 246 yards while completing 31 of 40 passes for the Wildcats. Persa finished the game with one touchdown and one interception. Jeremy Ebert was the player Persa targeted most often. He caught 13 passes for 107 yards and one touchdown. Northwestern racked up 495 total yards, including 342 yards passing while completing 37 of 51 attempts. The Wildcats' running game proved effective, netting 153 yards on 41 rushes.

THIRD QUARTER: Northwestern's Adonis Smith ran for 15 yards and one touchdown in the quarter, but the two teams are tied 17-17 at the end of the third. The last 17 points have been scored by the Wildcats. A 68-yard drive that ended when Smith ran four yards to paydirt helped Northwestern narrow the deficit to 17-14. The Wildcats drove across midfield after Dan Persa's 21-yard pass to Jeremy Ebert from the 33-yard line. Northwestern tied the score at 17 apiece after Jeff Budzien made a 47-yard field goal to cap a nine-play, 40-yard drive. Iowa is in a prime position for points at the Wildcats' 14-yard line to open the fourth quarter.

SECOND QUARTER: Iowa aired it out to the tune of 85 passing yards in the quarter, and the margin is still 10, as the Hawkeyes lead 17-7. Iowa made its lead 17-0 when James Vandenberg and Keenan Davis combined for a 47-yard touchdown on the last play of a three-play, 72-yard drive. Vandenberg's 31-yard pass to Davis took the Hawkeyes from the 22 and across midfield to ignite the drive. Northwestern made the score 17-7 after Dan Persa and Jeremy Ebert hooked up for a six-yard touchdown to finish off a 65-yard drive. The Wildcats will have possession to start the second half.

FIRST QUARTER: Marcus Coker had a productive quarter for Iowa. He ran for 19 yards and the Hawkeyes lead 10-0 at the end of the first quarter. Iowa got on the scoreboard first, rattling off a nine-play, 52-yard drive that ended in a score when Mike Meyer drilled a 25-yard field goal. The Hawkeyes made the score 10-0 when Tanner Miller intercepted a Dan Persa pass and returned it for a touchdown. Northwestern will start the second quarter with the ball at Iowa's 20-yard line.

BREAKING: Time of possession is a month for Northwestern to the time it takes to heat a burrito for Iowa.

Iowa now all over Ebert. Donatell and Bernstine that time.

Northwestern is playing the type of pass defense that Illinois came to love two weeks ago in Champaign.