Best of the Best: Week 7 Recap 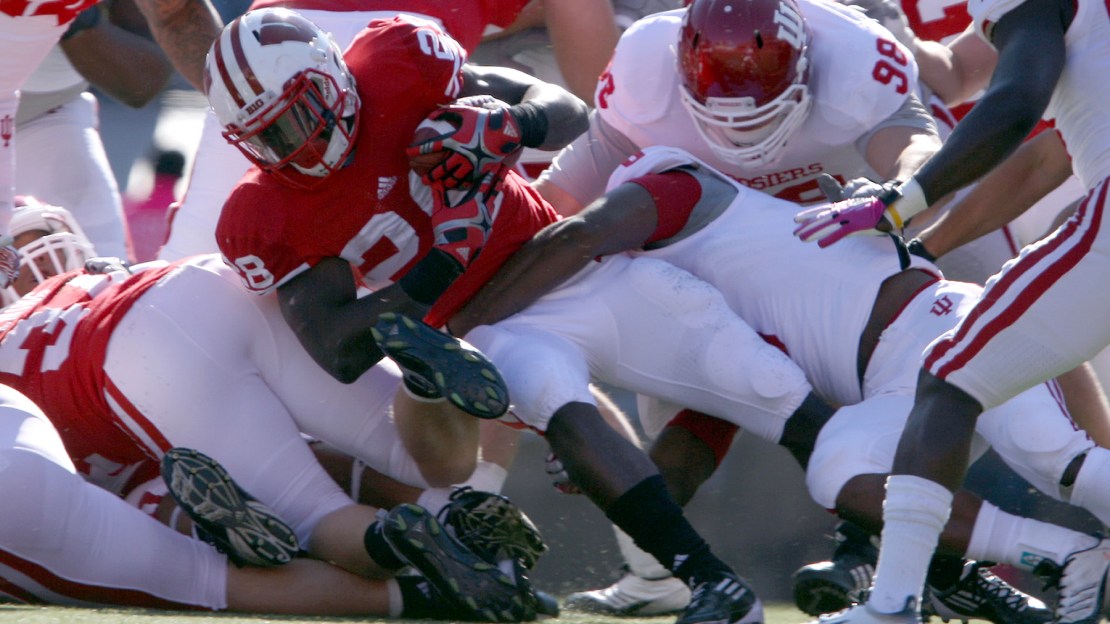 Every week during the fall, BTN.com web editor and blogger Brent Yarina recaps the week that was in Big Ten football. Each recap includes Brent?s superlative winners and the best stats, quotes and tweets, among other things, from around the Big Ten that particular week. Have a worthy stat, quote or tweet that you think should make the recap? Tweet it to @BTNBrentYarina. Watch our sideline interview with former Hawkeye Jared DeVries now and check out Brent's Week 7 Recap in this post.

Game of the Week: Michigan State 28, Michigan 14 – Aside from the uniforms both teams wore, this was an easy game to watch and enjoy; in fact, it was exactly what you'd expect from a bitter rivalry. The game was in doubt pretty much throughout and it went through its share of highs and lows, particularly late. On two occasions in the fourth quarter, Michigan had a chance to tie the score, only to give the ball back to Michigan State. The first time it happened on a 4th-and-1 deep in Spartans territory. The second time, Isaiah Lewis picked off a pass and returned it to the house with 4:31 left to essentially seal Michigan State's fourth consecutive win in the series.

Player of the Week: Montee Ball, Wisconsin – For the sixth time in as many games this season and the 10th straight regular-season game, dating back to last year, Ball scored at least two touchdowns Saturday. The Badger back scored three touchdowns, actually, and added his first career scoring pass, a 25-yarder to quarterback Russell Wilson. On just 16 touches, Ball amassed 212 total yards (13.3 yards per touch), and he accounted for a score on 25 percent of his touches. There's no telling what he and the rest of the Wisconsin starters would have done if they didn't go to the bench in the fourth quarter as a result of the blowout.

Team of the Week: Michigan State – The Spartans beat rival Michigan for the fourth consecutive time in Saturday's 28-14 victory at Spartan Stadium. Yes, that's four straight wins for the "Little Brother," as former Michigan running back Mike Hart famously referred to the Spartans. Of Michigan State's five wins in 2011, this one made the biggest impact – by far. Many critics questioned the team's top-ranked defense and weren't impressed with its schedule, but Michigan State proved its defense is legit (seven sacks, 10 tackles for loss) and that it can beat a ranked team. Its reward: White-hot Wisconsin comes to town next week.

Impression of the Week: Wisconsin-Michigan State will be something special – When Wisconsin visits Michigan State next week, it will pit the nation's hottest defense against the nation's hottest offense. Something's got to give. Will it be Michigan State's defense that has tallied 16 sacks and 23 tackles for loss the past two games, or will it be Wisconsin's offense that has averaged 50.2 points per game? We won't know for a week, but it will be fun listening to the experts break it all down. And it will be even more fun watching it transpire on the field. This one is shaping up to be the Big Ten's best game of the year.

Impression of the Week II: Michigan State's defense lives up to the hype – As good as Michigan State's top-ranked defense had played entering Saturday's game against Michigan, the only true test it had faced thus far was Notre Dame. The Spartans aced their latest and biggest test, baffling prolific Michigan in a 28-14 victory. Michigan State defenders were all over the field for a second consecutive game, this time tallying seven sacks and 10 tackles for loss, to go along with a pick-six. You name it, the Spartans defense did it – including a couple dirty plays that could result in suspensions. Regardless, Michigan State limited Michigan to 251 total yards – 57.3 under Denard Robinson's previous season average.

Impression of the Week III: Somehow, someway, Penn State gets it done – It isn't pretty, it hasn't come against good teams, but the Nittany Lions continue to do just enough to win. Following its victory over Purdue on Saturday, Penn State must be the quietest 6-1 team in the nation. Admittedly, a lot of the disrespect stems from the offense's struggles, the indecision at quarterback and the fact the Nittany Lions have only outscored their four BCS opponents, 63-58. Still, Penn State is getting it done, and it has its stout and timely defense and an improving Silas Redd to thank.

Impression of the Week IV: There's a huge gap between the best and the worst in the Big Ten – This is not breaking news, to be sure. Leading up to Saturday's Indiana-Wisconsin game, we all knew Wisconsin was really, really good and that Indiana, not to mention idle Minnesota, was really, really struggling under a first-year coach. But following Wisconsin's 59-7 victory over Indiana, the gap separating the top and the bottom of the conference is perhaps even bigger than we expected. This game wasn't as close as the 52-point margin indicates. The Badgers scored at will and in every possible way – on offense, defense and special teams, not to mention a trick play – and they did it without leading receiver Nick Toon, who was out with a left foot injury, and without their starters in the fourth quarter.

With its 28-14 victory over Michigan, Michigan State won its fourth straight over the Wolverines for the first times since 1959-62 and handed their rival their first loss for the third straight season.

In its last two games, the Michigan State defense has tallied 16 sacks and 23 tackles for loss.

Keshawn Martin, who entered Saturday's game with zero receiving touchdowns in his past 12 games, dating back to last season, had a pair of receiving scores on nearly identical plays against Michigan.

Wisconsin's first eight scoring drives took a total of 35 plays, and it scored a touchdown on offense, defense and special teams.

Nate Stupar, who entered Saturday's game against Purdue with two career interceptions, had a pair of picks against the Boilermakers.

Silas Redd eclipsed the 100-yard rushing mark for the third consecutive week, rushing for 131 yards in Penn State's win over Purdue. In the last three weeks, the Nittany Lion back has totaled 402 yards on the ground – good enough for an average of 134 yards per game.

The Buckeyes didn't complete their first and only pass until nearly two minutes into the fourth quarter (13:06) – a 17-yard touchdown reception to Jake Stoneburner. The last time Ohio State completed just one pass in a game: 1976 vs. Missouri.

With his fourth-quarter touchdown, Marvin McNutt tied Danan Hughes and Tim Dwight atop the list for most touchdown receptions (21) in Iowa history.

Iowa snapped a three-game losing skid to Northwestern in its 41-31 home victory.

Jeremy Ebert hauled in 13 passes, to go along with 107 yards and a score, giving him 24 catches in his last two games – both losses, however.

"It's kind of a nice job to have." – Bret Bielema, on having to decide whether to play starters in the fourth quarter of Saturday's 59-7 win over Indiana

"For the rest of our life, we can walk the streets of Michigan." – Kirk Cousins, on Michigan State seniors moving to 4-0 against instate rival Michigan.

"We're always fighting for respect. I feel even better about getting that tattoo now." – Jerel Worthy, on his Spartan-stomping-on-a-Wolverine tattoo following Michigan State's fourth straight win over Michigan.

"It was hard staying at home and watching the games." – Boom Herron, on returning from his six-game suspension to open the season.

"It was kind of funny, but we were all saying, 'Who cares?' We're up, and if we complete one pass, I'll take the catch." – Jake Stoneburner, on when the Buckeyes realized they hadn't completed a pass for the first three-plus quarters.

Scheelhaase intercepted by #OSU Roby (aka Jenkins-nothing-special) and Herron ran in for TD. #OSU 10, #Illini 0

Tough Loss today. We will bounce back please believe it! This was just a little bump in the road. Next up PURDUE!! #stayfocused

"Big Brother" just got their butt kicked by "Little Brother" for the 4th year in a row!!! MSUMICH

Would MSU get 2 wins in the standings for beating Michigan and itself at the same time?

Urban Meyer is surprisingly down on Michigan's two-QB system, considering he won a national championship with one.

Robinson's TD marks the 4th straight game that Michigan has reached the end zone on its opening drive.

How we feeling about these combat uni's? I think they at awesome!!! #gogreen

Starting to feel sorry for Bucky Badger who is doing push ups for every point scored again. I'm guessing he trained for this game.

Anything luck can do Russell does better lol

If Wisconsin scores 83 points on us again I will quit life. #IUFB

Silas Redd gets his 3rd straight 100-yard game, 4th of the season and 5th of his career. Posting 5.1 yards per carry so far on the day.

#PennState grabbed a season-high 3 interceptions vs. #Purdue. Last time with 3 was in win over Temple in 2010