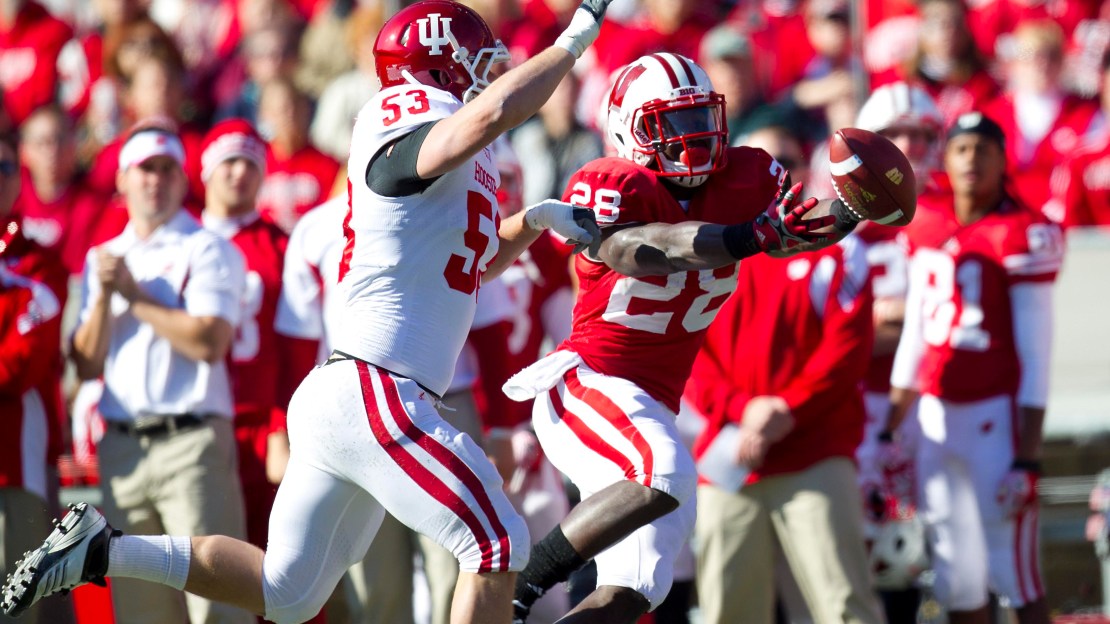 (AP) Quarterback Russell Wilson added a new chapter to his brief-but-growing legend, making a touchdown catch on a trick play as No. 4 Wisconsin routed Indiana 59-7 on Saturday. Wilson, who is being touted as a Heisman Trophy candidate by Wisconsin (6-0, 2-0 Big Ten), added another memorable moment to his resume when he caught a 25-yard score from running back Montee Ball in the second quarter. Ball had a huge day, rushing for three touchdowns. Wilson threw for 166 yards and a touchdown with 42 yards rushing. He was rested in the fourth quarter. Wisconsin was playing without top wide receiver Nick Toon, who sat out with a left foot injury. Read the full AP recap, see the box score and check out the Big Ten scoreboard.

FINAL: No. 4 Wisconsin's Montee Ball is one of the best tailbacks in the Big Ten, and he proved it against Indiana on Saturday, carrying the Badgers to a 59-7 victory at Camp Randall Stadium. Ball, who came in ranked No. 5 in the conference in rushing yards at 511 on the year, rushed 14 times for 141 yards and three touchdowns. Wisconsin's (6-0) offense dominated, ripping off huge chunks of yardage. Indiana's (1-6) defense gave up eight plays of at least 20 yards. With 2:47 to go in the third quarter, Ball turned a handoff into a 54-yard touchdown, the Badgers' longest play on the day. The long touchdown gave Wisconsin a 52-7 lead. The Badgers' Russell Wilson passed for 167 yards, completing 12 of 18 throws. He threw one touchdown and no interceptions. Wilson was also a threat on the ground, as he rushed for 42 yards on two attempts. Wisconsin's offense finished the game having gained 525 yards, including 193 passing yards on 14 completions. Rushing was a key ingredient in the Badgers' offensive mix, bringing them 332 yards on 42 carries. The Hoosiers racked up 288 total yards, including 80 yards passing while completing nine of 21 attempts. Indiana's ground game balanced its offense, bringing 208 yards on 44 attempts.

FOURTH QUARTER: Wisconsin's defense shut down Indiana, allowing only 15 yards of offense in the fourth quarter and the Badgers finished off the Hoosiers 59-7. Wisconsin sniffed out Indiana's rushing attack in the quarter, holding the Hoosiers to four rush yards. The Badgers went on a 31-point run to finish the game. Wisconsin made the score 59-7 when the Badgers recovered a fumble in the endzone.

THIRD QUARTER: Wisconsin ran for 61 yards in the quarter, and the Badgers now lead 52-7. Indiana has given up the last 24 points. Wisconsin made the score 45-7 when Jared Abbrederis returned a punt for a touchdown. The Badgers opened up the lead, 52-7, after marching down the field for a one-play, 54-yard drive that ended when Montee Ball turned a handoff into a 54-yard touchdown. Wisconsin's Ball rushed for 55 yards in the quarter to put him over 100 yards for the game. Ball has 141 total yards on the ground so far today. The Badgers will start the fourth quarter with the ball at their own 49-yard line.

SECOND QUARTER: With 24 points in the second quarter, Wisconsin now holds a 38-7 lead over Indiana. The Hoosiers have given up 10 straight points. The Badgers opened up the lead, 21-0, after marching down the field for a six-play, 65-yard drive that ended when Montee Ball and Russell Wilson hooked up for a 25-yard touchdown. Wisconsin added to its advantage when Ball turned a handoff into a 35-yard touchdown, the clincher of a five-play, 80-yard drive to give the Badgers the lead, 28-0. James White's 35-yard run from the 20-yard line pushed Wisconsin into enemy territory. Indiana closed the gap to 28-7 when Stephen Houston pounded in a 67-yard touchdown run to polish off a 75-yard drive. The Badgers made their lead 31-7 when Philip Welch kicked a 38-yard field goal on the last play of a seven-play, 59-yard drive. Wisconsin opened up the lead, 38-7, after marching down the field for a five-play, 39-yard drive that ended when Wilson threw a three-yard touchdown pass to Jacob Pedersen. The Badgers started in good field position when Aaron Henry intercepted a Edward Wright-Baker pass. The Hoosiers' Houston rushed for 79 yards in the quarter to put him over 100 yards for the game. Houston has 109 total yards on the ground so far today. Indiana will have possession to start the second half.

FIRST QUARTER: No. 4 Wisconsin's aerial assault is on point, as the Badgers lead 14-0 at the end of the first quarter thanks to 82 passing yards in the quarter. Wisconsin struck first when Montee Ball ran five yards to paydirt, the final play of a nine-play, 84-yard drive. The key play on the Badgers' drive was Russell Wilson's 46-yard pass to Ball. Wisconsin made its lead 14-0 when James White pounded in a 16-yard touchdown run on the last play of a two-play, 26-yard drive. The Badgers began the drive with good field position after Bradie Ewing returned a punt. Indiana has the ball on Wisconsin's 34-yard line to begin the second quarter.

Offense, defense and special teams have all scored TDs for #Badgers today.

Bug is to windshield as Indiana is to Wisconsin. 38-7 half.

Indiana RB Stephen Houston's 67-yard TD is the longest of his career. His previous long was 19 yards.

Starting to feel sorry for Bucky Badger who is doing push ups for every point scored again. I'm guessing he trained for this game.

The two worst punts in the country this season have occurred at Camp Randall by Wisconsin opponents.

Anything luck can do Russell does better lol

If Wisconsin scores 83 points on us again I will quit life. #IUFB