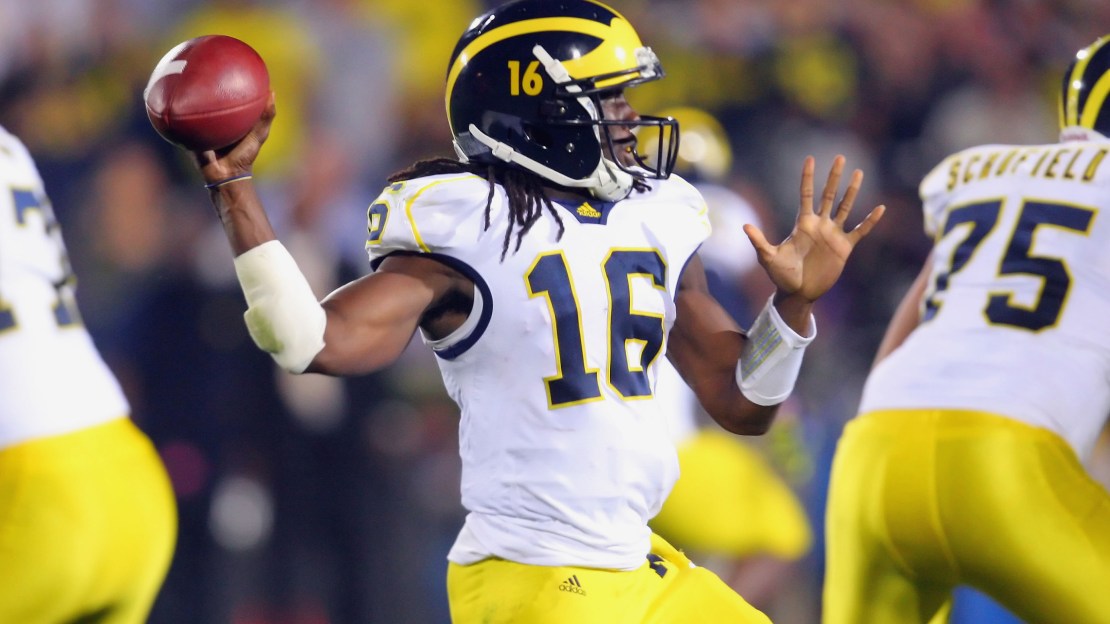 The Big Ten is set to record a first this week - a first that might fly under the radar but one that could play a significant role in determining which two teams square off in the first-ever Big Ten Championship Game on Saturday, Dec. 3. For the first time ever every conference game this weekend is also a divisional game.  Remember, the divisional record is the next tie-breaker when a multiple-team tie can?t be broken by head-to-head record.  A three-way tie seems eminently possible in the Legends Division where parity may reign (see full tiebreaker rules at BigTen.org).

Let?s start there, with the showdown between Michigan and Michigan State.

Brady Hoke improved to 6-0 as Michigan?s head coach last Saturday, with a come-from-behind win over Northwestern. While Hoke is still 23 wins away from tying Fielding Yost for the most consecutive victories to start a Michigan coaching career (I?m going out on a limb and say he doesn?t get there), it?s been a while since anyone in the conference has gotten to this point with an unblemished mark.

1979: The last Big Ten head coach to start his tenure at a conference school with 6 straight wins was Ohio State?s Earl Bruce, who led the Buckeyes to a perfect 11-0 regular season in 1979 before falling to USC in the Rose Bowl.

It?s been even longer since a new Michigan head coach has beaten the Spartans in his first match-up.

1948: The last five Michigan head coaches have fallen to Michigan State the first time they?ve faced them. Bennie Oosterbaan was the last to beat them - winning 13-7 in his first-ever game with the Wolverines back in 1948.

Hoke has a great chance at joining Oosterbaan - thanks to Michigan?s overpowering offense and its vastly improved defense.

They face a Spartan team that struggled offensively last time out.

1985: Michigan State?s point total in its 10-7 win over Ohio State was the fewest the Spartans have scored in a victory since topping Western Michigan 7-3 in 1985.

1959-62: The Spartans are looking for their fourth straight win over the Wolverines. It would be the first time they?ve won four in a row in the series since 1959-62. They have never won five straight.

That game is one of two this weekend that features teams that have yet to lose a conference game. The other, interestingly enough, is Penn State and Purdue.

The Nittany Lions have gotten there thanks to a vastly improved defense.

1978: Penn State has held five of its first six opponents to 10 points or less.  It?s the first time they?ve pulled that off since the 1978 team that played for the National Championship - falling to Alabama in the Sugar Bowl.

While the Boilers "unbeaten" conference mark is likely a function of schedule more than strength (they?ve only played one game, and it was against Minnesota), they have shown tremendous improvement in one area that plagued them last season.

27, 4: The Boilers had 27 turnovers last year, second most in the Big Ten behind only Michigan. This year, they have committed just 4 - tied for second fewest in the conference behind only Wisconsin.

Speaking of the Badgers, there?s a lot more to their success than just a low turnover total. For instance, there?s the Russell Wilson factor.

That nugget comes from Wisconsin?s Director of Athletic Communications, Brian Lucas, whose game notes always contain a few gems. I?d include this one in that group as well:

27, 31:  Five Top 10 teams have lost a game this year. Four of those losses came by a combined total of 27 points.  The fifth was Wisconsin?s 31 point win over Nebraska.

89.7: Among the many reasons for Wisconsin?s success - the Badgers? 89.7 percent Red Zone touchdown percentage. That is second best nationally. They finished second in the nation in that category last season.

20th, 76th:  The Badgers? opponent this week, Indiana, has had some success defensively in that situation.  They are 20th in the nation in Red Zone touchdown percentage defense, having allowed just 11 TDs in their opponents? 24 trips inside their 20 yard-line.  They were 76thnationally in that category last season.

Of course, the Red Zone TD percentage doesn?t really help you when you?re allowing TD receptions of 77 and 67 yards, as the Hoosiers did last week to Illinois? A.J. Jenkins.  Perhaps the fact that they?re not alone will provide some solace.

450: Jenkins has 450 combined receiving yards over the last two weeks in wins over Indiana and Northwestern.  That is an all-time Big Ten record for a two-week span.

The Illini are getting it done on defense as well.

21: Illinois has forced at least one turnover in 21 straight games. That is the longest active streak in the nation.

The streak Illini fans are more concerned about is their seven-game winning streak, the program's longest since the 1983 Rose Bowl team won ten in a row. So can they keep it going against the Buckeyes? This season?s results would tell us they can, as would history.

9, 11: Illinois has beaten Ohio State 9 times since 1988. Only Michigan, with 11, has more victories against the Buckeyes in that span.

That 1988 year came into play for the Buckeyes last weekend, after both Rex Burkhead and Taylor Martinez went over 100 yards rushing on them.

1988: It was the first time they Buckeyes have allowed two 100-yard rushers in the same game since 1988, when Michigan?s Leroy Hoard and Tony Boales pulled it off in the Wolverines? 34-31 win.

Northwestern has had some issues against the run as well.

That?s not the only area where Northwestern's defense has struggled.

54.8: Wildcats? opponents are converting on 54.8 percent of their third down opportunities - that is 117th nationally. Michigan was a staggering 14 of 17 last week.

Northwestern?s opponent this week, Iowa, has been better - but not by much.

44.9: The Hawkeyes? opponents are converting at a 44.9 percent rate on third down. That?s 96th nationally.

So we should likely not expect a great defensive struggle when the Hawks and Wildcats get together Saturday night at 7 p.m. ET on BTN. That game is one of two we have for you on Saturday. We start things off with the Big Ten Football Saturday Pregame Show presented by Auto Owners Insurance, back in its regular slot at 10:30 a.m. ET.  After that, it?s Purdue and Penn State, followed by an hour-long State Farm Postgame. We?ll be back at 6 p.m. ET with another pregame, and we?ll wrap things up with The Final Drive presented by Sprint after the ?Cats and Hawkeyes. See you then.