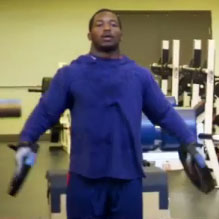 What goes on behind the scenes at the Illinois football program? Tuesday night our crew from The Next Level profiled Lou Hernandez, the Illinois strength and conditioning coach who has helped several Illinois players make an impact in the NFL. Watch the video profile here and check out our entire collection of Big Ten video feature stories inside, including this feature on Wisconsin's strength and conditioning coach.

It's also been another busy week at BTN, and we're only halfway to Saturday's Big Ten football games. Dave Revsine checks in with his weekly Numbers column and he has some delicious figures. For example, can you name the last Big Ten coach to win his first six games on the job? Find out now. Also, we interviewed Penn State football's Devon Still, profiled Nebraska volleyball's Lara Dykstra, and Iowa's Dan Gable. Couldn't catch Tuesday night's Big Ten Icons? Bookmark our TV schedule, because it will air again.