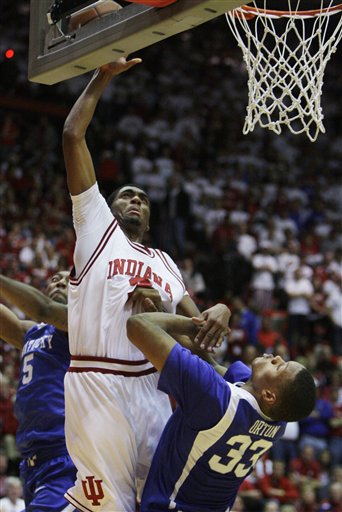 According to an Indiana press release, junior guard Maurice Creek underwent surgery Monday to repair a torn Achilles' tendon he suffered away from the basketball court in his left leg. His status for the upcoming season has not been determined.

This marks the third serious injury Creek has suffered in the past 22 months. He had surgery to repair a broken left patella in late December of 2009 and last year he was shut down after a stress fracture in his right patella ended his season in January. "This is a devastating blow for someone who has worked so hard to get himself in a position to help this program again," Crean said in the statement. "He is going to receive the best medical care possible and we will take his recovery one day at a time. I think the most important thing that we can do is to make Maurice know that despite his injury, he can serve a very vital role in helping our program and we will actively keep him involved every day."

In 30 career games, Creek is averaging 11.5 points and is shooting 37.1 percent from three-point range. He broke out as a freshman, averaging 16.4 points per game, including 31 against national power Kentucky.

Read the full release at IUHoosiers.com.

Everybody pray for my homie @CallMeMC3 to have a speedy recovery…Stay Strong fam!!!

All my Hoosier fans show @CallMeMC3 some love and let him know were behind him. #hoosiersunited

ONCE AGAIN THANK YOU 2 EVERYONE THAT SUPPORTING ME..I LOVE YALL…YALL ARE REALLY KEEPING MY SPIRITS HIGH

Maurice Creek was leading all freshmen scorers as of Dec. 28, 2009, when he suffered a fractured patella against Bryant. #Indiana #Hoosiers