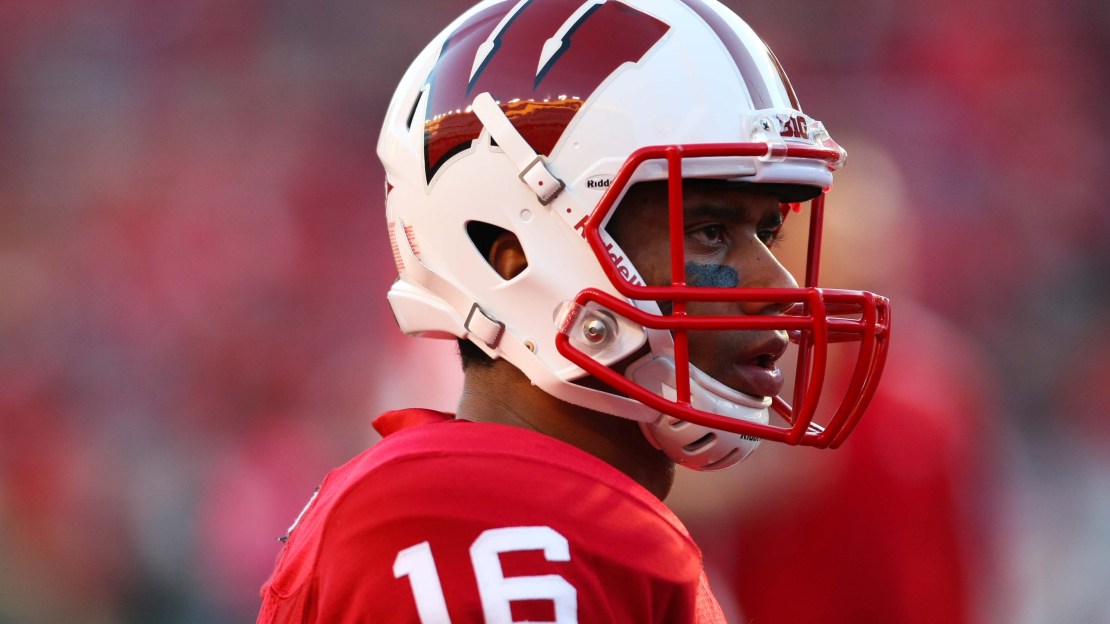 Six games in, six games to go. We officially reached the midway point of the 2011 college football season following the completion of Saturday's slate of games. It's been an eventful first half, for sure, as Illinois and Michigan are off to surprising 6-0 starts and perennial power Ohio State is 3-3, including 0-2 in Big Ten play. And we can't forget to mention Wisconsin, the Big Ten's clear favorite after humiliating its first five foes by a combined score of 242-51. Seeing as how we're halfway home, I wanted to rank the conference's top 10 players thus far. See the list in this post.

1. Russell Wilson, Wisconsin (83-111, 74.8%, 1,391 yards, 13 TDs; 22 car., 140 yards, 2 TDs) – Wilson has exceeded all expectations in his first five starts as a Badger – so much so that a Wisconsin quarterback is being mentioned as a Heisman Trophy candidate. When was the last time you could say that? Wilson makes it all look so simple that it almost doesn't seem fair.

2. Denard Robinson, Michigan (67-117, 57.3%, 1,130 yards, 10 TDs; 102 car., 720 yards, 8 TDs) – The conference's most important player to his team, Robinson continues to torch defenses and set records in the process. The prolific junior leads the conference in rushing yards and boasts a pair of 300-yard passing games, both coming in comeback wins over Notre Dame and Northwestern.

3. Whitney Mercilus, Illinois (24 tackles, 10.5 TFL, 8.5 sacks, 4 FFs) – Where did this guy come from? No one was talking about the Illini defensive lineman entering the season, but now this human wrecking ball is the focal point of every opponent's scouting report – and for very good reason.

4. A.J. Jenkins, Illinois (46 rec., 815 yards, 7 TDs) – In a conference loaded with talented wide receivers, Jenkins is the cream of the crop. The Illini leads the conference in receptions, yards and receiving touchdowns, and his 233-yard lead over Michigan State's B.J. Cunningham marks the biggest margin between all BCS conferences' No. 1 and No. 2 wideouts.

6. Devon Still, Penn State (30 tackles, 9 TFL, 2 sacks, 1 FR) – The anchor of the Big Ten's, and perhaps the nation's, least talked-about defense has taken his game to a new level this season. Still's nine tackles for loss are second only to Illinois' Whitney Mercilus, and he's been the biggest reason for the Nittany Lions' vastly improved defense, which ranks fifth in the FBS in points per game (10.5).

7. Rex Burkhead, Nebraska (107 car., 635 yards, 9 TDs; 8 rec., 68 yards, 1 TD) – It's official: Burkhead is a cult hero among Nebraska fans. Nebraska's favorite Husker gives fans plenty of reason to adore him, what with his approach, leadership, off-the-field work and performance inside the lines.

9. Peter Konz, Wisconsin – It's always a tough task to rank the best offensive linemen, considering the lack of stats and all, but Konz anchors a Wisconsin line that has paved the way for the Badgers to score 34 touchdowns and average 48.4 points per game, both good enough for No. 3 among FBS teams.

10. Mike Taylor, Wisconsin (44 tackles, 4 TFL, 1 sack, 1 INT, 1 FF) – Taylor and sidekick Chris Borland give Wisconsin one of the Big Ten's best duos at linebacker. Picking one over the other is difficult, however Taylor leads the No. 4 Badgers in tackles, averaging 8.8 per game, and his timely interception against Nebraska sparked the rout in the Big Ten's biggest game of the season.