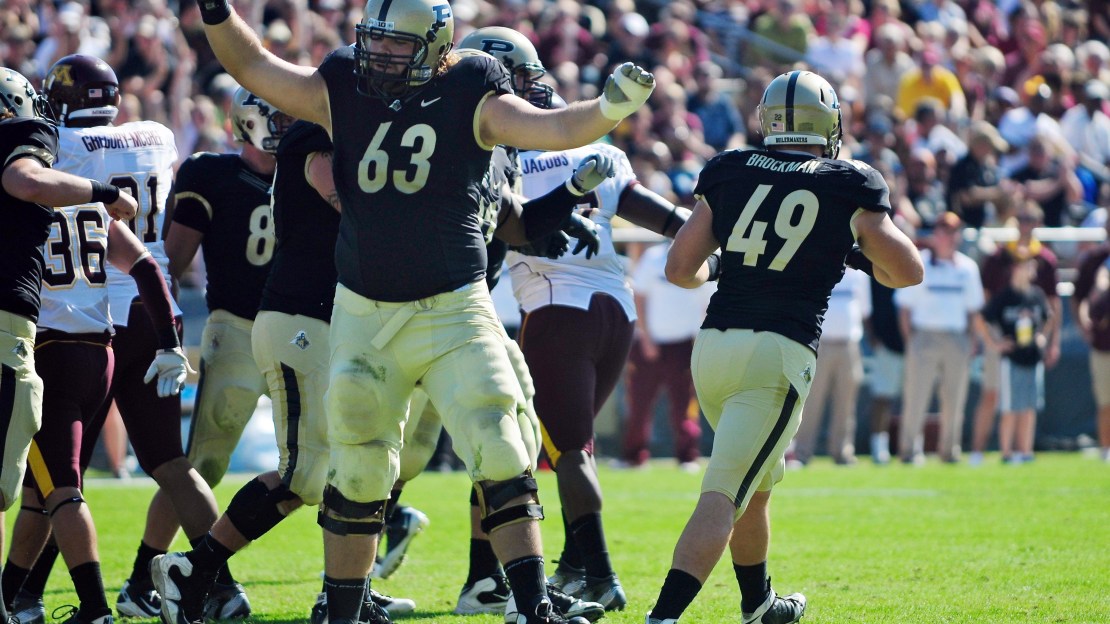 Purdue notched a blowout win over Minnesota, 45-17 on Saturday at Ross-Ade Stadium. Purdue (3-2) mounted enough of a lead in the first quarter to hang on for the victory. The Boilermakers' explosive offense used big plays to take down Minnesota (1-5). Purdue had four plays of 20 yards or more on its way to victory. With 2:47 to go in the third quarter, Akeem Hunt ran 30 yards, the Boilermakers' biggest gain of the game. The big play set up an 11-play drive that gave Purdue a 45-3 lead after Raheem Mostert ran 25 yards to paydirt.

Caleb TerBush threw for 139 yards while completing 14 of 21 passes for the Boilermakers. TerBush finished the game with one touchdown and no interceptions. TerBush's favorite target on the day was O.J. Ross. He caught five passes for 63 yards and one touchdown.

Purdue racked up 370 total yards, including 155 yards passing while completing 18 of 27 attempts. The Boilermakers also rushed 47 times for 215 yards.

Below is the quarter-by-quarter recaps compiled during the game. Also: BOX SCORE | PLAY-BY-PLAY | AP RECAP

FOURTH QUARTER: Purdue finished off its blowout of Minnesota with a strong fourth quarter and won 45-17. The Golden Gophers went on a 14-point run to close the game.

Minnesota made the score 45-17 after MarQueis Gray kept it himself for a one-yard touchdown run to finish off a 78-yard drive.

THIRD QUARTER: Thanks to a mean rushing attack, Purdue now leads 45-10. the Boilermakers rushed for 125 yards in the quarter. Purdue's defense held tough in the quarter, holding Minnesota to 14 total yards of offense.

The Boilermakers expanded their lead to 38-3 thanks to a 12-play, 86-yard drive that ended when Caleb TerBush and Akeem Shavers combined for a 10-yard touchdown.

Purdue opened up the lead, 45-10, after Raheem Mostert pounded in a 25-yard touchdown run to end a seven-play, 86-yard drive. The Boilermakers crossed midfield on Akeem Hunt's 30-yard run from the 25-yard line. The rushing attack provided every yard for Purdue during that series.

The Boilermakers will start the fourth quarter with the ball at their own 33-yard line.

SECOND QUARTER: Purdue looks to be in control of the game as it leads 31-3 at the end of the second quarter. The Boilermakers expanded their lead to 31-0 thanks to a 10-play, 70-yard drive that ended when Robert Marve found O.J. Ross open for a 12-yard touchdown pass.

A 44-yard drive that ended when Chris Hawthorne made a 46-yard field goal helped Minnesota narrow the deficit to 31-3.

Purdue will get the ball to start the second half.

FIRST QUARTER: Thanks to 24 points in the first quarter, Purdue has a secure 24-0 lead. The Boilermakers scored when Ralph Bolden turned a handoff into a two-yard touchdown to put a bow on a seven-play, 39-yard drive, giving Purdue the game's first lead. The Boilermakers started in good field position when Purdue returned a punt.

The Boilermakers made their lead 10-0 when Carson Wiggs kicked a 53-yard field goal on the last play of a 10-play, 36-yard drive. Purdue ran just two times during that march downfield.

The Boilermakers opened up the lead, 17-0, after marching down the field for a six-play, 11-yard drive that ended when Akeem Shavers ran one yard to paydirt. A fumble recovery by Purdue set the Boilermakers up to start the drive. Purdue threw just one time on that possession.

The Boilermakers made the score 24-0 when Ricardo Allen intercepted a MarQueis Gray pass and returned it for a touchdown.

Minnesota has the ball on its own 26-yard line to begin the second quarter.

Editor's note: Working with our partners at Stats LLC and Narrative Science, we update this story with game details after every quarter.

#Gophers kick off in a half hour here in #Purdue! Check out some pregame sights in our Facebook album: http://t.co/tayXDMsV

Shortell and Gray are sharing snaps with the first-team offense.

And use the links below to get caught up on these two teams.