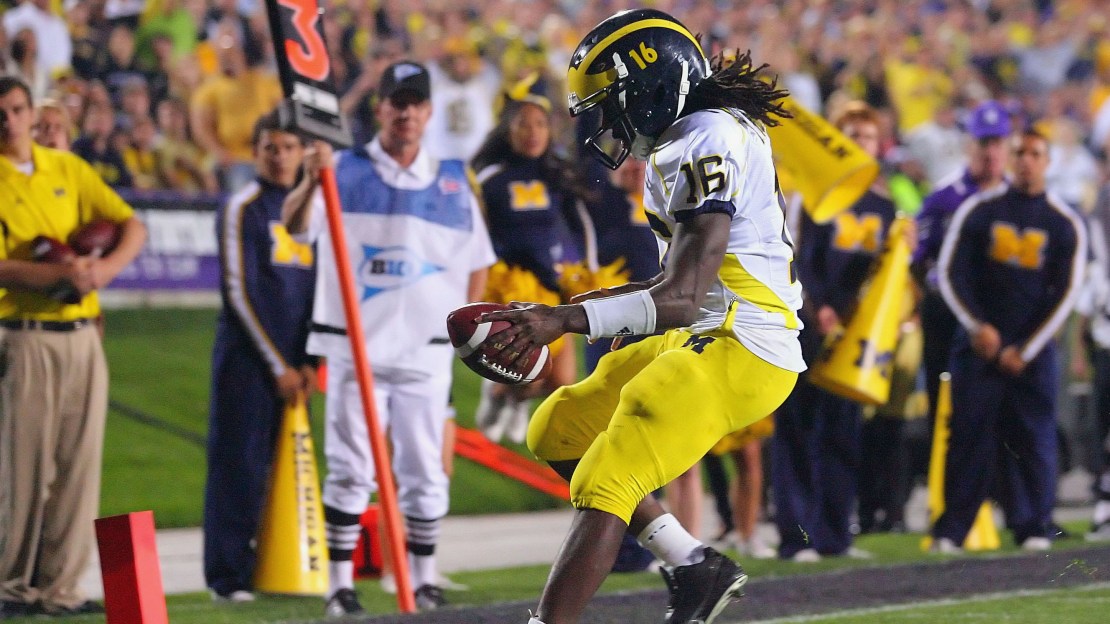 Northwestern's had no answer for Denard Robinson, who ran wild to lead No. 11 Michigan to a 42-24 victory on Saturday at Ryan Field. Robinson, who came in ranked No. 1 in the conference in rushing yards at 603 per game, rushed 25 times for 113 yards and two touchdowns. Michigan's (6-0) passing game looked unstoppable at times against Northwestern's defense. The Wolverines' air attack couldn't be contained, as they torched Northwestern (2-3) for 362 yards and two touchdowns.

Home run plays keyed Michigan's scoring attack. The Wolverines had nine plays of 20 yards or more on their way to victory. Michigan added to the highlight reel when Robinson found Roy Roundtree open for a 57-yard pass with 13:11 left in the third quarter. The big gainer was part of a 10-play drive capped off when Robinson kept it himself for a one-yard touchdown run. That cut the Wildcats' lead to 24-21.

Ibraheim Campbell showed good hands on defense for Northwestern, picking off two Michigan passes. On a critical drive in the second quarter, he on second-and-6.

The Wildcats racked up 440 total yards, including 334 yards passing while completing 32 of 46 attempts. Northwestern's ground game balanced its offense, bringing 106 yards on 25 attempts.

Robinson threw for 338 yards while completing 17 of 26 passes for the Wolverines. Robinson finished the game with two touchdowns and three interceptions. Junior Hemingway was a key target for Robinson. He hauled in five catches for 123 yards.

FOURTH QUARTER: Michigan's Michael Shaw led the offense in the fourth quarter. He ran for 23 yards and one touchdown and the Wolverines closed the door on Northwestern 42-24.

Michigan ended the game on a 28-point run.

The Wolverines opened up the lead, 35-24, after marching down the field for a six-play, 47-yard drive that ended when Shaw turned a handoff into a three-yard touchdown. Michigan started in good field position when Brandin Hawthorne intercepted Dan Persa's pass.

The Wolverines added to their advantage when Denard Robinson scrambled for a five-yard touchdown run, the final play on a nine-play, 52-yard drive to give Michigan the lead, 42-24.

THIRD QUARTER: Northwestern is hanging tough with Michigan, down 28-24 at the end of the third quarter despite a matchup most presumed to be a blowout. The Wolverines have scored the last 14 points.

Michigan finished off an 80-yard drive when Denard Robinson turned a quarterback sneak into a one-yard touchdown run to make the score 24-21. The Wolverines' drive was highlighted by Robinson's 57-yard pass.

The Wildcats' Dan Persa hit 200 yards passing for the game in the quarter, part of his 219-yard passing performance thus far.

The Wolverines' Robinson topped 100 yards rushing for the game in the quarter, and has plenty of time to add to his 113 total yards on the ground.

Michigan's Robinson reached the 200-yard passing mark for the game thanks to 103 in the quarter, and currently sits with 290 yards in all.

The Wolverines are threatening to score to start the fourth quarter and have the ball at Northwestern's three-yard line.

SECOND QUARTER: Michigan is on upset alert at the end of the second quarter, trailing Northwestern by a score of 24-14.  The Wildcats have erupted for 10 straight points.

The Wolverines tied the score at 14 apiece after Denard Robinson threw a 25-yard touchdown pass to Jeremy Gallon to clinch an eight-play, 67-yard drive. Michigan kept the ball on the ground during the drive, throwing only one pass.

Adonis Smith ran two yards to paydirt to break the 14-14 standoff in favor of Northwestern. The play capped off a seven-play, 82-yard scoring drive. The Wildcats used Dan Persa's 39-yard pass to fuel the drive. Persa's 20-yard pass to Drake Dunsmore took Northwestern from the 39 and across midfield to ignite the drive. The Wildcats ran just one time during that march downfield.

Northwestern expanded its lead to 24-14 thanks to a seven-play, 49-yard drive that ended when Jeff Budzien kicked a 20-yard field goal. The Wildcats squandered an opportunity to score a touchdown, missing a chance to score from the Wolverines' three-yard line before settling for the field goal. Northwestern ran just one time on that drive.

Michigan's Junior Hemingway hit 100 yards receiving for the game in the quarter, part of his 105-yard, four-reception performance thus far.

The Wolverines are set to receive to start the second half.

FIRST QUARTER: A potential upset may be brewing as Northwestern leads No. 11 Michigan 14-7 at the end of the first quarter. The Wildcats are currently on a 14-point run.

The Wolverines scored when Denard Robinson and Steve Watson combined for a nine-yard touchdown to polish off an eight-play, 74-yard drive, giving Michigan the game's first lead. The Wolverines' drive was highlighted by Robinson's 48-yard pass to Junior Hemingway.

Northwestern tied the game at seven after Kain Colter took a quarterback draw all the way for a 15-yard touchdown run to end a seven-play, 80-yard drive.

The Wildcats broke the 7-7 tie when Treyvon Green turned a handoff into a seven-yard touchdown to finish off an eight-play, 63-yard scoring drive.