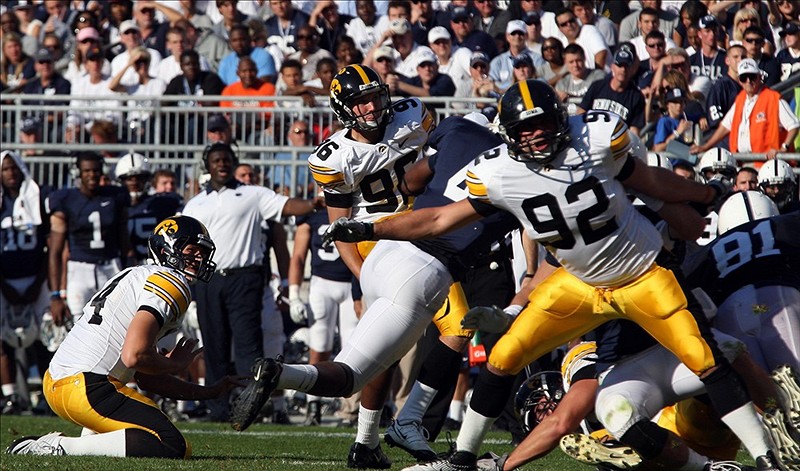 Points were at a premium for both Penn State and Iowa, but in the end it was Penn State (5-1) who came away with a 13-3 victory on Saturday at Beaver Stadium. Iowa (3-2) found yardage hard to come by as the Nittany Lions' defense clamped down throughout the contest. Penn State's defense allowed just 253 total yards as it frustrated the Hawkeyes' offense. Silas Redd carried the offensive load for the Nittany Lions, piling up 142 rushing yards on 28 attempts.

Matthew McGloin threw for 133 yards while completing 12 of 19 passes for Penn State. McGloin finished the game with one touchdown and one interception.

The Nittany Lions racked up 394 total yards, including 164 yards passing while completing 15 of 26 attempts. Penn State also moved the ball on the ground, earning 230 yards on 46 attempts.

FOURTH QUARTER: Penn State put on a defensive clinic in the fourth, as Iowa finished with negative rushing yardage (-11 yards), and the Nittany Lions closed the door on the Hawkeyes 13-3.

Penn State made its lead 13-3 when Matthew McGloin found Kevin Haplea open for a two-yard touchdown pass on the last play of an 11-play, 49-yard drive. The Nittany Lions started in good field position when Penn State recovered a fumble.

The Nittany Lions' Silas Redd rushed for 43 yards in the quarter to put him over 100 yards for the game. Redd finished with 142 yards on the ground.

THIRD QUARTER: The teams combined for no points and one turnover in an ugly third quarter and the margin is still three, as Penn State leads 6-3. Iowa will start the fourth quarter with possession at the Nittany Lions' 48-yard line.

Iowa tied things up at three when a 12-play, 72-yard drive ended after Mike Meyer made a 22-yard field goal. James Vandenberg's 20-yard pass to Marvin McNutt took the Hawkeyes from the 40 and across midfield to ignite the drive.

The Nittany Lions are set to receive to start the second half.

Iowa has the ball at its own 40-yard line to begin the second quarter.