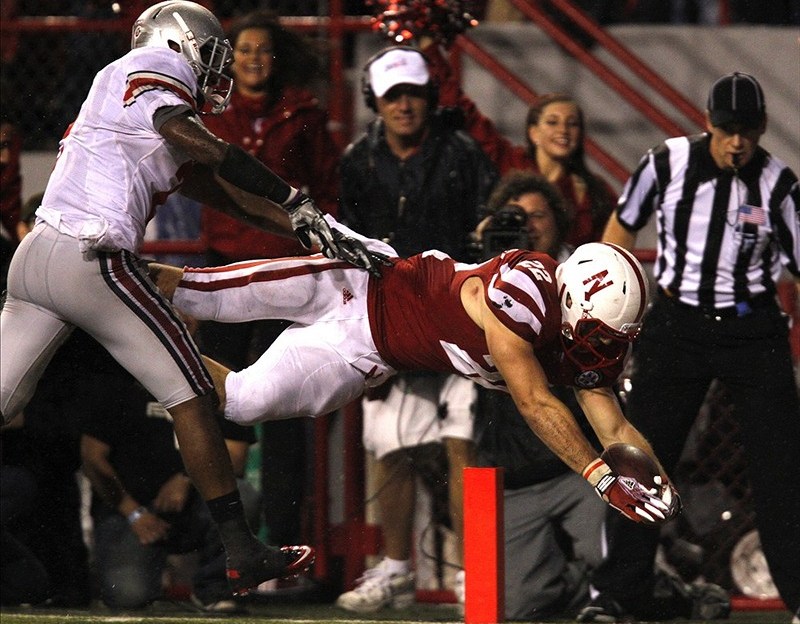 One of the best running backs in the Big Ten, No. 15 Nebraska's Rex Burkhead ran all over Ohio State, carrying Nebraska (5-1) to a 34-27 victory on Saturday at Memorial Stadium. Burkhead, who came in ranked No. 2 in the conference in rushing yards at 516 per game, rushed 26 times for 119 yards and one touchdown. Things looked grim for the Cornhuskers, but Nebraska stormed back to clinch the victory in Nebraska's biggest comeback in school history. The Cornhuskers climbed back from a 21-point deficit to pull off the comeback.

Nebraska's offense dominated, ripping off huge chunks of yardage. The Cornhuskers had four plays of 20 yards or more on their way to victory. With 1:52 to go in the third quarter, Taylor Martinez and Quincy Enunwa hooked up for a 36-yard touchdown, Nebraska's longest play on the day. The long touchdown cut Ohio State's (3-3) lead to 27-20.

Martinez threw for 190 yards while going 16-22 for the Cornhuskers. He tossed two touchdowns and one interception. Martinez also ran for 95 yards on 16 attempts. Martinez's favorite target on the day was Burkhead. He caught five passes for 59 yards and one touchdown.

Nebraska's offense finished the game having gained 422 yards. In addition to Martinez's efforts through the air, the Cornhuskers also rushed 51 times for 232 yards.

The Buckeyes' offense finished the game having gained 350 yards, including 107 passing yards on six completions. Ohio State also moved the ball on the ground, earning 243 yards on 41 attempts.

FOURTH QUARTER: At one point Nebraska trailed by 21 points, but the Cornhuskers mounted a comeback to win 34-27.

With 9:22 to go in the third quarter Nebraska looked to be in trouble, but it stormed back to take the lead.

The Cornhuskers went on a 28-point run to end the game.

Nebraska tied the game at 27 after Taylor Martinez tossed a 30-yard touchdown to Rex Burkhead to end a seven-play, 72-yard drive.

Burkhead ran 17 yards to paydirt to break the 27-27 stalemate in favor of the Cornhuskers. The play put a bow on a three-play, 78-yard scoring drive.

Nebraska's Burkhead topped 100 yards rushing for the game in the quarter, and finished his day with 119 yards on the ground.

Ohio State's Carlos Hyde reached the 100-yard rushing mark for the game thanks to 16 in the quarter, and ended his day with 104 yards in all.

THIRD QUARTER: In the third quarter, Ohio State's Carlos Hyde stood out. He ran for 15 yards and one touchdown and the Buckeyes now lead 27-20. The last 14 points have been scored by Nebraska.

Ohio State opened up the lead, 27-6, after Hyde pounded in a one-yard touchdown run to end a seven-play, 47-yard drive. The Buckeyes started in good field position when Ohio State returned a punt.

The Cornhuskers polished off a 23-yard drive when Taylor Martinez scrambled for an 18-yard touchdown run to make the score 27-13. Nebraska began the drive with good field position after the Cornhuskers recovered a fumble.

Nebraska made the score 27-20 after Martinez found Quincy Enunwa open for a 36-yard touchdown pass to finish off an 80-yard drive. Martinez's 20-yard pass to Kenny Bell from the 33-yard line pushed the Cornhuskers into enemy territory.

The Buckeyes have the ball at Nebraska's 32-yard line to begin the fourth quarter.

SECOND QUARTER: Thanks to a mean rushing attack, Ohio State now leads 20-6. the Buckeyes rushed for 105 yards in the quarter. Ohio State's Carlos Hyde ran for 69 yards and one touchdown in the quarter.

The Buckeyes opened up the lead, 17-3, after marching down the field for a one-play, 58-yard drive that ended when Hyde turned a handoff into a 63-yard touchdown.

A 40-yard drive that ended when Brett Maher kicked a 34-yard field goal helped Nebraska narrow the deficit to 17-6.

Ohio State added to its advantage when Drew Basil made a 35-yard field goal, the clincher of a two-play, 29-yard drive to give the Buckeyes the lead, 20-6. An interception by Orhian Johnson set Ohio State up at the Nebraska 47-yard line to start the drive.

The Cornhuskers will start the second half with the ball.

FIRST QUARTER: The offense led Ohio State to 10 first-quarter points, and the Buckeyes lead 10-3 at the end of the first quarter. Ohio State finished with 68 yards through the air and 73 on the ground in the quarter.

The Buckeyes took the game's first lead after Drew Basil made a 41-yard field goal on the last play of a 13-play, 56-yard drive. Ohio State threw just three times during that series.

No. 15 Nebraska got even after Brett Maher drilled a 50-yard field goal to end a four-play, 21-yard drive that tied the score at three.

A seven-play, 80-yard scoring drive by the Buckeyes snapped the 3-3 deadlock, as Braxton Miller and Jake Stoneburner hooked up for a 32-yard touchdown.

The Cornhuskers will start the second quarter with the ball on their own 38-yard line.