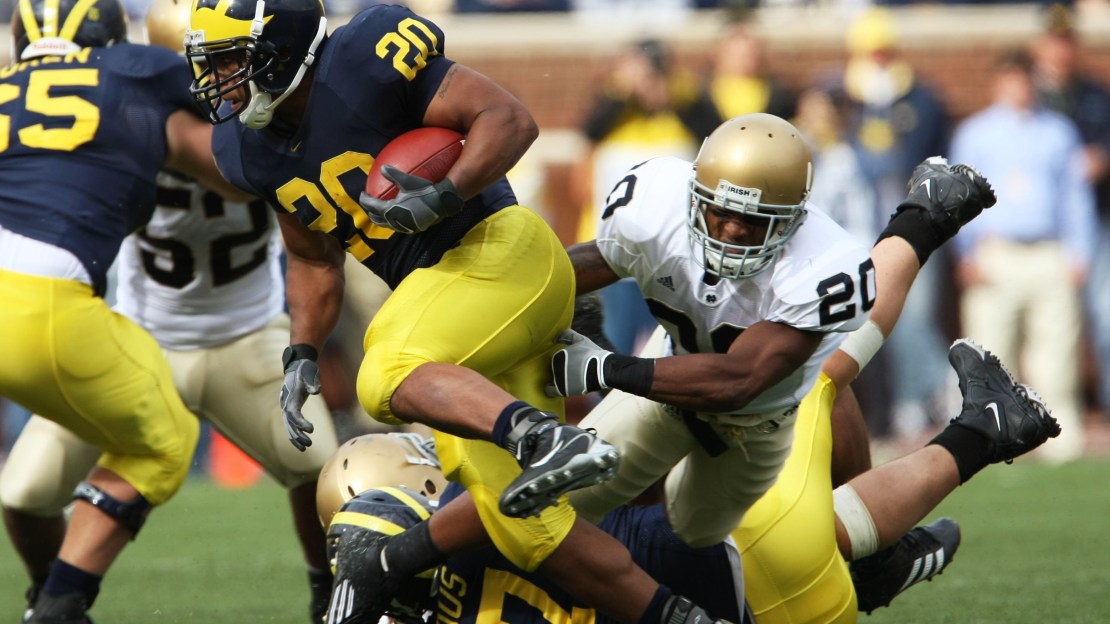 From Archie Griffin to Eddie George to Ron Dayne to many others, the Big Ten always seems to boast its share of nationally acclaimed running backs. While no Big Ten back took home the Heisman Trophy during the 2000s, there were worthy candidates. For example, Mike Hart, who finished fifth in 2006, after rushing for 1,562 yards and 14 touchdowns, or Larry Johnson, who in 2002 became the first back to rush for more than 2,000 yards in a season (2,087) and not bring home the trophy. Throughout the decade, Big Ten backfields had great talents, and that?s clear when one takes a look at our top 10 list. Watch a clip from Tuesday's show and see the complete list in this post.

Mike Hart, MICHIGAN
-For his career, rushed 1,015 times for 5,040 yards, both Michigan records, and 41 TD
-Set a Michigan record for most rushing yards in a season by a freshman with 1,455
-Rushed for 1,562 yards, the fifth-best season total in Michigan history, and 14 touchdowns in 2006
-Placed fifth in the Heisman Trophy balloting in 2006
-Ran for at least 100 yards 28 times and 200 yards five times, both Michigan records

Larry Johnson, PENN STATE
-417 rushes, 2,782 yards, 25 TD
-First player to rush for more than 2,000 yards in a season (2002) and not win the Heisman Trophy
-As a senior  won the Doak Walker Award (top running back), the Maxwell Award (top college player), and the Walter Camp Award (top college player)
-Broke the Penn State record for rushing yards in a game three times in 2002 (257 vs. Northwestern, 279 vs. Illinois, 327 vs. Indiana)
-Ran for 279 yards in the first half against Michigan State in 2002 before spending the rest of the game on the bench

Chris Perry, MICHIGAN
-Finished career at Michigan fifth on the school's career rushing list with 3,696 yards and third in rushing touchdowns with 39
-As a senior, rushed for 1,674 yards and 18 TDs to win Doak Walker Award (top running back) and finish fourth in Heisman Trophy voting
-Set a Michigan game record with 51 carries in a 27-20 win over Michigan State on November 1, 2003

Javon Ringer, MICHIGAN STATE
-Rushed for 4398 yards in his career, averaging  4.1 yards per carry, and scored 34 TD
-As a freshman, finished with 122 carries for 817 yards, the second-best single-season rushing total by a true freshman in school history
-Ran for 1,447 yards as a junior, becoming the first Spartan to eclipse the 1,000-yard barrier since 2001 (T.J. Duckett)
-As a senior, became the first player to win Big Ten Offensive Player of the Week three consecutive weeks

Shonn Greene, IOWA
-Ran for 1,850 yards and 20 touchdowns in his lone season
-Won the 2008 Doak Walker Award (top running back) and Big Ten Offensive Player of the Year
-Only player in FBS to eclipse 100-yard mark in every game during 2008 season
-Won 2009 Outback Bowl Most Valuable Player

John Clay, WISCONSIN
-629 rushes, 3,412 yards, 41 TD
-Ran for 884 yards on 155 carries and nine touchdowns as a freshman
-Led the Big Ten and ranked eighth in the country with 1,517 rushing yards as a sophomore. His 18 rushing touchdowns also led the Big Ten and tied for seventh in the nation
-Won the 2009 Big Ten Offensive Player of the Week
-Ran for a career-high 184 rushing yards and scored three TDs against rival Minnesota as a sophomore
-Battled injuries as a junior, but ran for 1,012 yards and 14 touchdowns