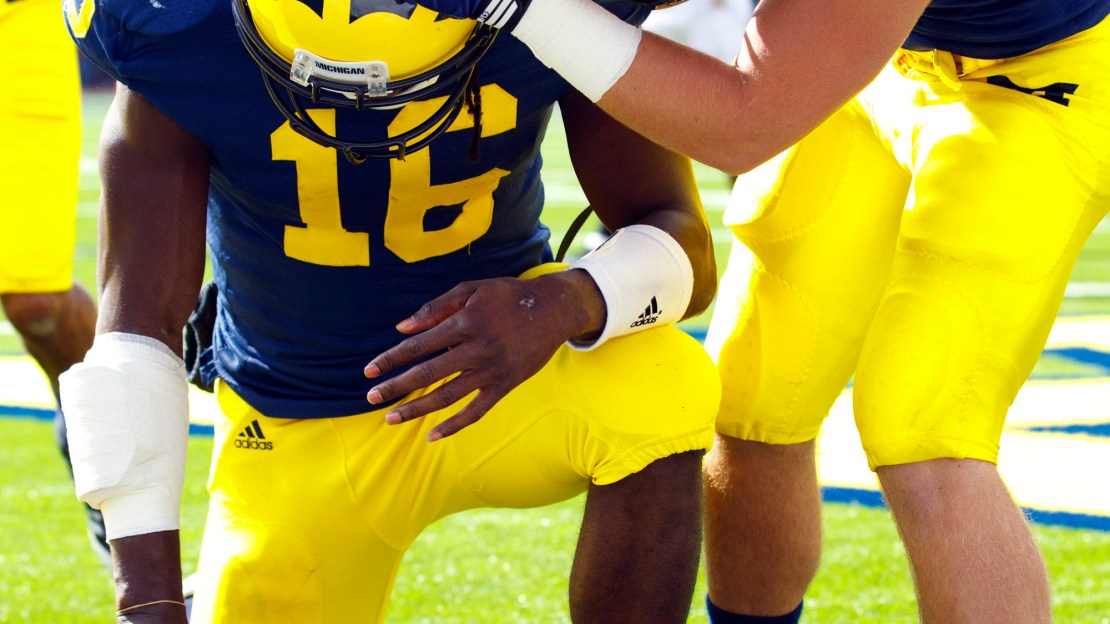 Every week during the football season, Brent Yarina posts his latest Big Ten Power Rankings. Week 5 marked the opening of Big Ten play, and Illinois, Michigan and Wisconsin all remained undefeated. As for the power rankings, they are not meant to mimic the Big Ten standings. What fun would that be? They aren?t scientific, either. They?re simply Brent?s thoughts on where each Big Ten team stands after its latest game and entering its next contest. Agree? Disagree? Tweet @BTNBrentYarina.

1. Wisconsin (5-0) - The Badgers are one of the last teams that need a bye, but that's just what they'll get after throttling previously unbeaten and then-No. 8 Nebraska on Saturday night. Against its stoutest opponent thus far, Wisconsin's offense was as efficient as ever, totaling 486 total yards and 48 points, but it was the defense that made the victory all the more impressive. Wisconsin picked off three passes and held Nebraska's prolific unit to 17 points – 25.8 under its previous season average.
Last week: No. 1
Next game: Bye

2. Michigan (5-0) - At some point, you have to ignore recent history and give the Wolverines the benefit of the doubt. The way Michigan's defense is playing and the way the offense is operating in the red zone, the Wolverines have the attributes of a team that's here for the long haul. They haven't played a game away from Michigan Stadium, admittedly, but Michigan has been the Big Ten's most impressive team through the first five weeks – after Wisconsin, of course.
Last week: No. 4
Next game: at Northwestern

3. Michigan State (4-1) - Aside from B.J. Cunningham, the Spartans don't know what they're going to get from their offense on any give Saturday. It might not matter, though, if Michigan State's defense continues to control opponents. Saturday's demolition of Ohio State, highlighted by nine sacks and just 35 rushing yards on 39 carries, was the Big Ten's most impressive defensive performance of the season. The Spartans rank in the top of seven in seven major defensive categories, including No. 1 in yards allowed per game (173.4).
Last week: No. 5
Next game: Bye

T-4. Illinois (5-0) - The last two weeks have been far from pretty, but good teams find a way to win close games, something previous Illini squads haven't done. Nathan Scheelhaase had a career day in Illinois' latest win over rival Northwestern, throwing for a career-high 391 yards and totaling four touchdowns. The previously stout defense, however, showed its first signs of weakness, allowing a season-high 35 points – 22 more than it season average entering the game.
Last week: No. 3
Next game: at Indiana

T-4. Nebraska (4-1) - Wisconsin is loaded and it's never easy playing a night game at Camp Randall Stadium, so it's tough to say this is who the Huskers are when they play elite competition. That said, Taylor Martinez was exposed as a one-threat quarterback, what with three interceptions and yet another performance of completing 50 percent of his passes. Nebraska won't come close to its goals this season if Martinez can't become a threat in the passing game, or at the very least become more accurate. Without the threat of the pass, the Huskers running game will pay the price.
Last week: No. 2
Next game: vs. Ohio State

6. Iowa (3-1) - Fresh off a bye week, the Hawkeyes will test their new wide-open offense against a Penn State defense that ranks 16th among FBS teams in passing yards allowed (777). James Vandenberg and the Hawkeyes, however, have the weapons to give the Nittany Lions their biggest challenge to date. It should be an entertaining matchup.
Last week: No. 6
Next game: at Penn State

7. Penn State (4-1) - It'd be nice if Penn State settled on a quarterback – Matt McGloin, anyone? – so the offense can find some kind of rhythm. One thing's clear: Derek Moye, one of the Big Ten's elite wide receivers, is at his best when McGloin is under center. So why not give McGloin the starting gig – at least for one game? While the offense has struggled, Devon Still and the defense have been terrific and could be the Big Ten's most underrated unit. Other than its game against loaded Alabama, the Nittany Lions have yet to allow more than 10 points in any game.
Last week: No. 8
Next game: vs. Iowa

8. Northwestern (2-2) - Dan Persa dazzled in his season debut, throwing four touchdown passes and completing 10 of 14 passes, but he took himself out of the game late with an injury. If it's serious, Northwestern is in trouble, as Persa is one of the nation's most valuable players to his team. If it's not, the senior might need to change his style so he can stay on the field. Lost in the defeat at Illinois was the team's run defense, which limited Illinois' team running attack to 82 yards on 38 carries (2.15 yards per carry).
Last week: No. 9
Next game: vs. Michigan

9. Ohio State (3-2) - The Buckeyes still have a defense that can win games by itself, but their offense has to help out a little. Ohio State has gone for 13 total points and 387 total yards in its two losses, the only two really good opponents its played (Miami, Michigan State). The good news: Boom Herron, DeVier Posey and Mike Adams all return from their five-game suspension Saturday at Nebraska. Those additions can do nothing but help the struggling Buckeyes.
Last week: No. 8
Next game: at Nebraska

10. Purdue (2-2) - So much for the improved Purdue running game. The Boilermakers, who led the Big Ten in rushing through the first three weeks, mustered only 84 rushing yards on 27 attempts (3.1 yards per carry) Saturday against Notre Dame's solid run defense. The early deficit didn't help matters, of course, but the Purdue offense struggled from the beginning and never found its footing.
Last week: No. 10
Next game: vs. Minnesota

11. Indiana (1-4) - While the Hoosiers lost again Saturday, the defense provided a slight positive to take from the latest defeat. Indiana allowed just 16 points, the fewest it has given up in a game since beating Illinois 27-14 on Oct. 10, 2009. The Hoosiers can't get too excited about the defense, though, as it was a bend-but-don't-break approach that allowed 464 total yards and was helped out by a couple of timely turnovers inside their own territory.
Last week: No. 12
Next game: vs. Illinois

12. Minnesota (1-4) - No Big Ten team has been less competitive this season than the Gophers, who have been outscored 165-91 following Saturday's 58-0 disappointing defeat at Michigan. The loss to the Wolverines was extremely troubling because it almost looked as though the Gophers didn't belong on the same field. Jerry Kill and company have a lot of work to do, needless to say, and a healthy MarQueis Gray would be a plus.
Last week: No. 11
Next game: at Purdue