Best of the Best: Week 5 Recap 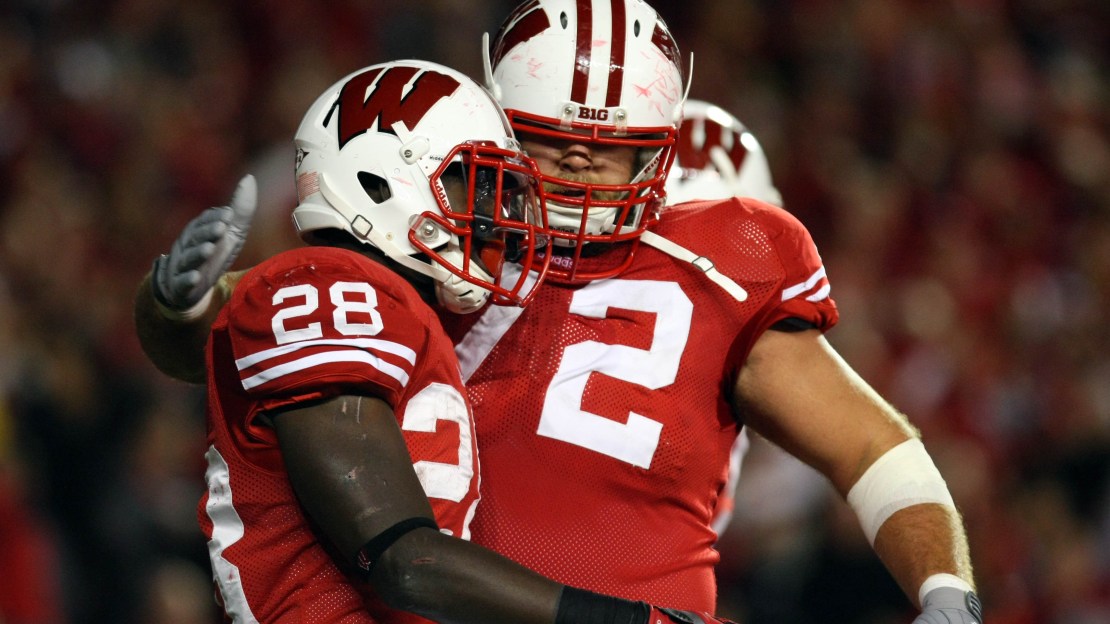 Every week during the fall, BTN.com web editor and blogger Brent Yarina recaps the week that was in Big Ten football. Each recap includes Brent?s superlative winners and the best stats, quotes and tweets, among other things, from around the Big Ten that particular week. Have a worthy stat, quote or tweet that you think should make the recap? Tweet it to @BTNBrentYarina. Watch our interview with former Michigan quarterback John Navarre now and check out Brent's Week 5 Recap in this post.

Game of the Week: Illinois 38, Northwestern 35 – Dan Persa finally returned, and while an injury ultimately led to him taking himself out of the game late, it was a great battle between the Wildcat quarterback and Nathan Scheelhaase. The two talents combined for seven passing scores and just one pick. Scheelhaase, had the last laugh, though, scoring on a one-yard run in the final seconds to complete Illinois' comeback victory. The sophomore threw for a career-high 391 yards and helped the Illini score 21 fourth-quarter points to erase a 28-17 deficit.

Co-Players of the Week: Montee Ball, Wisconsin – For all the scoring Ball has done this season, he hasn't been picking up yards at a Ball-like pace. That all changed Saturday night, when the Badger back torched Nebraska for a season-high 151 rushing yards, to go along with four touchdowns, his second four-score day of the season. Ball received his heaviest workload of the season, with 30 carries, due in part to James White's rough performance (11 car., 26 yards). Ball was strong all night, scoring a touchdown in every quarter.

A.J. Jenkins, Illinois – Jenkins had a record-setting performance Saturday, grabbing 12 passes for a school-record 268 yards and three scores in Illinois' comeback win over Northwestern. The Illini senior had 108 more receiving yards than the Wildcats, and he scored on plays of 14, 33 and 50. In other words, he lived up to his quote earlier this season about being the Big Ten's best receiver.

Team of the Week: Wisconsin – People dogged Wisconsin's schedule the whole nonconference season – heck, it's almost becoming an annual tradition. But the Badgers proved they are more than legit in thrashing No. 8 Nebraska, 48-17, in the Huskers' fist Big Ten game. Since losing last October at Michigan State, all the Badgers seem to do is destroy every opponent put in front of them, aside from the Rose Bowl. Through the first five games this season, Wisconsin has won by an average of 34.6 points per game. Consider this: Montee Ball has outscored Badger opponents, 84-51. So yes, this team is pretty good.

Impression of the Week: The Badgers are worthy of their ranking. Many people already thought this entering Saturday night's tussle with No. 8 Nebraska, but following the 48-17 thrashing, there should be no debate. While Illinois and Michigan are undefeated and Michigan State has been awfully impressive in its wins, the Badgers should be the clear favorite to win the Big Ten. Things can change from week to week, no doubt, but there seems to be a huge gap between the Badgers and their closest competitors. It's almost to the point where it looks like it will take an opponent's best performance to even stay in a game against Wisconsin.

Impression of the Week II: Michigan State's defense lives up to the stats. No, Ohio State isn't a juggernaut – just like three of the Spartans' previous four foes. Still, Michigan State proved its claim as the nation's top statistical defense by thoroughly dominating the Buckeyes, to the tune of nine sacks and 178 total yards, including 35 on the ground on 39 totes (0.9 yards per carry). Michigan State has playmakers in the secondary and a defensive line that is blowing up the line scrimmage, so it will be a treat to watch it go up against Wisconsin's prolific offense Oct. 22.

Impression of the Week III: It was quite the day for Big Ten wide receivers. Just about everywhere you looked, it seemed, someone was busting out with a huge game through the air. There was A.J. Jenkins' ridiculous record-breaking day (12 rec., 268 yards, 3 TDs), Jeremy Ebert's efficient day (5 rec., 76 yards, 3 TDs) and … you know what, just read about all the big receiving days in this week's "Marines: Leaders of the Week." Who knows if it's the transition from a run-first league to a pass-first league, or if it's poor defense, or maybe a little bit of both. We should be able to answer that question in a few more weeks.

In Minnesota's loss at Michigan, Max Shortell became the first true freshman to start a game at Minnesota since 1984.

Denard Robinson completed his first 11 passes against the Gophers, matching his season-high for completions in a game, which he set against Notre Dame in 26 attempts. He finished the day 15 of 19 for 160 yards and two touchdowns, to go along with 51 rushing yards and another score.

Vincent Smith's 17-yard touchdown pass to Drew Dileo marked the first time a non-QB threw a TD pass for Michigan since 2007, when Adrian Arrington hit Mario Manningham at Illinois. Speaking of Smith, he threw a touchdown pass, ran for a touchdown and caught a touchdown, becoming the first major college running back to do so since Clemson's C.J. Spiller in 2009.

With its 16-10 victory, Penn State moved to 15-0 all-time against Indiana, marking the only Big Ten series where one team has never beaten the other. The Nittany Lions haven't been pretty this season, but the defense has been consistently strong, limiting four of their five opponents to 10 or fewer points.

Indiana didn't baby Dusty Kiel in his first start, asking the quarterback to throw 45 times against Penn State. He completed only 22 of those passes, with one touchdown and one interception. Kiel's touchdown went to Ted Bolser, last year's breakout tight end who caught four passes for 46 yards – both season-highs.

Making his season debut, Northwestern's Dan Persa threw a career-high four touchdown passes in the first 37:49 before taking himself out late with an injury.

With its 10-7 win at Ohio State, Michigan State snapped a seven-game losing skid to the Buckeyes and gave Mark Dantonio his first win against the team he served as a defensive coordinator from 2001-03. The stat needs to be addressed again: Michigan State surrendered 35 rushing yards on 39 attempts.

In Wisconsin's 48-17 win over Nebraska, Montee Ball scored four touchdowns for the second time this season, giving him 14 scores on the season. Hard to imagine, but Ball has outscored Wisconsin's opponents, 84-51.

Purdue was outgained 551-276 in its home loss to Notre Dame, which compiled its third game with at least 500 yards of offense this year.

"I was just put in the right place at the right time. It was fun." – Vincent Smith, on becoming the first running back to throw for a score, run for a score and catch a score in the same game since Clemson's C.J. Spiller in 2009.

"This was a first step toward the expectations of what this program is and that's a Big Ten championship." – Brady Hoke, on Michigan's 58-0 victory over Minnesota.

"Shocked." – Pat Fitzgerald, on his team's collapse in 38-35 defeat at Illinois.

"Am I surprised (by the boos)? I used to work here. I'm just saying …" – Mark Dantonio, on the Ohio State fans booing during Michigan State's 10-7 win at Ohio Stadium.

"If there's a better player in college football right now, I'd like to see it." – Bret Bielema, on Wisconsin quarterback Russell Wilson.

"We didn't make plays. I'm embarrassed. I apologize to the fans of Nebraska." – Bo Pelini, on Nebraska's performance in the 48-17 loss at Wisconsin.

#16 Denard Robinson vs #16 Russell Wilson will be fun to watch in Indy!!! @B1GChampionship #GOBLUE

It was one thing when Russell Wilson was carving up inferior defenses before, this against Pelini's D is very impressive. He's sharp.

Just got out of meetings and turned on the game. I'm liking the score at halftime! #OnWisconsin

This summer I thought Russell Wilson was getting too much hype for a decent-to-good QB from N.C. State. Turns out, he wasn't getting enough.

9 sacks for the #Spartans … Really?! Wow

Millen seems very impressed by Worthy. If he were still #Lions GM, I bet he'd…pass on Worthy and draft Keshawn Martin.

This is Michigan's first shutout in #B1G play since 2001 against Penn State.

Vincent Smith has now thrown for, run for and caught a touchdown pass. Oh, there's still 9:38 left in the first half.

This Robinson's kids' speed is unreal in person. Gophers have no chance in space.

Just curious: If you are Michigan & you're clearly going to throttle Minny. Why would you break out any trick plays?

Wow. Forgot how fun it was to watch @persastrong. Great improv on a gutsy fourth-and-4 call. We're inching toward blowout territory.

Whew… Well on to next week… As always.. Onward and upward

However, Corso is undefeated in his Mascot picks this year, GBR!!!