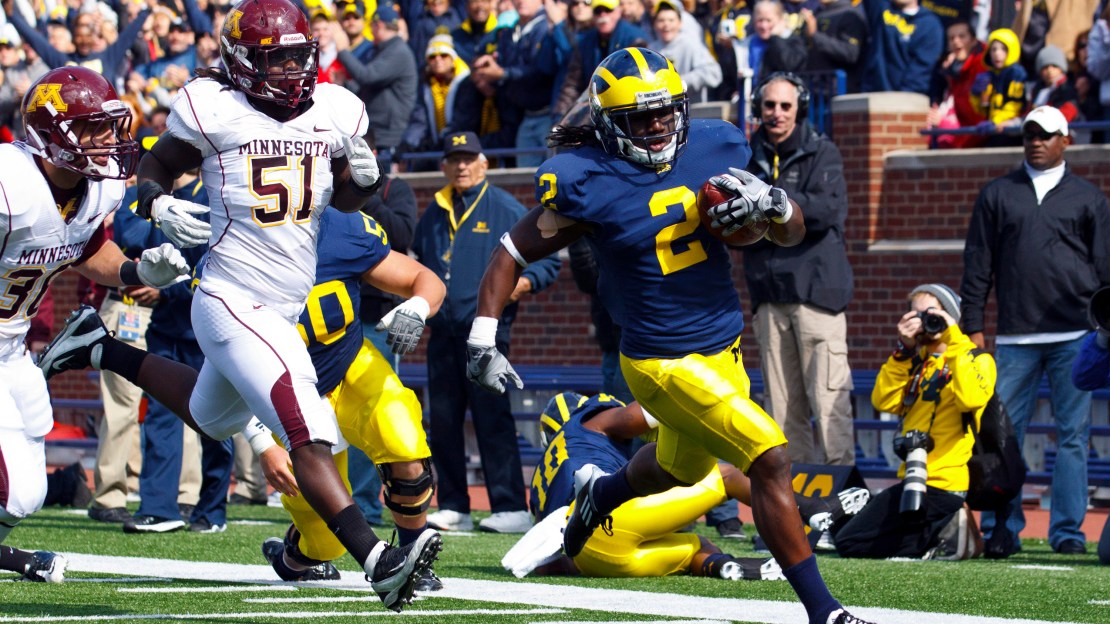 (AP) Denard Robinson threw two touchdown passes and ran for a TD to lead No. 19 Michigan in a 58-0 win over Minnesota. The Wolverines (5-0, 1-0 Big Ten) had their most lopsided win since beating Indiana by the same score in 2000. Vincent Smith scored on a run, pass and catch to help Michigan lead 38-0 at halftime. Robinson was 15 of 19 for 169 yards and didn't throw an interception for the first time since the opener and had a season-low six rushing attempts for 51 yards. He was taken out in the third quarter. Freshman Max Shortell made his first start for the Gophers (1-4, 0-0) in place of MarQueis Gray, who missed the game with an injured toe on his left foot. Read the full AP recap, check out the box score and see our Big Ten scoreboard.

FOURTH QUARTER: Michigan ran for 90 yards in the quarter, and the Wolverines finished off Minnesota 58-0. Michigan expanded its lead to 51-0 thanks to a nine-play, 58-yard drive that ended when Brendan Gibbons kicked a 39-yard field goal. Thomas Rawls' 25-yard run took the Wolverines from the 31 and across midfield to ignite the drive. Michigan made the score 58-0 when the Wolverines returned a fumble for a touchdown.

THIRD QUARTER: Michigan held Minnesota to 12 yards on the ground during the third quarter and the Wolverines now lead 48-0. Michigan made its lead 45-0 when Fitzgerald Toussaint turned a handoff into a one-yard touchdown on the last play of a four-play, 54-yard drive. The Wolverines opened up the lead, 48-0, after marching down the field for a nine-play, 38-yard drive that ended when Brendan Gibbons kicked a 32-yard field goal. Michigan's Toussaint rushed for 23 yards in the quarter to put him over 100 yards for the game. Toussaint has 108 total yards on the ground so far today. The Golden Gophers will start the fourth quarter with possession on the Wolverines' 43-yard line.

SECOND QUARTER: Twenty-four points in the second quarter has given Michigan a commanding 38-0 lead. The Wolverines made their lead 21-0 when Vincent Smith and Drew Dileo combined for a 17-yard touchdown on the last play of a nine-play, 85-yard drive. Michigan opened up the lead, 28-0, after Denard Robinson and Smith hooked up for a 28-yard touchdown to end a four-play, 69-yard drive. Fitzgerald Toussaint's 24-yard run from the 31-yard line pushed the Wolverines into enemy territory. Michigan expanded its lead to 31-0 thanks to a five-play, 29-yard drive that ended when Brendan Gibbons kicked a 25-yard field goal. The Wolverines began the drive with good field position at Minnesota's 37-yard line after Michigan returned a punt. The Wolverines made their lead 38-0 when Robinson tossed an 18-yard touchdown to Kevin Koger on the last play of a 10-play, 56-yard drive. The Golden Gophers are set to receive to start the second half.

The Wolverines expanded their lead to 14-0 thanks to a six-play, 75-yard drive that ended when Denard Robinson scrambled for a nine-yard touchdown run. Robinson's 28-yard pass to Stephen Hopkins took Michigan from the 25 and across midfield to ignite the drive. The Wolverines will start the second quarter with good field position at Minnesota's 17-yard line.

This is Michigan's first shutout in #B1G play since 2001 against Penn State.

Have yourself a day, Vincent Smith. The Wolverine has run for a TD, passed for a TD and caught a TD. It's still the first half.

Just curious: If you are Michigan & you're clearly going to throttle Minny. Why would you break out any trick plays?

Fact: The last time a non-QB threw a TD pass for Michigan, Adrian Arrington to Mario Manningham in 2007 at Illinois.

OK time to stop watching the Gophers-Michigan game. Might be a massacre

On pace for 1000 yards of offense. Minnesota… not so good.

This Robinson's kids' speed is unreal in person. Gophers have no chance in space.

#Michigan's @DenardX has attempted 394 passes and only been sacked 11 times in his career. #GoBlue #B1G