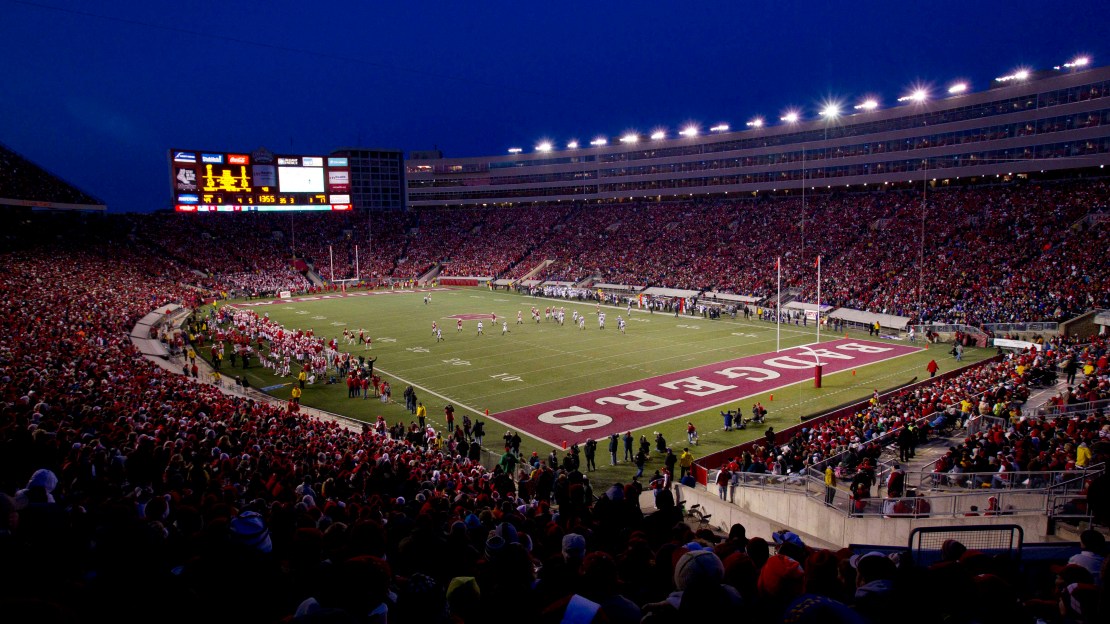 No one can say we're being eased into Big Ten play this season. Saturday's opening week features the Big Ten's first divisional games (Minnesota at Michigan; Penn State at Indiana), in addition to Wisconsin hosting Nebraska in a battle of undefeated top 10 teams under the lights at Camp Randall Stadium. Not a bad way to start things, huh? BTN has the Gophers and perfect Wolverines battling for the Little Brown Jug at noon ET. Use our GameFinder to find your BTN game and track all of the action on our Big Ten scoreboard. Read Brent Yarina's Week 5 Preview in this post.

Minnesota (1-3) vs. Michigan (4-0)
Time: noon ET
TV: BTN
About Minnesota: The Gophers are 1-3 for the first time since 2007, when they went 1-11 in Tim Brewster's first season.
About Michigan: The Wolverines have won 41 of their last 43 Big Ten openers, with the only losses during that span coming at Wisconsin.
Prediction: Michigan 47, Minnesota 20

Northwestern (2-1) vs. Illinois (4-0)
Time: noon ET
TV: ESPN2
About Northwestern: The Wildcats gave up 381 rushing yards last time out at Army, and now they face Illinois' deep running attack that has four guys who have rushed for more than 200 yards.
About Illinois: The Illini have lost 16 of their last 17 Big Ten openers, the lone win coming in 2007 at Indiana.
Prediction: Illinois 30, Northwestern 21

Penn State (3-1) vs. Indiana (1-3)
Time: noon ET
TV: ESPNU
About Penn State: The Nittany Lions are 14-0 against the Hoosiers, marking the only Big Ten matchup, not including first-year Nebraska, where one of the teams has never won.
About Indiana: The Hoosiers have scored 52 of their 110 points (47 percent) in the fourth quarter this season.
Prediction: Penn State 36, Indiana 10

Notre Dame (2-2) vs. Purdue (2-1)
Time: 8 p.m. ET
TV: ESPN
About Notre Dame: After committing five turnovers in each of their first two games, the Irish turned it over thrice two weeks ago and twice last week, so they're trending in the right direction.
About Purdue: The Boilers, fresh off a bye, have lost their last four games against Notre Dame following an open week by a combined 137-27 score. (via BoiledSports.com)
Prediction: Notre Dame 34, Purdue 23

Game of the Week: Nebraska at Wisconsin – Possibly the easiest selection of the season, Nebraska couldn't make its first foray into the Big Ten in grander fashion. No, that's not hyperbole. There isn't a more dominating Big Ten team the past year-plus than its opponent, Wisconsin. The Badgers are the reigning Big Ten co-champs, they're the Big Ten's highest-ranked team, at No. 7, and they play their home games at a stadium, Camp Randall Stadium, that is crazy every Saturday, let alone Saturday nights. Camp Randall will be electric for this game between undefeated top 10 teams.

Player of the Week: Denard Robinson, Michigan – No Golden Gopher has ever faced Robinson, the conference's leading rusher as a quarterback. That's strike one. Strike two: Minnesota has surrendered 1,114 passing yards, bad enough for 111th in FBS, meaning Robinson has the opportunity to do a lot of damage through the air on top of his seemingly inevitable strong performance on the ground. And finally, strike three: Robinson has run for 198 and 200 yards the last two weeks. All in all, it's a great matchup for Robinson.

Team of the Week: Wisconsin – Everyone keeps bashing the Badgers' supremely soft nonconference schedule, and while all the talk is fair, they've pretty much dismantled every opponent put in front of them – Rose Bowl aside – since losing at Michigan State last October. A win over No. 8 Nebraska would help quiet some of the naysayers, not to mention do a whole lot for Wisconsin's national ranking/stock.

Random thought of the Week: What will we see from Dan Persa? The Northwestern quarterback expects to make his highly anticipated season debut Saturday against rival Illinois. But will he be limited and forced to be a pocket passer? Or will he feel well enough to use his legs, improvise and keep drives alive with his dual-threat ability? Either way, it's going to be a tough first draw against a very talented Illinois defense.