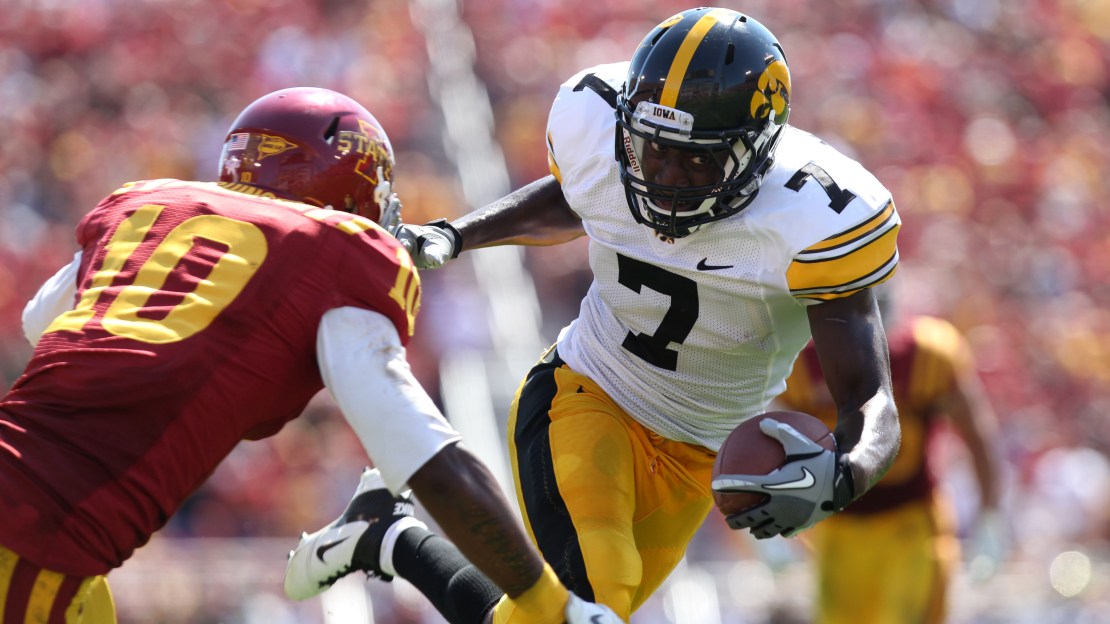 It's finally that time. Big Ten play kicks off Saturday, starting with a trio of noon ET games, including Michigan (4-0) hosting Minnesota (1-3) on BTN. Now that the full weeks of nonconference action are a thing of the past, BTN.com web editor and blogger Brent Yarina looks back at the first four weeks and offers his nonconference Big Ten honors. Watch now as "The Big Ten Pulse" also discusses nonconference awards and see all of Brent's winners in this post.

WR: Marvin McNutt, Iowa (25 rec., 413 yards, 4 TDs) – In four games, McNutt has hit the 100-yard mark three times and has a pair of two-score days. The quarterback-turned-receiver is a nightmare of a matchup for opposing secondaries, evidenced by his 6.3 receptions and 103.3 yards per game, and he's only getting better with every passing week.
Runner-up: Nick Toon, Wisconsin

RB: Montee Ball, Wisconsin (63 car., 360 yards, 9 TDs; 6 rec., 120 yards, 1 TD) – All Ball does is score touchdowns. No, that's a lie. The Badger back does it all, averaging 120 total yards per game in Wisconsin's loaded offense, but his propensity for getting in the end zone is second to none. Dating back to last year, Ball has at least two touchdowns in Wisconsin's last eight regular-season games and 25 scores in the last 10.
Runner-up: Rex Burkhead, Nebraska

TE: Jacob Pedersen, Wisconsin (11 rec., 175 yards, 4 TDs) – Pedersen sure looks like he will be the guy to continue the great tight end tradition at Wisconsin. Only a sophomore, Pedersen has found the end zone in three of the first four games, including a two-score day against Oregon State, Wisconsin's only BCS competitor so far.
Runner-up: Jake Stoneburner, Ohio State

OL: Jeff Allen, Illinois – When the Illini lost Mikel Leshoure to the NFL, many people worried about the perennially strong Illinois running game. Those worries have been squashed, both by a strong offensive line, anchored by Allen, and a deep rushing attack. Four Illini have rushed for more than 200 yards, more than any other Big Ten team, and they've combined for 10 rushing touchdowns.
Runner-up: Peter Konz, Wisconsin

K: Brett Maher, Nebraska – Maher is 8 of 9 on field goal attempts – his one miss being the controversial 48-yarder that went directly over the upright at Wyoming – and has yet to miss an extra point in 21 tries. Averaging 11.25 points per game, he's not just a chip-shot artist, either, hitting from 48 and 50 yards this season.
Runner-up: Derek Dimke, Illinois

MVP: Russell Wilson, Wisconsin
Breakout Player: James Vandenberg, Iowa; Akeem Shavers, Purdue
Freshman: Kevonte Martin-Manley, Iowa
Best Offense: Wisconsin – The Badgers can hurt you through the air (1,147 yards; 16th in FBS) or on the ground (982; 10th) better than any other Big Ten team. Need more proof? Wisconsin averages a Big Ten-best 48.5 points.
Surprise Offense: Iowa – When you think of the Hawkeye offense under Kirk Ferentz, the last thing you think is a no-huddle attack that features the ball being thrown all over the field. That's what Iowa has run the last couple of weeks, though, and it's played a big part in helping the unit score at least 30 points in its first four games for the first time since 2002.

DEFENSE
DL: Devon Still, Penn State (21 tackles, 5.5 TFL, 1 sack) – In a conference loaded with stud defensive lineman, Still has put his name atop the list early this season. The senior leads the Big Ten in tackles for loss and anchors a Penn State unit that's 10th among FBS teams in points allowed per game (12.5). Take away the Alabama loss, a 27-11 decision, and the Still-led defense surrenders 7.7 points.
Runner-up: Cameron Meredith, Nebraska

LB: Chris Borland, Wisconsin (35 tackles, 5 TFL, 1 INT) – Back from last year's shoulder issues, Borland looks as good as ever. The former Big Ten Freshman of the Year averages 8.8 tackles per game and has led the Badgers in tackles in three of their four games. He's also been blowing up the opponents' backfield, with five tackles for loss, which ranks best among Big Ten linebackers.
Runner-up: Jonathan Brown, Illinois

DB: Shaun Prater, Iowa (16 tackles, 1 INT, 2 forced fumbles) – Quarterbacks don't like challenging Prater, so his overall numbers don't jump out at you. Still, Prater has made the most of his limited opportunities, picking off a pass and returning it 89 yards for a score and forcing a pair of fumbles.
Runner-up: Trulon Henry, Illinois

P: Brett Maher, Nebraska – Yes, he kicks and he punts. He does both pretty well, too, as he's averaging 49 yards per punt, including a season-long 61-yarder. He's also booted six punts inside the opponent's 20-yard line.
Runner-up: Cody Webster, Purdue

MVP: Chris Borland, Wisconsin
Breakout Player: Jonathan Brown, Illinois; Jordan Bernstine, Iowa
Freshman: Marcus Rush, Michigan State
Best Defense: Illinois – The Illini weren't expected to be in the discussion for this honor, but through four games there hasn't been a better unit. Illinois has allowed only five touchdowns and is surrendering 13 points per game – both good enough for 12th best in FBS – and its 283.7 yards per game surrendered ranks 19th. Most telling: Illinois held then-No. 18 Arizona State to 14 points, 21.5 points below its season average.
Surprise Defense: Michigan – People knew the Michigan defense would improve in Year 1 under Greg Mattison, however no one could have predicted this fast of a turnaround. The Wolverines allow their chunks of yardage (1,404; 70th in FBS), sure, but their bend-but-don't-break approach is working. Thanks in large part to 13 turnovers, Michigan is allowing 12.8 points per game. A years ago, Michigan forced eight turnovers and allowed 23 points per game in its first four contests.