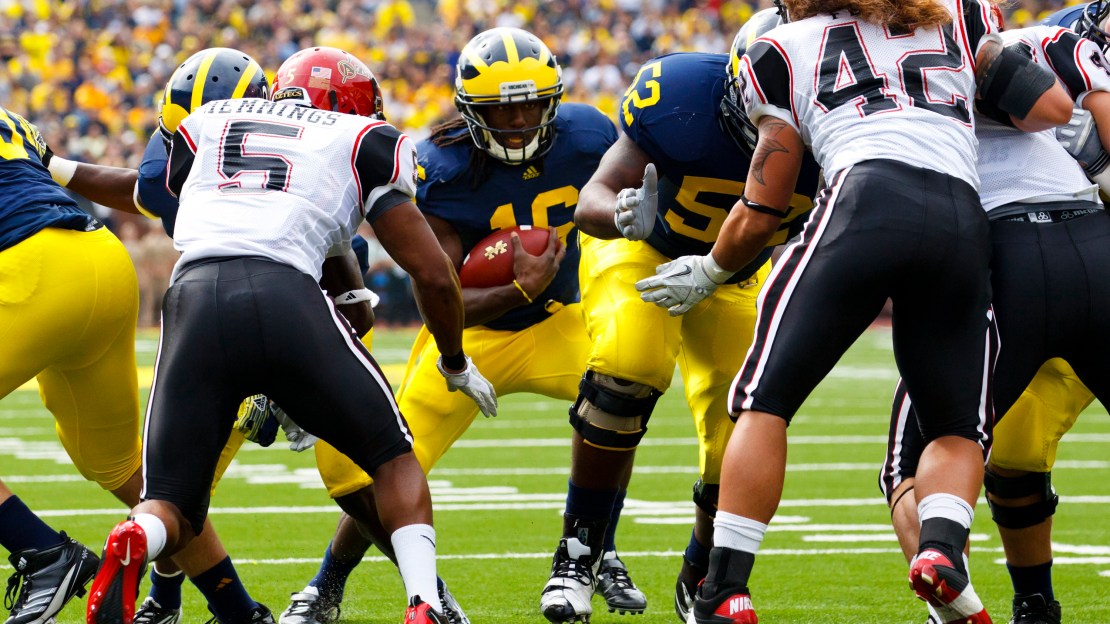 (AP) Denard Robinson ran for three scores in the first half to give No. 22 Michigan a three-touchdown lead and finished with a season-high 200 yards rushing, helping the Wolverines beat San Diego State 28-7. The Wolverines (4-0) sputtered Saturday on offense after halftime because Robinson struggled in the passing game. Michigan was fortunate Ryan Lindley couldn't hit open Aztecs. After Lindley missed a teammate on fourth down midway through the fourth quarter, Robinson's 30-yard sprint set up Vincent Smith's 7-yard run to give Michigan a 28-7 lead. Read the full AP recap, check out the box score and see our Big Ten scoreboard.

FINAL: Denard Robinson put the team on his back in No. 21 Michigan's 28-7 win over San Diego State on Saturday at Michigan Stadium, rushing for 200 rushing yards and three touchdowns. Michigan's (4-0) offense had a sloppy outing, as it turned the ball over four times. The Wolverines' offense gained 412 total yards though, and was able to score enough for the win. Home run plays keyed Michigan's scoring attack. The Wolverines burned San Diego State's (3-1) defense for five plays of more than 20 yards. With 6:40 to go in the first quarter, Robinson kept it himself for a 53-yard touchdown run, Michigan's longest play on the day. The long touchdown gave the Wolverines a 14-0 lead. The Aztecs' Ryan Lindley went 23 of 48 through the air for a total of 253 yards. Lindley tossed one touchdown and no interceptions. Colin Lockett was the player Lindley targeted most often. He caught seven passes for 71 yards and one touchdown. San Diego State racked up 376 total yards. The Aztecs' rushing attack contributed 123 yards on 29 carries in addition to Lindley's passing effort. THIRD QUARTER: Vincent Smith did his best to lead Michigan in the quarter. He ran for two yards and caught one pass for 32 yards and the Wolverines now lead 21-7. San Diego State closed the gap to 21-7 when Ryan Lindley and Colin Lockett combined for a 16 yard touchdown to put a bow on a 38-yard drive. The Aztecs started in good field position at Michigan's 38-yard line when San Diego State recovered a fumble. Five of the Aztecs' six plays during that series were passing plays. The Wolverines have the ball on their 18-yard line to begin the fourth quarter.

SECOND QUARTER: Michigan ran for 82 yards in the quarter, and the Wolverines now lead 21-0. Michigan opened up the lead, 21-0, after marching down the field for a 12-play, 81-yard drive that ended when Denard Robinson turned a quarterback sneak into a one-yard touchdown run. The Wolverines threw just two times on that possession. Michigan's Robinson reached the 100-yard rushing mark for the game thanks to 54 in the quarter, and currently sits with 140 yards in all. The Wolverines will receive to start the second half.

FIRST QUARTER: No. 21 Michigan ran for 124 yards in the quarter, and the Wolverines lead 14-0 at the end of the first quarter. Michigan got on the scoreboard first, rattling off a six-play, 61-yard drive that ended in a score when Denard Robinson took a quarterback draw all the way for a five-yard touchdown run, putting the Wolverines on top, 7-0. Michigan threw just one time on that possession. The Wolverines opened up the lead, 14-0, after marching down the field for a three-play, 61-yard drive that ended when Robinson kept it himself for a 53-yard touchdown run. Michigan has possession on its 19-yard line to start the second quarter.

Lindley was billed as an NFL-caliber QB. I hope he likes Canada. #umsdsu

The Michigan defense has given up only 3 points in the last 6+ quarters. That's…surprising.

Michigan up 21-0 on San Diego St. team that has scored 21 or more in 17 consecutive games. Safe to say Michigan's D is much improved.

#Michigan had not scored in the 1st quarter of its previous 3 games to Eastern Michigan, Notre Dame and Western Michigan

Denard with three first half rushing TDs. Is Mr. 8 TDs @HowardGriffith getting worried at BTN studios?

@freepwolverines t Not yet! Lol