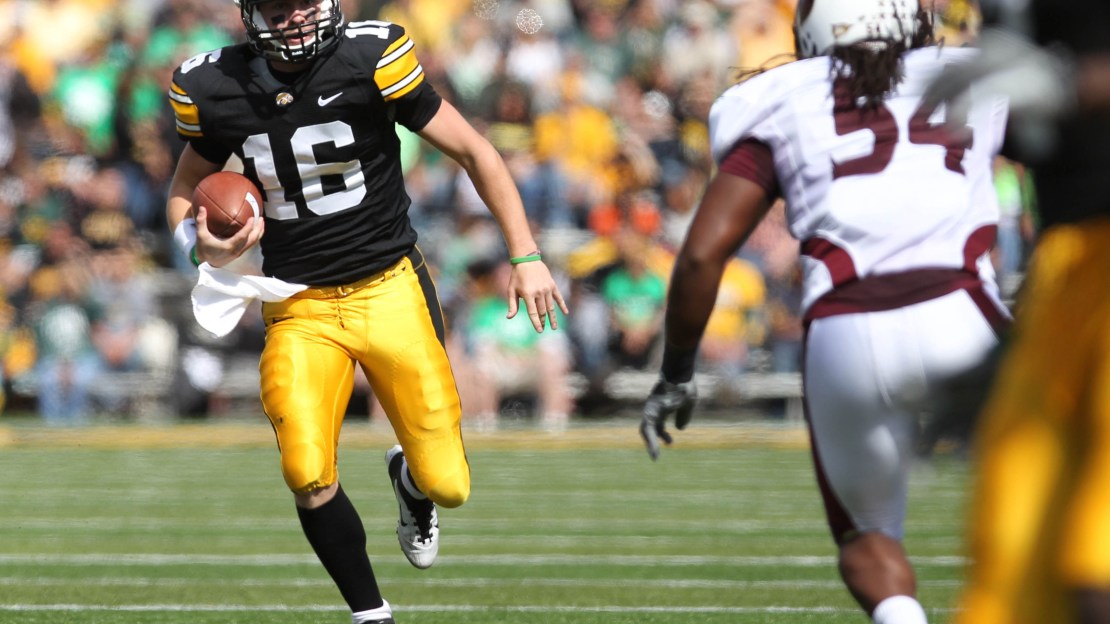 (AP) James Vandenberg threw for 270 yards and three touchdowns and Iowa cruised past Louisiana-Monroe 45-17 on Saturday. Marcus Coker added 113 yards rushing and a pair of touchdowns for the Hawkeyes (3-1), who raced out to a 28-3 halftime lead on the strength of a revitalized passing attack in their final tuneup before the start of Big Ten play. Vandenberg threw for 198 yards in the opening half. His 1-yard TD plunge opened the scoring, and Vandenberg found Marvin McNutt for TD pass of 13 and 17 yards to put the Hawkeyes up by 25 late in the second quarter. Read the full AP recap, check out the box score and see our Big Ten scoreboard.

FINAL: James Vandenberg picked apart Louisiana-Monroe's defense to the tune of 273 passing yards and three touchdowns, helping Iowa to a 45-17 win on Saturday at Kinnick Stadium. Iowa (3-1) operated its air game to perfection in dismantling Louisiana-Monroe's (1-3) defense. The Hawkeyes' air attack couldn't be contained, as they torched the Warhawks for 276 yards and three touchdowns. Vandenberg completed 21 of 32 passes for Iowa. The Hawkeyes' explosive offense used big plays to take down Louisiana-Monroe. Iowa had five plays of 20 yards or more on its way to victory. With 3:27 to go in the first quarter, Marcus Coker ran 26 yards, the Hawkeyes' biggest gain of the game. The big play set up an 11-play drive that gave Iowa a 14-3 lead after Vandenberg and Marvin McNutt combined for a 13-yard touchdown. Kolton Browning threw for 141 yards while going 17-28 for the Warhawks. He threw no interceptions. Browning also ran for 30 yards on eight attempts. Brent Leonard was the player Browning targeted most often. He hauled in eight catches for 73 yards. Louisiana-Monroe racked up 364 total yards, including 292 yards passing while completing 29 of 45 attempts. The Warhawks rushed 29 times for just 72 yards.

FOURTH QUARTER: Iowa held Louisiana-Monroe to 13 yards on the ground during the fourth quarter and the Hawkeyes kept the game out of reach for a 45-17 victory over the Warhawks. Iowa closed the game on a 10-point run. The Hawkeyes expanded their lead to 45-17 thanks to a 12-play, 53-yard drive that ended when Mike Meyer kicked a 22-yard field goal. Iowa's drive stalled at Louisiana-Monroe's four-yard line and the Hawkeyes settled for a field goal. Marvin McNutt clinched a 100-yard receiving game with seven yards in the quarter, part of a seven-catch, 100-yard day for Iowa.

THIRD QUARTER: At the end of the third quarter, Iowa holds a commanding 42-17 lead over Louisiana-Monroe. The Warhawks made the score 28-10 after Kolton Browning took a quarterback draw all the way for a four-yard touchdown run to finish off a 71-yard drive. The Hawkeyes opened up the lead, 35-10, after Marcus Coker ran two yards to paydirt to end a six-play, 60-yard drive. Iowa threw just one time during that march downfield. Louisiana-Monroe closed the gap to 35-17 when Tavarese Maye pounded in a one-yard touchdown run to cap off a 76-yard drive. The Hawkeyes expanded their lead to 42-17 thanks to a three-play, 41-yard drive that ended when James Vandenberg found Keenan Davis open for a 23-yard touchdown pass. Marcus Collins' big kickoff return put Iowa at the Louisiana-Monroe 41-yard line to open the drive. The Hawkeyes' Coker topped 100 yards rushing for the game in the quarter, and has plenty of time to add to his 107 total yards on the ground. Iowa's Vandenberg passed for 52 yards in the quarter to put him over 200 yards for the game. Vandenberg has 252 yards through the air so far today. The Warhawks will start the fourth quarter with possession on their 24-yard line.

SECOND QUARTER: Iowa is set to cruise control as the Hawkeyes lead by a score of 28-3 at the end of the second quarter. Iowa opened up the lead, 21-3, after marching down the field for a six-play, 29-yard drive that ended when Marcus Coker ran three yards to paydirt. Micah Hyde's punt return put the Hawkeyes at the Louisiana-Monroe 29-yard line to open the drive. Iowa expanded its lead to 28-3 thanks to an eight-play, 80-yard drive that ended when James Vandenberg tossed a 17-yard touchdown to Marvin McNutt. The Hawkeyes ran just two times during that march downfield. Iowa's Vandenberg reached the 200-yard passing mark for the game thanks to 109 in the quarter, and currently sits with 200 yards in all. Louisiana-Monroe will receive to start the second half.

FIRST QUARTER: Iowa's James Vandenberg starred in the first quarter. The Hawkeyes lead 14-3 at the end of the first quarter. Iowa aired it out in the quarter, finishing with 91 passing yards. The Hawkeyes scored when Vandenberg turned a quarterback sneak into a one-yard touchdown run to cap off a nine-play, 74-yard drive, giving Iowa the game's first lead, 7-0. The Hawkeyes' took Iowa from its 60-yard line across midfield and ignited the drive. Louisiana-Monroe made the score 7-3 after Justin Manton kicked a 43-yard field goal to finish off a 57-yard drive. The Hawkeyes made their lead 14-3 when Vandenberg threw a 13-yard touchdown pass to Marvin McNutt on the last play of an eight-play, 60-yard drive. Iowa has possession on its 38-yard line to start the second quarter.

Good day to be a Hawkeye