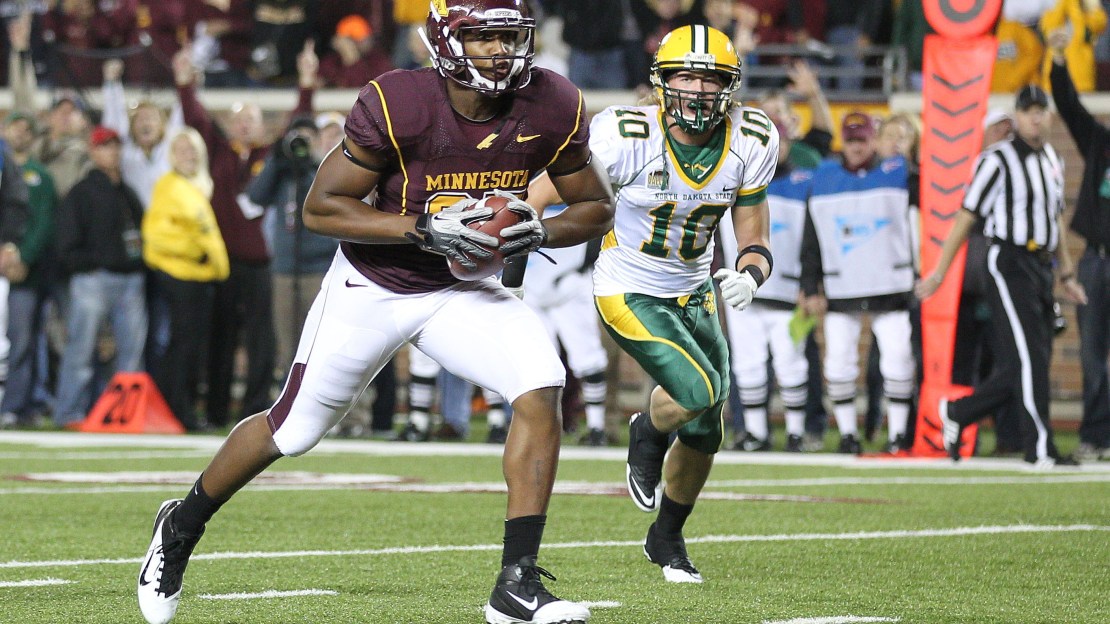 (AP) Marcus Williams had two defensive touchdowns for North Dakota State on Saturday to help the Bison pull off another FCS team upset of Minnesota, 37-24. Williams, a sophomore cornerback who played at Hopkins High School in the Twin Cities, returned an interception of Max Shortell's late heave 40 yards for a touchdown to seal the game. On the final play of the first half, teammate Colten Heagle picked off MarQueis Gray's risky pass and tossed the ball back to Williams as he was taken down. Williams raced 52 more yards to put the Bison (3-0) ahead 28-14 at the break. Donnell Kirkwood rushed 10 times for 70 yards and two touchdowns for the Gophers (1-3). Read the full AP recap, check out the box score and see our Big Ten scoreboard.

FINAL: D.J. McNorton and Brock Jensen teamed up to lead North Dakota State to a 37-24 victory over Minnesota on Saturday at TCF Bank Stadium. Jensen passed for 196 yards, while McNorton ran for 91 yards and one touchdown. North Dakota State's (3-0) offense dominated, ripping off huge chunks of yardage. Minnesota's (1-3) defense gave up four plays of at least 20 yards. With 2:02 to go in the second quarter, McNorton ran 58 yards, the Bison's biggest gain of the game. The big gainer was part of a seven-play drive capped off when McNorton ran two yards to paydirt. That gave North Dakota State a 21-14 lead. Donnell Kirkwood did his best to carry the Golden Gophers' offense, turning 10 carries into 71 rushing yards and two touchdowns. Minnesota's MarQueis Gray passed for 73 yards, completing six of 13 throws. He threw one touchdown and one interception. Gray was also a threat on the ground, as he rushed for 22 yards on 13 attempts. The Golden Gophers' offense finished the game having gained 290 yards, including 124 passing yards on nine completions. Minnesota's ground game balanced its offense, bringing 166 yards on 41 attempts. The Bison's offense finished the game having gained 340 yards. In addition to Jensen's efforts through the air, North Dakota State also rushed 28 times for 144 yards.

FOURTH QUARTER: North Dakota State's Ryan Smith starred in the fourth quarter. He caught two passes for 38 yards and the Bison finished off Minnesota 37-24. The Golden Gophers capped off a 46-yard drive when MarQueis Gray found Eric Lair open for a 20-yard touchdown pass to make the score 31-24. Minnesota's punt return put the Golden Gophers at North Dakota State's 46-yard line to open the drive. The Bison made the score 37-24 when Marcus Williams intercepted of Max Shortell's pass and returned it for a touchdown.

THIRD QUARTER: North Dakota State's Brock Jensen starred in the third quarter. He threw for 71 yards and ran for one yards and the margin is still 14, as the Bison lead 31-17. North Dakota State expanded its lead to 31-14 thanks to a 12-play, 55-yard drive that ended when Ryan Jastram drilled a 49-yard field goal. Minnesota capped a 53-yard drive when Chris Hawthorne kicked a 36-yard field goal to make the score 31-17. The Bison have the ball on their 14-yard line to begin the fourth quarter.

SECOND QUARTER: North Dakota State picked up 101 yards in the ground game during the second quarter, and the Bison have taken the lead 28-14. Minnesota has given up the last 14 points. North Dakota State tied the score at seven apiece after Brock Jensen kept it himself for a one-yard touchdown run to finish off an 11-play, 65-yard drive. The Bison went to the air just three times during that march downfield. North Dakota State broke the 7-7 tie when Sam Ojuri ran three yards to paydirt to polish off a seven-play, 83-yard scoring drive. The Golden Gophers tied the game at 14 after Donnell Kirkwood pounded in a 30-yard touchdown run to end a 10-play, 95-yard drive. The ground game accounted for every yard on that drive. A five-play, 71-yard scoring drive by the Bison snapped the 14-14 deadlock, as D.J. McNorton ran two yards to paydirt. The key play on North Dakota State's drive was McNorton's 58-yard run. The Bison made the score 28-14 when North Dakota State recovered a fumble in the endzone. The Bison will get the ball to start the second half.

FIRST QUARTER: Minnesota's Donnell Kirkwood led the offense in the first quarter. He ran for 17 yards and one touchdown and the Golden Gophers lead 7-0. Minnesota struck first when Kirkwood ran four yards to paydirt for a 7-0 lead, the final play of a 13-play, 68-yard drive. North Dakota State will start the second quarter with good field position on the Golden Gophers' one-yard line.