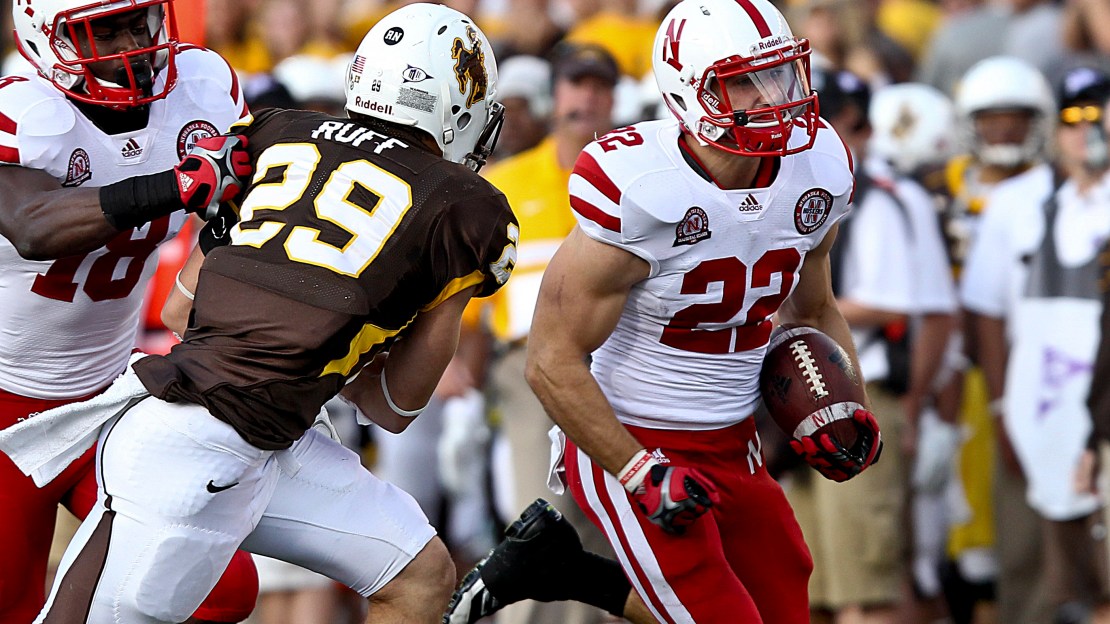 (AP) Rex Burkhead rushed for two touchdowns and a career-high 170 yards, Taylor Martinez threw for 157 yards and another score and No. 9 Nebraska beat Wyoming 38-14 on Saturday night. The Huskers (4-0) rolled up 490 yards total offense, including 333 on the ground, in their first road game of the season and last game before their highly anticipated Big Ten opener at Wisconsin next weekend. Burkhead had TD runs of 45 and 16 yards, piling up the yards on just 15 carries.  The Huskers scored on their first two possessions of the second half and opened a 31-7 lead on Burkhead's 16-yard scamper, a 20-yard field goal by Brett Mahar and an 8-yard TD pass from Martinez to Kenny Bell. Read the full AP recap, check out the box score and see our Big Ten scoreboard.

Check our our quarter-by-quarter recap, powered by Narrative Science:

FINAL: Rex Burkhead broke out against Wyoming, piling up 170 rushing yards and scoring two touchdowns to lead No. 9 Nebraska to a 38-14 victory on Saturday at Jonah Field at War Memorial Stadium. Nebraska's (4-0) offense dominated, ripping off huge chunks of yardage. Wyoming's (3-1) defense gave up six plays of at least 20 yards. With 8:38 to go in the first quarter, Burkhead ran 45 yards to paydirt, the Cornhuskers' longest play on the day. The long touchdown gave Nebraska a 7-0 lead. Brett Smith threw for 166 yards while completing 17 of 33 passes for the Cowboys. Smith tossed two touchdowns and one interception. Wyoming's offense finished the game having gained 310 yards, including 168 passing yards on 18 completions. Rushing was a key ingredient in the Cowboys' offensive mix, bringing them 142 yards on 31 carries. The Cornhuskers' Taylor Martinez passed for 155 yards, completing 12 of 21 throws. He threw one touchdown and no interceptions. Martinez was also a threat on the ground, as he rushed for 44 yards on 12 attempts. Nebraska racked up 494 total yards. Along with Martinez's stats in the passing game, the Cornhuskers also added 339 yards rushing on 49 attempts.

FOURTH QUARTER: Nebraska gained 133 yards on the ground in the fourth, and the Cornhuskers kept the game out of reach for a 38-14 victory over Wyoming. Nebraska opened up the lead, 31-7, after Taylor Martinez threw an eight-yard touchdown pass to Kenny Bell to end a 10-play, 80-yard drive. The Cowboys closed the gap to 31-14 when Brett Smith found Robert Herron open for a 10-yard touchdown pass to clinch an 80-yard drive. The Cornhuskers opened up the lead, 38-14, after marching down the field for an 11-play, 80-yard drive that ended when Braylon Heard pounded in a one-yard touchdown run.

THIRD QUARTER: Thanks to a mean rushing attack, Nebraska now leads 24-7. the Cornhuskers rushed for 93 yards in the quarter. Nebraska's defense shut down Wyoming's aerial attack in the quarter, holding the Cowboys to 10 passing yards. Wyoming has given up the last 10 points. The Cornhuskers opened up the lead, 21-7, after Rex Burkhead ran 16 yards to paydirt to end a three-play, 56-yard drive. Nebraska's Burkhead hit 150 yards rushing for the game in the quarter, part of his 159-yard rushing performance thus far. The Cornhuskers have possession on the Cowboys' 29-yard line to start the fourth quarter.

SECOND QUARTER: Nebraska's Taylor Martinez led the offense in the second quarter. He threw for 70 yards and ran for 24 yards and one touchdown and the margin is still seven, as the Cornhuskers lead 14-7. Nebraska expanded its lead to 14-0 thanks to an eight-play, 80-yard drive that ended when Martinez took a quarterback draw all the way for an eight-yard touchdown run. Wyoming polished off an 80-yard drive when Brett Smith and Mazi Ogbonna combined for a 48 yards touchdown to make the score 14-7. The Cowboys passed on five of seven plays on that possession, almost ignoring the running game completely. The Cornhuskers will start the second half with the ball.

FIRST QUARTER: No. 9 Nebraska held Wyoming to 42 total yards during the first quarter and the Cornhuskers lead 7-0 at the end of the first quarter. Nebraska held the Cowboys to 24 yards on the ground during the quarter. The Cornhuskers scored when Rex Burkhead turned a handoff into a 45-yard touchdown run, giving Nebraska the game's first lead, 7-0. The Cornhuskers' punt return put Nebraska at the Wyoming 45-yard line to open the drive. Wyoming has the ball on its 33-yard line to begin the second quarter.

This just in: Taylor Martinez struggles when throwing the ball.

Brett Maher kicking and punting the ball tonight like it's filled with helium. Safety time?

Wyoming students chant "overrated" as the #Huskers take the field.

Jared Crick is out on the field right now walking around with the rest of the guys. Nobody is in pads yet though. #Huskers