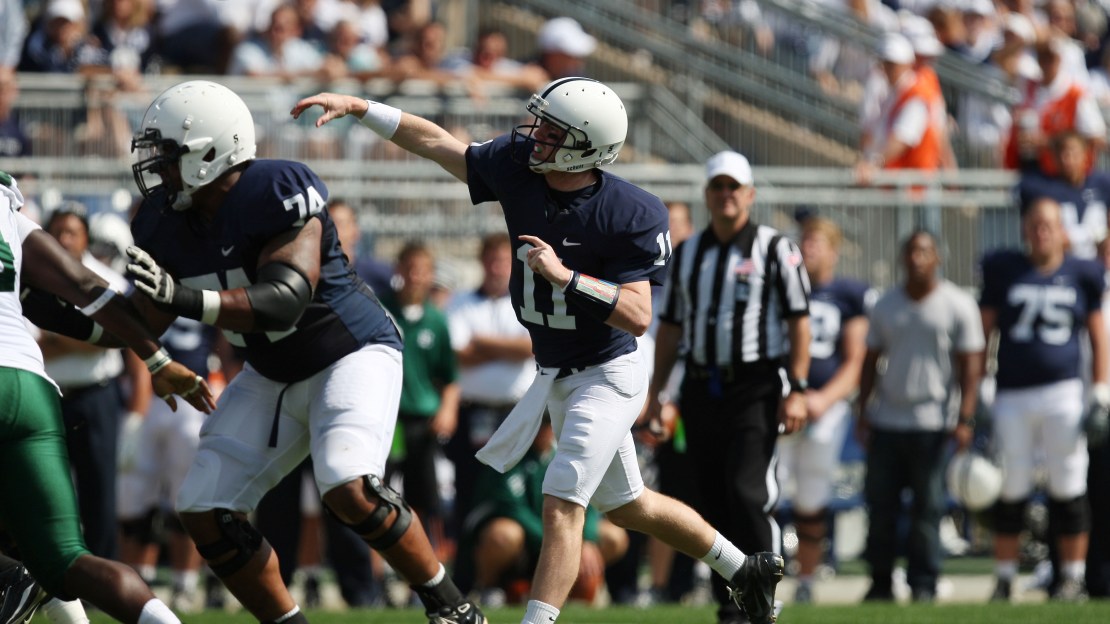 (AP) Matt McGloin threw for three touchdowns and Penn State welcomed coach Joe Paterno back to the sideline with a 34-6 win Saturday over Eastern Michigan. Penn State (3-1) held the Eagles (2-2) to 68 on the ground – 221 below its season average – and forced three first-half turnovers. Nick Sukay's interception late in the half set up the second of McGloin's scoring strikes, a 5-yarder to receiver Derek Moye for a 17-0 lead. It surely pleased the 84-year-old Paterno, who paced the sideline in the first half for the first time this season before returning to the press box after halftime with his team up comfortably. Read the full AP recap, check out the box score and see our Big Ten scoreboard.

FINAL: Penn State took home a 34-6 win over Eastern Michigan thanks to the chemistry between Matthew McGloin and Derek Moye, who led the passing attack for Penn State (3-1) on Saturday at Beaver Stadium. Moye made himself available to McGloin for six receptions and 65 yards. The Nittany Lions' passing game looked flawless, despite the efforts of Eastern Michigan's (2-2) secondary. Penn State's air attack couldn't be contained, as it torched the Eagles for 363 yards and four touchdowns. The Nittany Lions' offense dominated, ripping off huge chunks of yardage. Eastern Michigan's defense gave up four plays of at least 20 yards. With 14:15 to go in the third quarter, Rob Bolden threw a 71-yard touchdown pass to Devon Smith, Penn State's longest play on the day. The touchdown gave the Nittany Lions a 24-0 lead. Penn State's McGloin went 14 of 17 through the air for a total of 219 yards. McGloin tossed three touchdowns and no interceptions. The Eagles' Alex Gillett passed for 202 yards, completing 18 of 31 throws. He threw one interception. Gillett was also a threat on the ground, as he rushed for 22 yards on 15 attempts. Eastern Michigan's offense finished the game having gained 270 yards. In addition to Gillett's efforts through the air, the Eagles could only muster 68 yards rushing on 43 attempts.

FOURTH QUARTER: Penn State sniffed out Eastern Michigan's rushing attack in the fourth quarter, holding the Eagles to 18 rush yards and the Nittany Lions finished off Eastern Michigan 34-6. The Eagles made the score 31-3 after Kody Fulkerson made a 21-yard field goal to finish off a 17-yard drive. Eastern Michigan began the drive with good field position at Penn State's 21-yard line after Brad Ohrman intercepted a Rob Bolden pass. The Nittany Lions opened up the lead, 34-3, after marching down the field for an eight-play, 50-yard drive that ended when Sam Ficken drilled a 43-yard field goal. The Eagles closed the gap to 34-6 when Fulkerson kicked a 22-yard field goal to cap off a 72-yard drive. Despite driving to Penn State's four-yard line, Eastern Michigan had to settle for a field goal. The Eagles' Alex Gillett reached the 200-yard passing mark for the game thanks to 72 in the quarter, and ended his day with 202 yards in all.

THIRD QUARTER: Penn State's front seven stepped up in the third quarter, allowing Eastern Michigan to gain just 10 rushing yards, and the Nittany Lions now lead 31-0. Penn State opened up the lead, 24-0, after Rob Bolden found Devon Smith open for a 71-yard touchdown pass to end a three-play, 76-yard drive. The Nittany Lions added to their advantage when Matthew McGloin tossed a 20-yard touchdown to Derek Moye, the final play on a nine-play, 87-yard drive to give Penn State the lead, 31-0. The Nittany Lions ran just two times on that drive. Penn State's Smith hauled in two catches for 86 yards in the quarter to put him over 100 yards receiving for the game. Smith has 104 yards on the day so far. The Nittany Lions' McGloin passed for 76 yards in the quarter to put him over 200 yards for the game. McGloin has 219 yards through the air so far today. Penn State will start the fourth quarter with possession on its 35-yard line.

SECOND QUARTER: Penn State sniffed out Eastern Michigan's rushing attack in the second quarter, holding the Eagles to 20 rush yards and the Nittany Lions now lead 17-0. Penn State expanded its lead to 10-0 thanks to a five-play, 63-yard drive that ended when Matthew McGloin found Joe Suhey open for a 27-yard touchdown pass. The Nittany Lions opened up the lead, 17-0, after McGloin threw a five-yard touchdown pass to Derek Moye to end a five-play, 31-yard drive. The Nittany Lions will get the ball to start the second half.

FIRST QUARTER: The expected blowout hasn't materialized yet and Eastern Michigan is hanging tough with Penn State down 3-0 at the end of the first quarter. The Nittany Lions sniffed out the Eagles' rushing attack in the quarter, holding Eastern Michigan to 20 rush yards. Penn State struck first when Anthony Fera made a 29-yard field goal for a 3-0 lead, the final play of a seven-play, 45-yard drive. The Eagles have the ball on their 41-yard line to begin the second quarter.

Good news on D'Anton Lynn. He has been released after neck and spinal column were examined at Mt. Nittany Medical Center

Big prayers out there for D'Anton!

And after 13 quarters, #PennState has its first TD pass – McGloin to Suhey.

Oh Silas Redd hit the spin button on that one! Achievement unlocked!