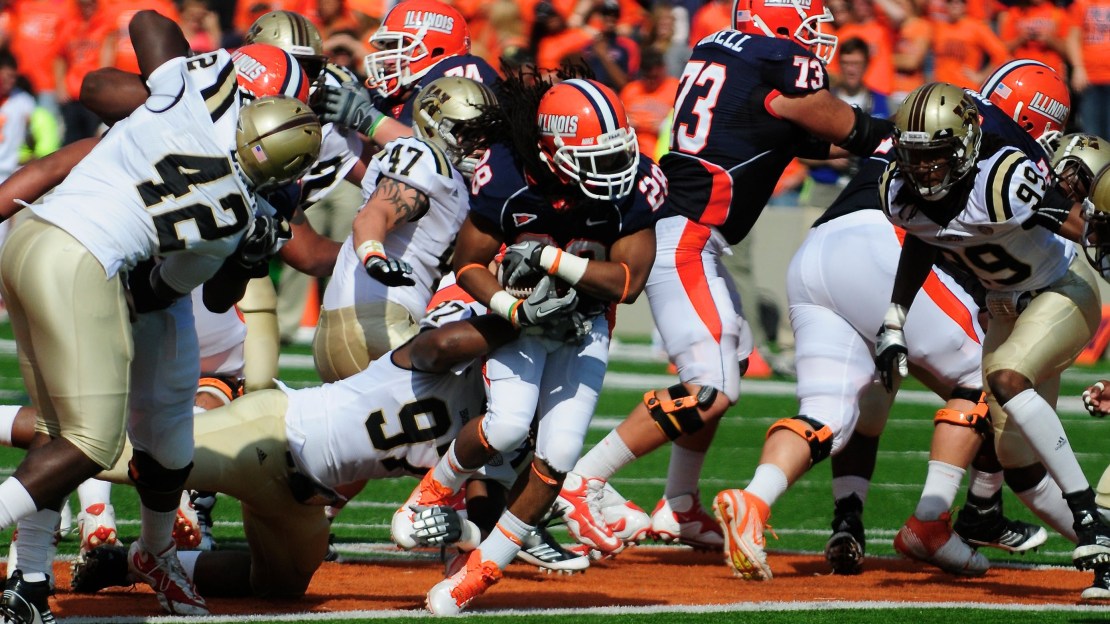 (AP) Troy Pollard carried the ball for a career-high 133 yards and No. 24 needed all three of Derek Dimke's field goals Saturday to survive Western Michigan, 23-20. The Illini trailed at the half 13-10 and the game was tied 20-20 with less than nine minutes to play. Booing Illini fans recalled a 23-17 loss to the Broncos (2-2) the last time the teams met in 2008. Pollard's 49-yard burst midway through the fourth quarter set up a 21-yard Dimke field goal that gave the Illini (4-0) the three-point lead they wouldn't give up. Western Michigan quarterback Alex Carder was 30 of 48 with two touchdowns, 306 yards and one interception. Read the full AP recap, check out the box score and see our Big Ten scoreboard.

FINAL: Illinois took the lead in the fourth quarter and hung on for a 23-20 victory over Western Michigan on Saturday at Memorial Stadium. With 8:14 to go, Derek Dimke made a 21-yard field goal to give Illinois (4-0) a 23-20 lead. The Fighting Illini pounded the ball on the ground against Western Michigan (2-2), finishing with 296 total rushing yards. The combo of Donovonn Young and Troy Pollard had 102 and 133 yards respectively. Home run plays keyed Illinois' scoring attack. The Fighting Illini burned the Broncos' defense for four plays of more than 20 yards. With 12:37 to go in the fourth quarter, Pollard ran 49 yards, Illinois' biggest gain of the game. The big gainer was part of a 13-play drive capped off when the Fighting Illini scored on Dimke's field goal. Nathan Scheelhaase threw for 130 yards while going 14-20 for the Fighting Illini. He threw one touchdown and one interception. Scheelhaase also ran for 40 yards on 17 attempts. A.J. Jenkins was the player Scheelhaase targeted most often. He hauled in six catches for 41 yards. Western Michigan's Alex Carder went 30 of 48 through the air for a total of 310 yards. Carder finished the game with two touchdowns and one interception. Carder had a trusted receiver in Jordan White. He caught 14 passes for 137 yards and one touchdown. The Broncos' offense finished the game having gained 343 yards. In addition to Carder's efforts through the air, Western Michigan could only muster 33 yards rushing on 21 attempts.

FOURTH QUARTER: Illinois beat Western Michigan 23-20 after taking a fourth quarter lead. With 8:14 to go, Derek Dimke made a 21-yard field goal to give the Fighting Illini the lead, 23-20. The Broncos tied the score at 20 apiece after Alex Carder found Jordan White open for an eight-yard touchdown pass to polish off a seven-play, 69-yard drive. Illinois broke the 20-20 tie when the Fighting Illini scored on Dimke's field goal to cap an 11-play, 77-yard scoring drive. Illinois used Troy Pollard's 49-yard run to fuel the drive. Pollard clinched a 100-yard rushing game with 80 in the quarter, part of a 133-yard day for the Fighting Illini.

THIRD QUARTER: Western Michigan refuses to give up, despite Illinois' 20-13 lead at the end of the third. The Fighting Illini have erupted for 10 straight points. Donovonn Young's 14-yard touchdown run put Illinois on top 17-13 after the last of a nine-play, 80-yard drive. The Fighting Illini added to their advantage when Derek Dimke made a 35-yard field goal, the clincher of a 13-play, 69-yard drive to give Illinois the lead, 20-13. The Broncos' Jordan White hit 100 yards receiving for the game in the quarter, part of his 105-yard, 11-reception performance thus far. Western Michigan will start the fourth quarter with the ball on the Fighting Illini's 37-yard line.

SECOND QUARTER: A potential upset is brewing as Western Michigan leads Illinois 13-10 at the end of the second quarter. The Fighting Illini have given up the last 10 points. Illinois made its lead 10-3 when Derek Dimke kicked a 39-yard field goal on the last play of a three-play, -7-yard drive. An interception by Terry Hawthorne put the Fighting Illini at the Broncos' 15-yard line to open the drive. Western Michigan made the score 10-6 after John Potter kicked a 24-yard field goal to finish off a 65-yard drive. The Broncos ran just two times during that march downfield. Alex Carder's 35-yard touchdown pass to Chleb Ravenell gave Western Michigan the lead, 13-10, and was the final play of a three-play, 39-yard drive. The Broncos began the drive with good field position at the Illinois 39-yard line after Western Michigan returned a punt. The Broncos' Carder topped 200 yards passing for the game in the quarter, and has plenty of time to add to his 205 total yards through the air. Illinois will start the second half with the ball.

FIRST QUARTER: Western Michigan refuses to wave the white flag, despite Illinois' 7-3 lead at the end of the first. The Fighting Illini took the game's first lead after Nathan Scheelhaase and Evan Wilson combined for an 11-yard touchdown on the last play of an eight-play, 74-yard drive to give Illinois the advantage, 7-0. The Fighting Illini used Scheelhaase's 39-yard pass to fuel the drive. The Broncos capped off a 58-yard drive when John Potter kicked a 26-yard field goal to make the score 7-3. Illinois will start the second quarter with the ball on its 21-yard line.

Pat Fitzgerald has to like what he sees in Champaign, if he can settle down his QB situation. WMich runs a very NU-like passing offense.

NEVER seen this before. W. Michigan flag for false start picked up bc Illinois band was still playing. Ref: "The band has to stop sooner."