Best of the Best: Week 4 Recap 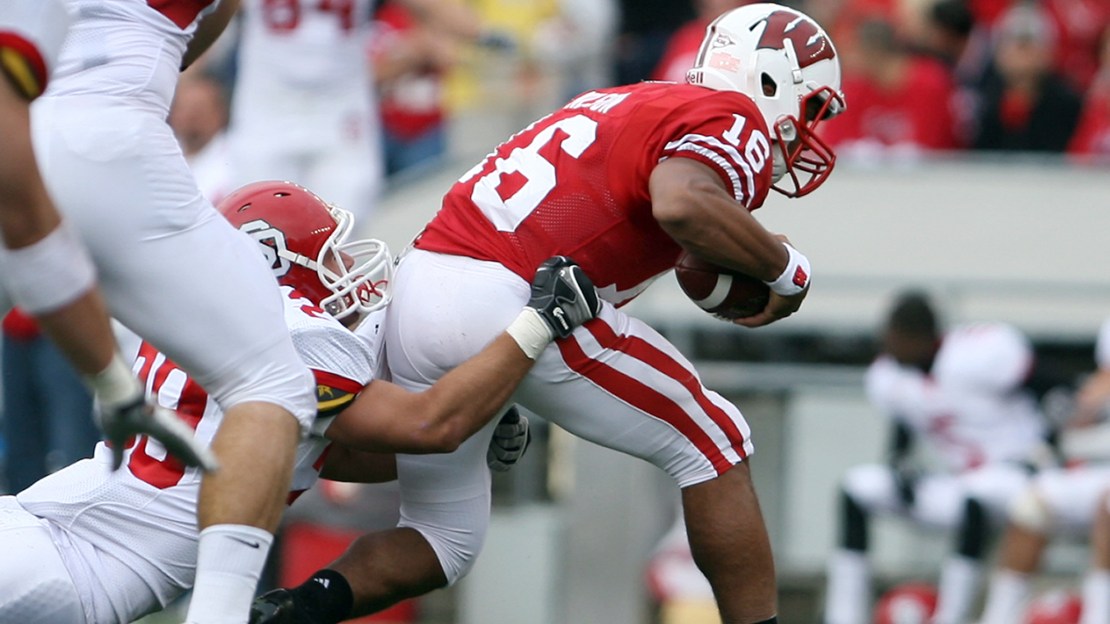 Every week during the fall, BTN.com web editor and blogger Brent Yarina recaps the week that was in Big Ten football. Each recap includes Brent?s superlative winners and the best stats, quotes and tweets, among other things, from around the Big Ten that particular week. Have a worthy stat, quote or tweet that you think should make the recap? Tweet it to @BTNBrentYarina. Watch our South Dakota-Wisconsin highlights now and check out Brent's Week 4 Recap in this post.

Game of the Week: Illinois 23, Western Michigan 20 – Not a lot of great candidates in a week where the Big Ten had a slate full of cupcakes, for the most part, so this close decision gets the nod. One week after beating then-No. 18 Arizona State, the Illini received more than they wanted from the Broncos, who beat them in 2008. Western Michigan led 13-10 at halftime and tied it up, at 20, early in the fourth quarter. But Illinois took the lead on a Derek Dimke chip shot and the defense denied the Broncos an attempt at a possible game-tying field goal in the final seconds.

Player of the Week: Russell Wilson, Wisconsin – Considering the opponent, South Dakota, Wilson was destined to have a huge day. He did exactly what everyone expected in Wisconsin's 59-10 win, completing 19 of 25 passes for 345 yards and three touchdowns. The blowout did nothing to help Wilson's overall numbers – Joe Brennan relieved him late – but he completed better than 70 percent of his passes (76 percent) for the fourth straight week and threw three scoring strikes for the third straight week. Yes, the competition has been far from good thus far, but Wilson makes everything look very easy.

Team of the Week: Michigan – The Wolverines moved to 4-0 for the third straight season, and they did so by beating previously perfect San Diego State, Brady Hoke's former employer. The Aztecs, in particular QB Ryan Lindley, didn't live up to all the hype, but much of the credit must go to Michigan's improved defense. The Wolverines forced three turnovers, including two Ronnie Hillman fumbles – his first lost fumbles since his first carry a year ago – to give them 13 turnovers on the season. Even more impressive, Michigan was able to card the easy win despite four turnovers of their own – which can be a positive or a negative, actually.

Impression of the Week: The Iowa pass attack lives to see another week. Entering Saturday's game, it was unknown whether Kirk Ferentz would give the no-huddle offense, the one that helped the Hawkeyes pull off the largest comeback in school history last week, another chance. He did, and it worked just as well against Louisiana-Monroe. Iowa scored on its first possession, less than four minutes into the game, and Vandenberg was lethal again, completing 21 of 32 passes for 271 yards and three scores, to go along with a running score. This is an exciting offense right now, possibly the most exciting in the Big Ten.

Impression of the Week II: Michigan's defense is much improved. Greg Mattison has made all the difference in his first season back in Ann Arbor. The Wolverines are a much different defense under him than they were during Rich Rodriguez's tenure. This unit attacks and hustles, and it is very opportunistic as a result. Through the first four games, Michigan has created 13 turnovers, including three Saturday, and is surrendering just 12.8 points per game, 21 points better than last season.

Impression of the Week III: Denard and Taylor have a lot of work to do. Nobody doubts Robinson or Martinez's running ability, but their passing games are not improving at the rate many would have thought. Neither quarterback has a completion percentage anything close to respectable – Robinson 49 percent, Martinez 51 percent – and the two prolific players have combined for just 10 touchdowns and eight interceptions through the air. It's even more troublesome when you consider the off-target passes and poor decisions are coming in nonconference play, because it's only going to get tougher for these guys. Robinson's passing troubles are so pronounced, in fact, the Wolverines can't run their new pro-style offense. As for Martinez, it's tough to be so critical of the man who's operating an offense that is averaging 42.8 points per game this season, but his struggles hitting receivers are pretty clear.

Impression of the Week IV: It's still Wisconsin, and then a lot of question marks when it comes to the Big Ten. The Badgers, despite playing a very soft schedule, seem to be the only sure thing in the Big Ten. In other words, Wisconsin is going to be good and it is a serious Big Ten title contender. After Bret Bielema's team, though, it's anyone's guess. Illinois has impressed early on, except for Saturday's scare from Western Michigan, but the other Big Ten preseason favorites, Michigan State, Nebraska and Ohio State, have been a little inconsistent and remain mysteries. Iowa is 3-1 and looks great on offense, but its defense has taken a step back from years past and it has been killed by injuries. Much like the very top of the Big Ten, the bottom is pretty clear, with Indiana and Minnesota struggling to 1-3 records, including losses to New Mexico State, North Dakota State and North Texas.

With its 45-17 victory over Louisiana-Monroe, Iowa has scored at least 30 points in its first four games since 2002.

It wasn't a dominant performance, but Braxton Miller got the job done in his first career start, throwing touchdown passes on two of his five completions and running for 83 yards in Ohio State's bounceback win.

Ohio State forced two Colorado turnovers, one more than it had in its first three games combined, and limited the Buffaloes to 77 rushing yards one week after allowing 240 yards on the ground at Miami.

Other than the scoreboard, it was a rough day for the Nittany Lions, who saw D'Anton Lynn leave on a stretcher and Michael Mauti suffer a season-ending ACL injury. Best wishes to both of those guys.

With its 23-20 victory over Western Michigan, Illinois moved to 4-0 for the first time since its national title season of 1951.

On its way to handing Minnesota its second home loss to an FCS team in as many years, North Dakota State had touchdown drives of 65, 83 and 71 yards in the first half and didn't face a fourth down until 6:25 was left in the third quarter.

Dusty Kiel threw the first two touchdown passes of his career in Indiana's loss at North Texas. The backup quarterback nearly led the Hoosiers back from a 24-0 fourth-quarter deficit, only to fall short, 24-21.

Rex Burkhead ran for a career-high 170 yards in Saturday night's win at Wyoming. He scored two touchdowns for the second week and has 290 rushing yards in the last two games.

It was a great run for Jared Crick, who saw his streak of starting 31 straight games for Nebraska end Saturday due to injury.

Taylor Martinez attempted 21 passes for the third straight week. The only time he didn't throw 21 times, he attempted 22 in the season opener.

"He reminds me so much of Devin Hester when he was at Miami." – BTN analyst Chris Martin, on Denard Robinson following his 53-yard touchdown run.

"Brady will win a national championship here. I don't know how long it will take, but he will win one here." – San Diego State coach Rocky Long, on Brady Hoke and his ability to win at Michigan.

"I slept pretty good. I really didn't have any jitters at all." – Braxton Miller, on his first career start.

"It was very uncomfortable. I didn't know how I was going to feel until I got here. Coach D means a lot to me and my family. He's a good man." – Central Michigan coach and former Michigan State assistant Dave Enos, on playing his former team.

"Very excited for this week to get here. You guys might have heard: We're playing Nebraska." – Bret Bielema, on next week's Big Ten opener against Nebraska

"Sometimes you've got to go through games like that. There's a lot of times, teams would have lost that game." – Ron Zook, on holding off Western Michigan, 23-20

"It doesn't surprise me. Rex is a heck of a player and ran his butt off again tonight." – Bo Pelini, on Rex Burkhead's career-best rushing performance.

This just in: Taylor Martinez struggles when throwing the ball.

Brett Maher kicking and punting the ball tonight like it's filled with helium. Safety time?

Wyoming students chant "overrated" as the #Huskers take the field.

Pat Fitzgerald has to like what he sees in Champaign, if he can settle down his QB situation. WMich runs a very NU-like passing offense.

That's 22 rushing TDs for Montee Ball since last Nov. 6 … more than every #B1G TEAM except Illinois over that span #Badgers

Paul Chryst makes adjustments on the fly better than a lot of NFL OC's. #Badgers

Give respect when respect is due. @BraxtonMiller5 made some plays that had me out of my sit cheering. #WelcometoMillerTime

Big prayers out there for D'Anton!

Good day to be a Hawkeye

Lindley was billed as an NFL-caliber QB. I hope he likes Canada. #umsdsu

Oh Silas Redd hit the spin button on that one! Achievement unlocked!

#Michigan had not scored in the 1st quarter of its previous 3 games to Eastern Michigan, Notre Dame and Western Michigan