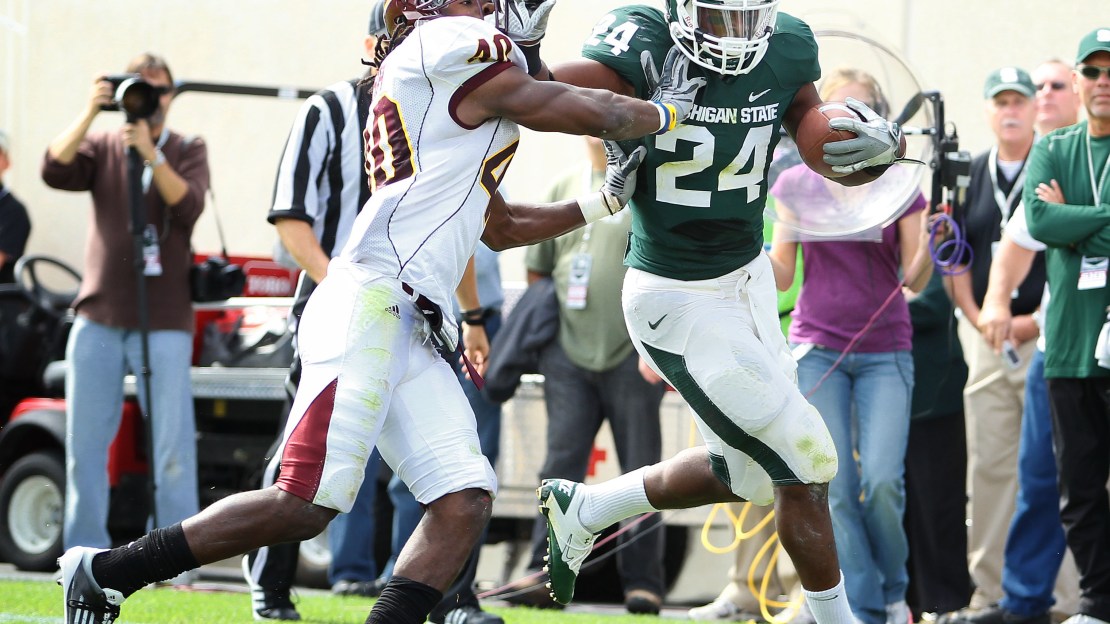 (AP) Le'Veon Bell ran for 81 yards and three touchdowns – all in the first half – to lead Michigan State to a 45-7 victory over in-state rival Central Michigan on Saturday. The Spartans (3-1) bounced back from last weekend's loss at Notre Dame, taking advantage of four Central Michigan turnovers. Isaiah Lewis returned an interception 37 yards for a touchdown, helping Michigan State race to a 31-0 halftime lead. The Chippewas (1-3) finally scored in the third quarter after a blocked punt when Ryan Radcliff threw a 5-yard touchdown pass to David Blackburn. Read the full AP recap, check out the box score and see our Big Ten scoreboard.

FOURTH QUARTER: Michigan State completed its blowout of Central Michigan with a strong fourth quarter and took home a 45-7 victory. The Spartans went on a 14-point run to finish the game. Michigan State opened up the lead, 45-7, after marching down the field for a five-play, 42-yard drive that ended when Andrew Maxwell and Dion Sims combined for a three-yard touchdown. The Spartans began the drive with good field position at the Chippewas' 42-yard line after Nick Hill returned a punt.

THIRD QUARTER: Michigan State's defense held tough in the third quarter, holding Central Michigan to 25 total yards of offense and the margin is still 31, as the Spartans lead 38-7. The Chippewas capped off a 13-yard drive when Ryan Radcliff tossed a five-yard touchdown to David Blackburn to make the score 31-7. Central Michigan started in good field position at Michigan State's 13-yard line when Kevin King blocked a punt. The Spartans made their lead 38-7 when Kirk Cousins and Larry Caper combined for a 15-yard touchdown on the last play of a six-play, 71-yard drive. Michigan State's took the Spartans from their 54-yard line across midfield and ignited the drive. Michigan State's Cousins reached the 200-yard passing mark for the game thanks to 71 in the quarter, and currently sits with 213 yards in all. The Spartans will start the fourth quarter with good field position on the Chippewas' one-yard line.

SECOND QUARTER: Twenty-four points in the second quarter has given Michigan State a commanding 31-0 lead. The Spartans opened up the lead, 14-0, after Le'Veon Bell ran five yards to paydirt to end a five-play, 63-yard drive. Michigan State made the score 21-0 when Isaiah Lewis intercepted A.J. Westendorp's pass and returned it for a touchdown. The Spartans added to their advantage when Dan Conroy drilled a 23-yard field goal, capping off a five-play, 23-yard drive to give Michigan State the lead, 24-0. An interception by Max Bullough put the Spartans at the Central Michigan 29-yard line to open the drive. Michigan State expanded its lead to 31-0 thanks to a nine-play, 62-yard drive that ended when Bell turned a handoff into a 13-yard touchdown. The Spartans' rushing attack finished with just one carry during that march downfield. Central Michigan is set to receive to start the second half.

FIRST QUARTER: Central Michigan continues to hang around, but still trails No. 23 Michigan State 7-0 at the end of the first quarter. The Spartans got on the scoreboard first, rattling off a seven-play, 80-yard drive that ended in a score when Le'Veon Bell turned a handoff into a one-yard touchdown, putting Michigan State on top, 7-0. The key play on the Spartans' drive was Kirk Cousins' 54-yard pass to B.J. Cunningham. Michigan State threw just one time on that possession. The Chippewas will start the second quarter with the ball on their 34-yard line.

Trenton Robinson on the Postgame: "We played pretty well today. But we've got a lot of work to do before we go to the Horseshoe."