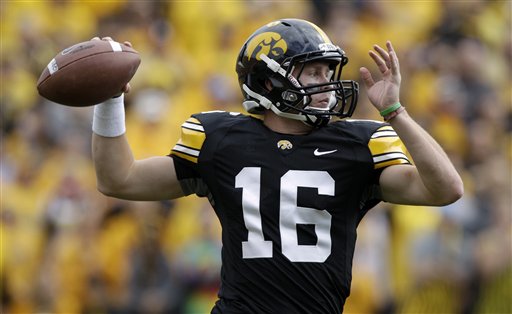 On Monday morning, the Big Ten Conference announced its players of the week for Week 3. The honorees include four first-time winners, highlighted by Iowa's James Vandenberg, the Offensive Player of the Week. Vandenberg threw for 162 of his 399 passing yards and for all three of his touchdown passes in a remarkable fourth quarter to help Iowa tally its largest comeback in school history. The junior quarterback also added a rushing score, for good measure, as the Hawkeyes rallied from a 21-point deficit against Pittsburgh.

Defensive honors went to Illinois' Jonathan Brown, who lived in the Arizona State backfield all night, with 3.5 tackles for loss and 1.5 sacks. Brown also forced Arizona State's first interception by hitting Brock Osweiler as he was throwing, and he later picked off a pass himself. Minnesota's Duane Bennett earned Special Teams Player of the Week for his blocked punt that he returned for a touchdown in the Gophers' 29-23 win over Miami (OH). And Indiana's D'Angelo Roberts claimed Freshman of the Week laurels after rushing for 102 yards, including a seven-yard scoring run.

Check out Brent Yarina's Week 3 Recap, which includes his Player of the Week, and his Power Rankings. Where is your team ranked in the national polls? And where does it fall in the Big Ten standings?

Did you miss the highlights of Vandenberg leading Iowa all the way back against Pittsburgh? Watch them below: