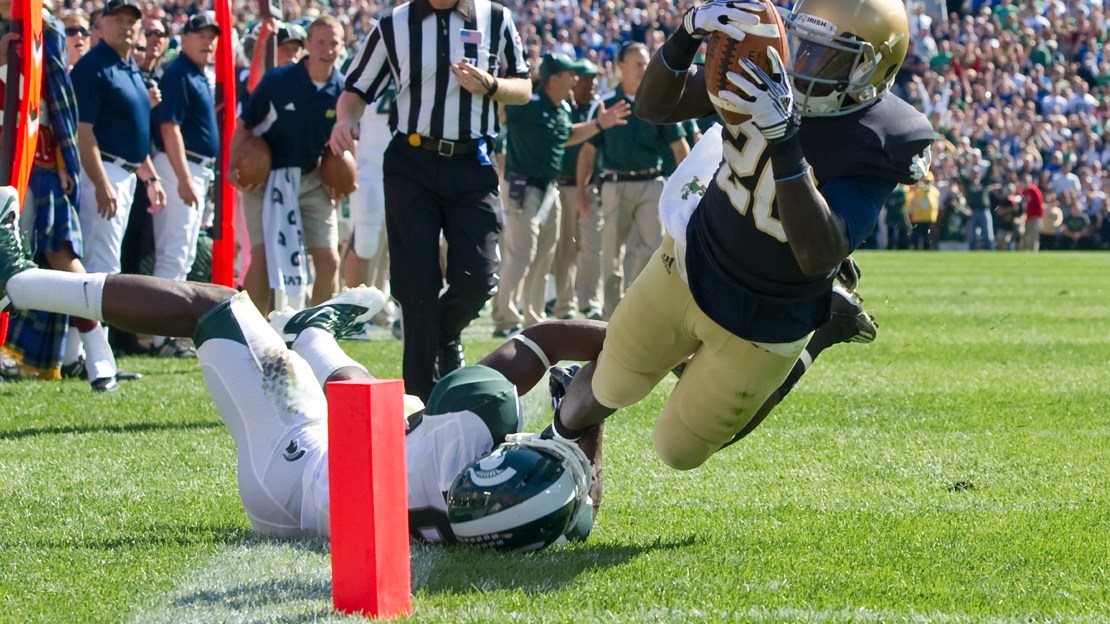 (AP) Cierre Wood ran for two touchdowns, freshman George Atkinson III returned a kickoff 89 yards for a score and Robert Blanton had a late interception Saturday as Notre Dame beat No. 15 Michigan State 31-13 for its first win. The Spartans (2-1), who stunned Notre Dame in overtime a year ago with a game-winning TD pass off a fake field goal, tried to surprise the Irish again after lining up for a field goal near the end of the first half. Notre Dame (1-2) was ready this time. Michigan State's Kirk Cousins, who had 11 straight completions at one juncture of the second half, was 34-for-53 for 329 yards. Read the full AP recap, check out the box score and see our Big Ten scoreboard.

FINAL: Notre Dame burned No. 15 Michigan State with long plays en route to a 31-13 victory on Saturday at Notre Dame Stadium. Notre Dame (1-2) added to the highlight reel when Tommy Rees found Michael Floyd open for a 33-yard pass with 5:16 left in the second quarter. The big gainer was part of a 15-play drive capped off when Cierre Wood pounded in a six-yard touchdown run. That gave the Fighting Irish a 21-10 lead. Even though Michigan State (2-1) racked up the yards against Notre Dame, it wasn't able to secure the victory. The Fighting Irish were burned for 358 total yards, but in six trips to the red zone, the Spartans only scored three times. Although Notre Dame featured a porous defense throughout the game, it was able to hang on for the win. The Fighting Irish's defense stood tall on third downs, holding Michigan State to a 29.4 percent success rate on third down. Notre Dame's Rees went 18 of 26 through the air for a total of 161 yards. Rees finished the game with one touchdown and one interception.  The Fighting Irish racked up 276 total yards. Notre Dame's rushing attack contributed 115 yards on 32 carries in addition to Rees' passing effort. Kirk Cousins threw for 327 yards while completing 34 of 53 passes for the Spartans. Cousins finished the game with one touchdown and one interception. B.J. Cunningham was a key target for Cousins. He hauled in 12 catches for 157 yards.

FOURTH QUARTER: Notre Dame finished off No. 15 Michigan State 31-13. A 41-yard drive that ended when Dan Conroy kicked a 35-yard field goal helped the Spartans narrow the deficit to 28-13. Michigan State ran just two times. Notre Dame added to its advantage when David Ruffer kicked a 34-yard field goal, capping off a four-play, -5-yard drive to give the Fighting Irish the lead, 31-13. Notre Dame started in good field position at the Michigan State 12-yard line thanks to Robert Blanton's interception of Kirk Cousins' pass. B.J. Cunningham clinched a 150-yard receiving game with 80 yards in the quarter, part of a 12-catch, 157-yard day for the Spartans.

THIRD QUARTER: Notre Dame stuffed the run, giving up just nine yards on the ground in the third quarter and the Fighting Irish now lead 28-10. No. 15 Michigan State has given up the last 14 points. Notre Dame opened up a lead, 28-10, after Tommy Rees hit TJ Jones in the endzone from 26 yards out to end an eight-play, 71-yard drive. The Fighting Irish relied on a run play just two times. Notre Dame will start the fourth quarter with the ball on its 15-yard line.

SECOND QUARTER: Notre Dame's Cierre Wood led the offense in the second quarter. He ran for seven yards and one touchdown and caught one pass for five yards and the margin is still 11, as the Fighting Irish lead 21-10. No. 15 Michigan State closed the gap to 14-10 when Kirk Cousins tossed a six-yard touchdown to Dion Sims to cap an 80-yard drive. Notre Dame expanded its lead to 21-10 thanks to 10-play, 92-yard drive that ended when Wood pounded in a six-yard touchdown run. The Spartans are set to receive to start the second half.

FIRST QUARTER: Notre Dame rushed for 75 yards in the first quarter and the Fighting Irish lead 14-3 at the end of the quarter. Notre Dame's front seven stepped up in the quarter, allowing zero rushing yards to No. 15 Michigan State. The Fighting Irish got on the scoreboard first, rattling off an eight-play, 76-yard drive that ended when Cierre Wood pounded in a 22-yard touchdown run, putting Notre Dame on top, 7-0. The Fighting Irish kept the ball on the ground during the drive, throwing only two passes. The Spartans made the score 14-3 after Dan Conroy drilled a 40-yard field goal to finish off a 27-yard drive. Kurtis Drummond intercepted Tommy Rees' pass to put Michigan State at the Notre Dame 27-yard line to open the drive. The Spartans will start the second quarter with possession.