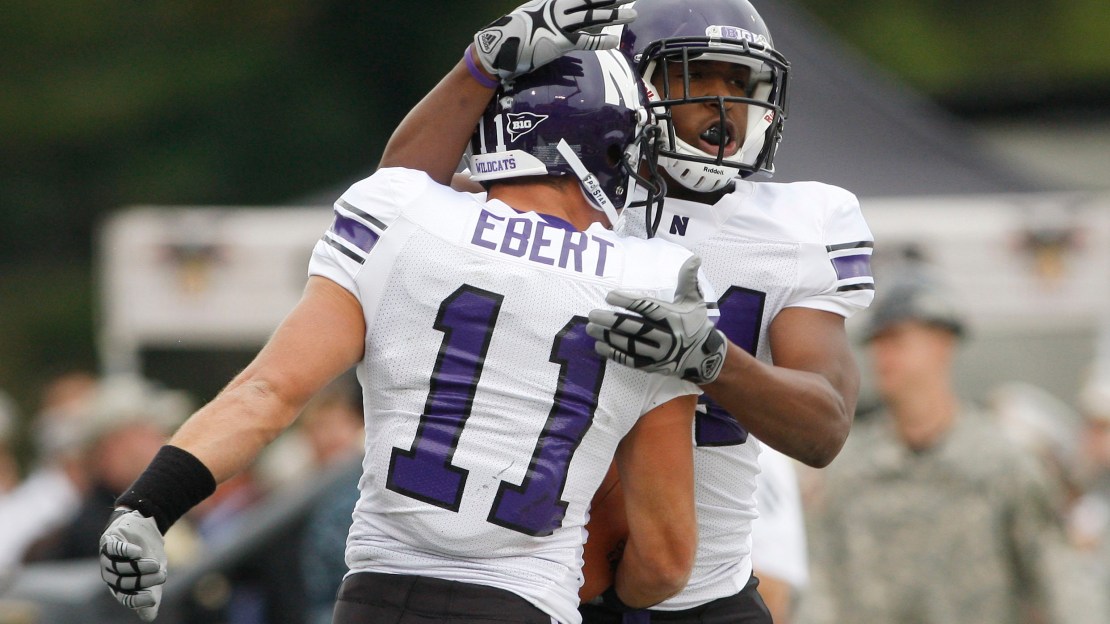 (AP) Trent Steelman scored three touchdowns for the second straight week, including the game-winner on a 1-yard plunge with 2:49 remaining, and Army beat Northwestern 21-14 on Saturday. Steelman also scored on runs of 1 and 17 yards, and the swarming Army defense turned up the pressure in the second half. Malcolm Brown had a 23-yard gain on a pitch right for Army (1-2), Raymond Maples added a 17-yard run off a great fake in the middle of the line, and Scott Williams had a 17-yard run around the left side to key the game-winning drive. Read the full AP recap, check out the box score and see our Big Ten scoreboard.

FINAL: Trent Steelman broke out against Northwestern, piling up 108 rushing yards and scoring three touchdowns to lead Army to a 21-14 victory on Saturday at Blaik Field at Michie Stadium. Army (1-2) didn't capture the lead until the fourth quarter. With 2:49 to go, Steelman turned a handoff into a one-yard touchdown to give the Black Knights a 21-14 lead. Army racked up 387 total yards. The Black Knights' rushing attack contributed 381 yards on 75 carries in addition to Steelman's passing effort. Army's Steelman was good for six yards during the game, completing one of seven passes. He also threw no interceptions. Northwestern's (2-1) Kain Colter passed for 88 yards, completing 12 of 23 throws. He tossed one touchdown and no interceptions. Colter was also a threat on the ground, as he rushed for 58 yards on 10 attempts. Colter looked for Jeremy Ebert often. He caught six passes for 108 yards and two touchdowns. The Wildcats' offense finished the game having gained 309 yards, including 193 passing yards on 17 completions. Rushing was a key ingredient in Northwestern's offensive mix, bringing it 116 yards on 27 carries.

FOURTH QUARTER: Army captured the lead in the fourth quarter and hung on for the 21-14 win over Northwestern. With 2:49 to go, Trent Steelman pounded in a one-yard touchdown run to give the Black Knights the lead, 21-14. The Wildcats tied things up at 14 when a three-play, 80-yard drive ended after Trevor Siemian found Jeremy Ebert open for a 62-yard touchdown pass. Army broke the stalemate with a nine-play, 75-yard drive that ended with the Black Knights on top 21-14 after Army scored on Steelman's run. The Black Knights looked exclusively to the run game. Northwestern's Ebert topped 100 yards receiving for the game in the quarter, and finished his day with 108 yards on six catches.

THIRD QUARTER: Army stifled Northwestern's offense, giving up just 10 total yards in the third quarter and the Black Knights now lead 14-7. Army sniffed out the Wildcats' rushing attack in the quarter, holding Northwestern to one rushing yard. A 10-play, 73-yard drive by the Black Knights ended when Trent Steelman pounded in a one-yard touchdown run, breaking the tie and giving Army the lead, 14-7. The Black Knights didn't throw a single time. Army has the ball on its 14-yard line to begin the fourth quarter.

SECOND QUARTER: Northwestern's Kain Colter threw for 64 yards and one touchdown and ran for 57 yards in the quarter, and the two teams are tied 7-7 at the end of the second. The Wildcats tied the score at seven apiece after Colter found Jeremy Ebert open for a 14-yard touchdown pass to cap an 11-play, 51-yard drive. Northwestern threw just three times. Army will receive to start the second half.