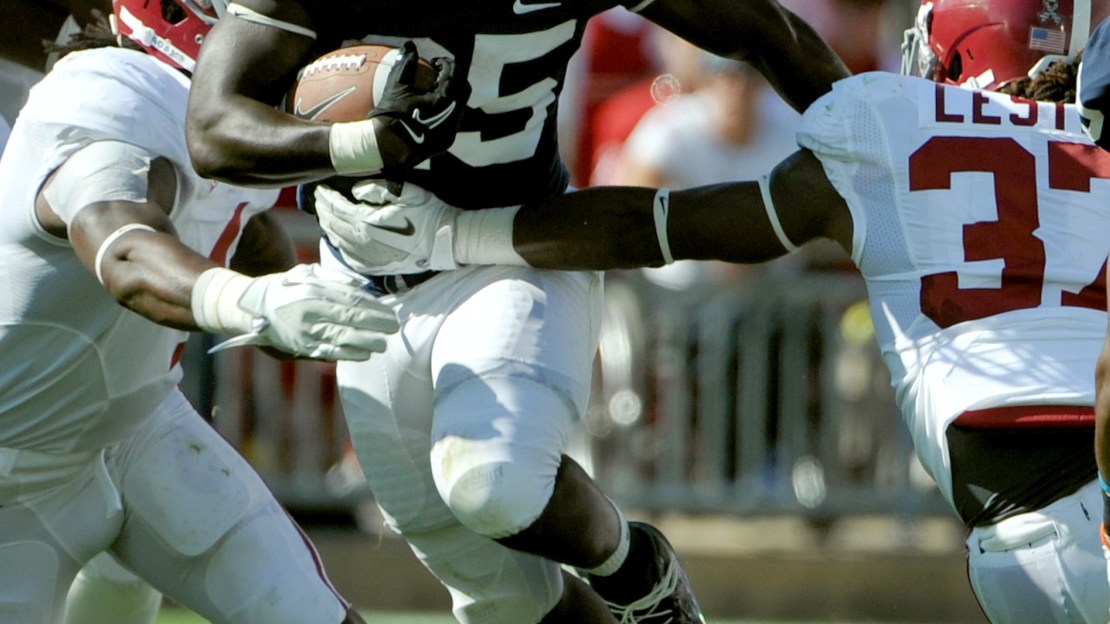 (AP) A.J. McCarron was poised and efficient in a rare trip into Big Ten country for No. 3 Alabama, throwing for 163 yards and a touchdown against No. 23 Penn State in a 27-11 victory on Saturday. Alabama completed a sweep of the home-and-home series between the two storied programs with a methodical and smothering performance reminiscent of last year's 24-3 win in Tuscaloosa. Both teams came into the second week of the season with unsettled quarterback issues. For Penn State, Nittany Lions (1-1) fans might be wondering if either Robert Bolden or Matt McGloin are the answer. They combined to go 12 for 39 for 144 yards. Read the full AP recap, check out the box score and see our Big Ten scoreboard.

FINAL: Alabama used an explosive offensive attack to power its way to a 27-11 win against Penn State on Saturday at Beaver Stadium. With 7:12 to go in the fourth quarter, Eddie Lacy ran 30 yards, the Crimson Tide's biggest gain of the game. The big play set up a seven-play drive that gave Alabama a 27-3 lead after Trent Richardson pounded in a 13-yard touchdown run. Richardson carried the offensive load for the Crimson Tide, piling up 109 rushing yards and two touchdowns on 26 attempts. Silas Redd did his best to carry the Nittany Lions' offense, turning 22 carries into 66 rushing yards and one touchdown. Rob Bolden threw for 143 yards while going 11-29 for Penn State. He threw one interception. Bolden also ran for 25 yards on four attempts. The Nittany Lions' offense finished the game having gained 248 yards, including 143 passing yards on 12 completions. Rushing was a key ingredient in Penn State's offensive mix, bringing it 105 yards on 30 carries. AJ McCarron threw for 165 yards while completing 19 of 31 passes for Alabama. McCarron finished the game with one touchdown and no interceptions. The Crimson Tide racked up 359 total yards. Alabama's rushing attack contributed 194 yards on 41 carries in addition to McCarron's passing effort.

FOURTH QUARTER: Alabama ran for 88 yards in the fourth quarter and the Crimson Tide finished off Penn State 27-11. Alabama opened up a 27-3 lead after Trent Richardson turned a handoff into a 13-yard touchdown to end a five-play, 65-yard drive. The Nittany Lions capped off a 71-yard drive when Silas Redd pounded in a one-yard touchdown run to make the score 27-11. Penn State put two more on the board when Rob Bolden ran for the conversion. The Crimson Tide's Richardson went over 100 yards rushing for the game in the quarter, he finished with 109 yards rushing.

THIRD QUARTER: The two teams combined for more punts than points in a slow third quarter and Alabama now leads 20-3. There were four punts in the quarter as neither team could find a way to move the ball. The Crimson Tide made their lead 20-3 when Jeremy Shelley kicked an 18-yard field goal on the last play of a 11-play, 50-yard drive. Alabama's drive stalled at Penn State's one-yard line and the Crimson Tide settled for a field goal. Alabama has the ball on its 35-yard line to begin the fourth quarter.

SECOND QUARTER: Alabama stifled Penn State's offense, giving up just 33 total yards in the second quarter and the Crimson Tide now lead 17-3. Alabama's secondary stifled the passing game, allowing just 22 yards through the air to the Nittany Lions in the quarter. The Crimson Tide added to their advantage when Jeremy Shelley made a 21-yard field goal capping off a 10-play, 52-yard drive to give Alabama a 10-3 lead. The Crimson Tide will start the second half with the ball.

FIRST QUARTER: Alabama held Penn State to 19 yards through the air during the first quarter and the Crimson Tide lead 7-3 at the end of the first quarter. The Nittany Lions started the scoring off when Evan Lewis drilled a 43-yard field goal to cap off a 16-play 54-yard drive, which gave Penn State a 3-0 lead. AJ McCarron's five-yard touchdown pass to Michael Williams finished off an 11-play, 69-yard drive and gave Alabama a 7-3 lead. The Nittany Lions have possession on their 20-yard line to start the second quarter.