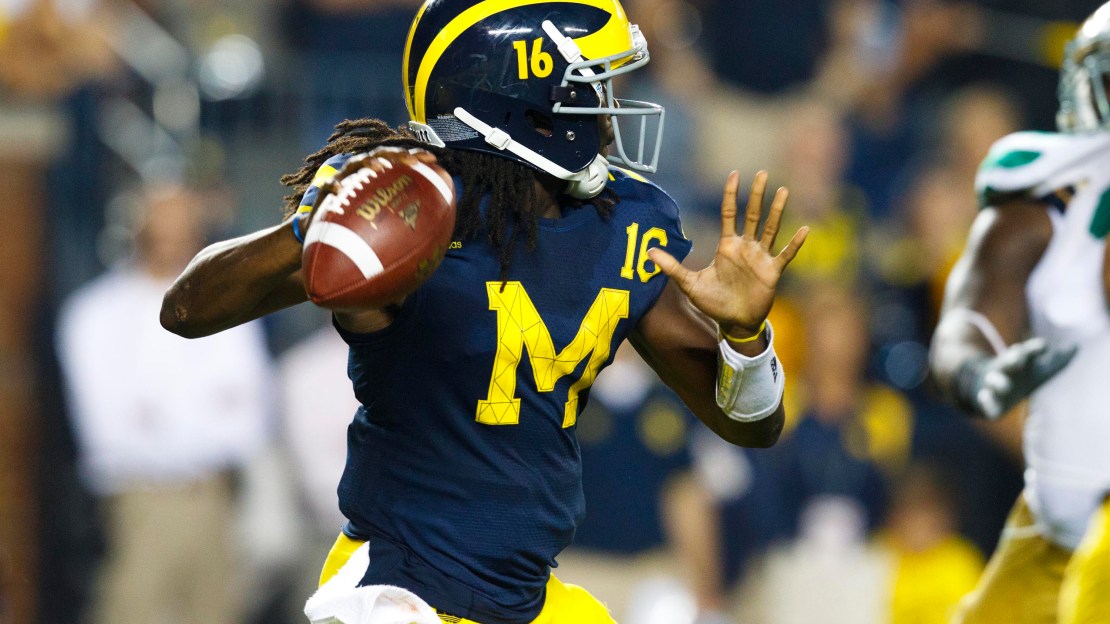 (AP) Denard Robinson threw a 16-yard pass to Roy Roundtree with 2 seconds left, lifting Michigan to a 35-31 heart-pounding win over Notre Dame on Saturday night. The Wolverines took their first lead on Robinson's 21-yard pass to Vincent Smith with 1:12 left, then lost it. Briefly. Tommy Rees threw a 29-yard touchdown pass to Theo Riddick with 30 seconds left, but the Fighting Irish left Jeremy Gallon wide open on a pass that let Michigan go from its 20 to the Notre Dame 16. The Wolverines (2-0) have won three straight against the rival Irish (0-2) on late-game plays by quarterbacks. Last year, it was Robinson and Tate Forcier in 2009. It was the first night game at Michigan Stadium – and it lived up to the hype. Read the full AP recap, check out the box score and see our Big Ten scoreboard.

FINAL: Denard Robinson threw for 338 yards and four touchdowns, leading Michigan to a 35-31 victory over Notre Dame on Saturday at Michigan Stadium. Things looked grim for the Wolverines, but Michigan stormed back to clinch the victory. The Wolverines climbed back from a 17-point deficit to pull off the comeback. Michigan and the Fighting Irish put on an entertaining offensive show. The teams went wild on the attacking side of the ball, racking up 965 total yards combined. The Wolverines operated their air game to perfection in dismantling Notre Dame's defense. Michigan's air attack couldn't be contained, as it torched the Fighting Irish for 338 yards and four touchdowns. Robinson completed 11 of 24 passes for the Wolverines. Michigan racked up 452 total yards. The Wolverines complemented Robinson's passing with 114 yards rushing on 26 attempts. Notre Dame's Tommy Rees was good for 315 yards during the game, completing 27 of 39 passes. Rees finished the game with three touchdowns and two interceptions. Rees had a good connection with receiver Michael Floyd. He hauled in 13 catches for 159 yards. The Fighting Irish's offense finished the game having gained 513 yards. Along with Rees' stats in the passing game, Notre Dame also added 198 yards rushing on 33 attempts.

FOURTH QUARTER: At one point Michigan trailed by 17 points, but the Wolverines came back to take a 35-31 lead at the end of the fourth quarter. With 2:05 to go in the third quarter Michigan looked to be in trouble, but it has stormed back to take the lead. The Wolverines made the score 24-14 when Michigan recovered a fumble in the endzone. The Wolverines made the score 24-21 after Denard Robinson hit Jeremy Gallon in the endzone from 14 yards out to finish off a a 40-yard drive. A punt return put Michigan at Notre Dame's 40-yard line to open the drive. Robinson's 21-yard touchdown pass to Vincent Smith finished off a five-play, 58-yard drive and gave the Wolverines a 28-24 lead. Tommy Rees' 29-yard touchdown pass to Theo Riddick gave the Fighting Irish the lead 31-28 after a four-play 61-yard drive. Robinson's 16-yard touchdown pass to Roy Roundtree gave Michigan the lead for good, 35-31, after a three-play 80-yard drive. The Wolverines' Robinson went over 100 yards rushing and 300 yards passing for the game in the quarter. He finished with 108 yards rushing and 338 yards passing.

THIRD QUARTER: Notre Dame rushed for 89 yards in the third quarter and the Fighting Irish now lead 24-7. Notre Dame has erupted for 10 straight points. The Fighting Irish expanded their lead to 24-7 thanks to seven-play 71-yard drive that ended when Tommy Rees tossed a 15-yard touchdown to TJ Jones. Michigan's Junior Hemingway went over 100 yards receiving for the game in the quarter. He now has 120 yards receiving in the game. Notre Dame's Cierre Wood went over 100 yards rushing for the game in the quarter and has 125 yards rushing so far. The Fighting Irish's Rees moved past 200 yards passing for the game in the quarter and has 218 yards passing in the game. The Wolverines have possession on Notre Dame's one-yard line to start the fourth quarter.

SECOND QUARTER: Notre Dame held Michigan to 20 yards on the ground during the second quarter and the Fighting Irish are now up just 17-7. The Wolverines closed the gap to 14-7 when Denard Robinson threw a 43-yard touchdown pass to Junior Hemingway to cap a 45-yard drive. A Jordan Kovacs interception set Michigan up at Notre Dame's 45-yard line to start. The Fighting Irish's Michael Floyd went over 100 yards receiving for the game in the quarter, he now has 112 yards receiving in the game. Notre Dame will get the ball to start the second half.