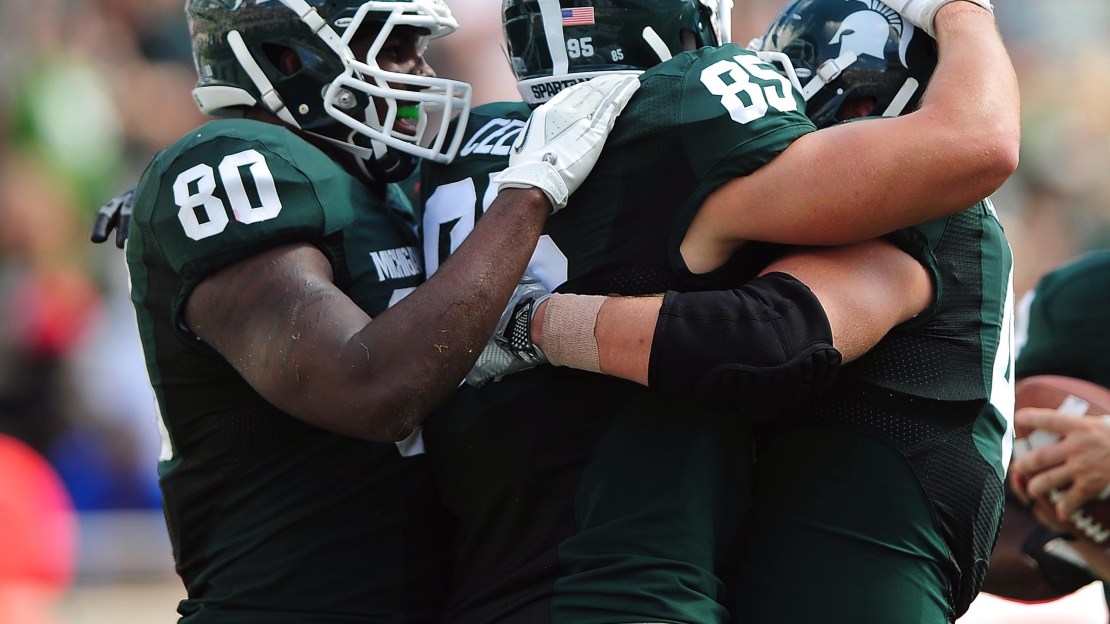 (AP) Kirk Cousins threw for 183 yards and two touchdowns, and No. 17 Michigan State held Florida Atlantic to one first down in a 44-0 victory over the Owls on Saturday. B.J. Cunningham caught five passes for 73 yards, breaking a tie with Matt Trannon for Michigan State's career lead in receptions. The Spartans (2-0) led 27-0 at halftime and ended up outgaining FAU 434-48. The Owls (0-2) have scheduled a brutal opening month. They opened at Florida and play at Auburn in two weeks. Cousins finished 16 of 21, and backup Andrew Maxwell also played quite a bit. Read the full AP recap, see the box score and view the Big Ten scoreboard.

Check out our quarter-by-quarter Rapid Recap, powered by Narrative Science:

FINAL: Kirk Cousins and Le'Veon Bell teamed up to lead Michigan State to a 44-0 victory over Florida Atlantic on Saturday at Spartan Stadium. Cousins passed for 184 yards, while Bell ran for 68 yards and one touchdown. The Spartans operated their air game to perfection in dismantling the Owls' defense. Michigan State's air attack couldn't be contained, as it torched Florida Atlantic for 247 yards and two touchdowns. The Spartans' explosive offense used big plays to take down the Owls. Florida Atlantic's defense gave up five plays of at least 20 yards. Michigan State added to the highlight reel when Cousins found Keshawn Martin open for a 39-yard pass with 8:28 left in the second quarter. The big gainer was part of a 13-play drive capped off when Dan Conroy made a 41-yard field goal. That gave the Spartans a 20-0 lead. The Owls' Graham Wilbert was good for 16 yards during the game, completing four of 10 passes. He also threw no interceptions. Florida Atlantic racked up 45 total yards, including 27 yards passing while completing six of 13 attempts. The Owls rushed 20 times for just 18 yards.

FOURTH QUARTER: Michigan State's defense shut down Florida Atlantic, allowing only 15 yards of offense in the fourth quarter and the Spartans finished off the Owls 44-0. Michigan State made its lead 37-0 when Kevin Muma made a 28-yard field goal on the last play of a 14-play, 69-yard drive. The Spartans used a grind-it-out style, as no play went for more than eight yards. Michigan State threw just three times. The Spartans made the score 44-0 when Michigan State returned a fumble for a touchdown.

THIRD QUARTER: Michigan State's defense held tough in the third quarter, holding Florida Atlantic to three total yards of offense and the Spartans now lead 34-0. Michigan State opened up a 34-0 lead after Kirk Cousins found Garrett Celek open for a eight-yard touchdown pass to end a 13-play, 56-yard drive. The Spartans have possession on their 49-yard line to start the fourth quarter.

FIRST QUARTER: Michigan State's defense shut down Florida Atlantic, allowing only nine yards of offense in the first quarter and the Spartans lead 14-0 at the end of the first quarter. Michigan State got on the scoreboard first, rattling off a seven-play, 51-yard drive that ended in a score when Edwin Baker ran nine yards to paydirt, putting the Spartans on top, 7-0. Michigan State made its lead 14-0 when Le'Veon Bell turned a handoff into a two-yard touchdown on the last play of a 12-play, 73-yard drive. The Owls will start the second quarter with possession on their 19-yard line.