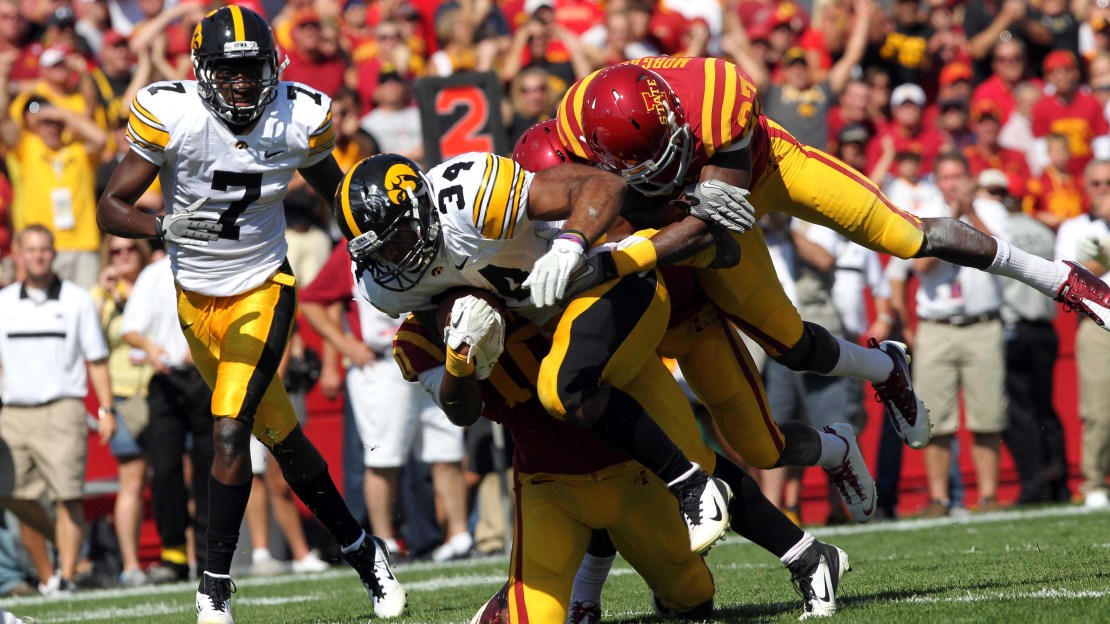 (AP) James White's 4-yard TD run in triple overtime pushed Iowa State past rival Iowa 44-41 on Saturday, snapping a three-game losing streak to the rival Hawkeyes in thrilling fashion. Steele Jantz led the way for Iowa State (2-0) with 279 yards passing and four touchdowns and White added a pair of OT touchdowns. White's 1-yard run put the Cyclones on top 38-31 in double overtime, but Iowa quarterback James Vandenberg's 23-yard TD pass to Keenan Davis tied it back up. Iowa went ahead 41-38 on Mike Meyer's 41-yard field goal. But the Hawkeyes defense had no answer for Jantz and White in extra time. Marcus Coker had 140 yards rushing and two touchdowns for Iowa (1-1). Read the full AP recap, check out the box score and see our Big Ten scoreboard.

FINAL: Iowa State and Iowa treated football fans to a classic that finally ended in a three-overtime 44-41 win for the Cyclones on Saturday at Jack Trice Stadium.After the Hawkeyes kicked a field goal on their drive to start the third overtime, Iowa State scored on James White's four-yard touchdown run to capture the victory. Marcus Coker was a bright spot in defeat for Iowa, as he rushed for 138 yards on 35 carries and scored two touchdowns. Steele Jantz mounted the Cyclones' unstoppable air attack, finishing with 271 passing yards and four touchdowns on 24 completions. Iowa State and the Hawkeyes put on an entertaining offensive show. Both teams provided fireworks on offense, as they gained 835 yards in total. The Cyclones' offense finished the game having gained 472 yards, including 280 passing yards on 25 completions. Rushing was a key ingredient in Iowa State's offensive mix, bringing it 192 yards on 52 carries. Iowa's James Vandenberg went 16 of 28 through the air for a total of 207 yards. Vandenberg finished the game with two touchdowns and no interceptions. Vandenberg had a trusted receiver in Keenan Davis. He caught five passes for 95 yards and one touchdown. The Hawkeyes racked up 363 total yards, including 207 yards passing while completing 16 of 29 attempts. Iowa's ground game balanced its offense, bringing 156 yards on 43 attempts.

THIRD QUARTER: Iowa State sniffed out Iowa's rushing attack in the third quarter, holding the Hawkeyes to eight rush yards and the Cyclones now lead 17-16. Iowa State's passing attack looked sharp, as the Cyclones threw for 88 yards in the quarter. Iowa broke the stalemate with a five-play, 19-yard drive that ended with the Hawkeyes on top 13-10 after Mike Meyer made a 19-yard field goal. A fumble recovery put Iowa at Iowa State's 21-yard line to open the drive. The Hawkeyes made their lead 16-10 when Meyer kicked a 49-yard field goal on the last play of a six-play, 44-yard drive. Iowa's rushing attack finished with just two carries. Steele Jantz's eight-yard touchdown pass to Josh Lenz finished off a five-play, 73-yard drive and gave the Cyclones a 17-16 lead. Iowa State has the ball on its 12-yard line to begin the fourth quarter.

SECOND QUARTER: Iowa State's Darius Reynolds caught two passes for 20 yards and one touchdown in the quarter, but the two teams are tied 10-10 at the end of the second. The Cyclones have erupted for 10 straight points. Iowa expanded its lead to 10-0 thanks to 10-play 52-yard drive that ended when Mike Meyer kicked a 40-yard field goal. Iowa State capped off a 12-yard drive when Steele Jantz hit Reynolds in the endzone from 11 yards out to make the score 10-7. The Cyclones started in good field position at the Iowa 12-yard line because Iowa State recovered a fumble. The Cyclones got even after Grant Mahoney drilled a 53-yard field goal to end a nine-play, 21-yard drive that tied the score at 10. No single play was longer than nine yards. The Hawkeyes will receive to start the second half.

FIRST QUARTER: Strong play by the offense carried Iowa to seven points in the first quarter and the Hawkeyes lead 7-0 at the end of the first quarter. Iowa racked up 74 passing yards and 61 rushing yards in the quarter. The Hawkeyes took the game's first lead after James Vandenberg found Kevonte Martin-Manley open for a six-yard touchdown pass on the last play of a 12-play, 82-yard drive to give Iowa a 7-0 advantage. The Hawkeyes have the ball on Iowa State's 27-yard line to begin the second quarter.