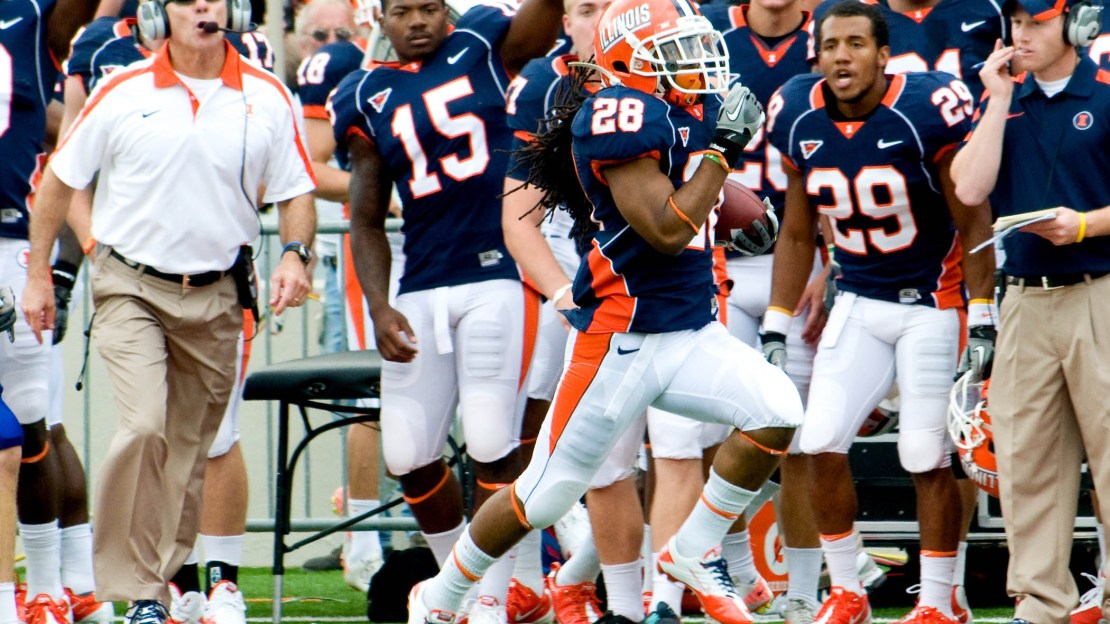 (AP) Freshman running back Donovonn Young introduced himself to Illinois fans with a pair of touchdowns and Nathan Scheelhaase ran for two more on Saturday in a 56-3 blowout over South Dakota State. Illinois (2-0) rolled up 519 yards of offense and allowed just 96. Young scored on a 2-yard run to give the Illini a 7-0 lead. The Houston native showed speed and strength on a 41-yard second-quarter touchdown that put the Illini up 35-3 over the Jackrabbits (1-1) at the half. Scheelhaase took a seat in the third quarter with 93 yards rushing and 102 passing yards on six completions. Illinois' defense picked off South Dakota State quarterback Thomas O'Brien twice. Read the full AP recap, check out the box score and see our Big Ten scoreboard.

Check out our quarter-by-quarter updates, powered by Narrative Science:

FINAL: Nathan Scheelhaase broke out against South Dakota State, piling up 94 rushing yards and scoring two touchdowns to lead Illinois to a 56-3 victory on Saturday at Memorial Stadium. The Fighting Illini's offense dominated, ripping off huge chunks of yardage. Illinois burned the Jackrabbits' defense for five plays of more than 20 yards. With 1:28 to go in the first quarter, Troy Pollard ran 61 yards, the Fighting Illini's biggest gain of the game. The big play set up a six-play drive that gave Illinois a 14-0 lead after Jason Ford ran four yards to paydirt. The Fighting Illini's Reilly O'Toole went nine of nine through the air for a total of 49 yards. O'Toole finished the game with one touchdown and no interceptions. A.J. Jenkins was a key target for O'Toole. He hauled in five catches for 67 yards. Illinois' offense finished the game having gained 514 yards, including 153 passing yards on 16 completions. The Fighting Illini's running game proved effective, netting 361 yards on 50 rushes. South Dakota State's Thomas O'Brien was good for 37 yards during the game, completing eight of 18 passes. He also threw two interceptions. The Jackrabbits racked up 95 total yards, including 71 yards passing while completing 11 of 22 attempts. South Dakota State struggled to move the ball on the ground, earning 24 yards on 24 attempts.

FOURTH QUARTER: Illinois finished off its blowout of South Dakota State with a strong fourth quarter and won 56-3. The Fighting Illini expanded their lead to 56-3 thanks to 12-play 77-yard drive that ended when Troy Pollard turned a handoff into a seven-yard touchdown. Illinois' Pollard finished with 100 yards rushing in the game.

THIRD QUARTER: Illinois picked up 77 yards in the ground game during the third quarter and the Fighting Illini now lead 49-3. Illinois stifled South Dakota State's offense, giving up just three total yards in the quarter. The Fighting Illini expanded their lead to 42-3 thanks to 13-play 81-yard drive that ended when Nathan Scheelhaase pounded in a three-yard touchdown run. Pass plays were an afterthought for Illinois, as the Fighting Illini threw just three passes. Illinois added to its advantage when Reilly O'Toole found Evan Wilson open for a eight-yard touchdown pass capping off a six-play, 30-yard drive to give the Fighting Illini a 49-3 lead. A Supo Sanni interception set Illinois up at the South Dakota State 30-yard line to start. The Jackrabbits have possession on their 30-yard line to start the fourth quarter.

SECOND QUARTER: Illinois rushed for 82 yards in the second quarter and the Fighting Illini now lead 35-3. Illinois opened up a 28-0 lead after Nathan Scheelhaase ran four yards to paydirt to end a seven-play, 71-yard drive. The Fighting Illini threw just one time. South Dakota State made the score 28-3 after Kyle Harris kicked a 33-yard field goal to finish off a a 36-yard drive. Illinois added to its advantage when Donovonn Young pounded in a 41-yard touchdown run capping off a five-play, 69-yard drive to give the Fighting Illini a 35-3 lead. Illinois will have possession to start the second half.

FIRST QUARTER: Illinois racked up 144 rushing yards in the first quarter and the Fighting Illini lead 21-0 at the end of the first quarter. Illinois started the scoring off when Donovonn Young ran two yards to paydirt to cap off a 10-play 80-yard drive, which gave the Fighting Illini a 7-0 lead. Illinois kept the ball on the ground during the drive, throwing only two passes. The Fighting Illini added to their advantage when Jason Ford turned a handoff into a four-yard touchdown capping off a three-play, 82-yard drive to give Illinois a 14-0 lead. A 27-yard interception return by Trulon Henry increased Illinois' lead to 21-0. South Dakota State has possession on its 15-yard line to start the second quarter.