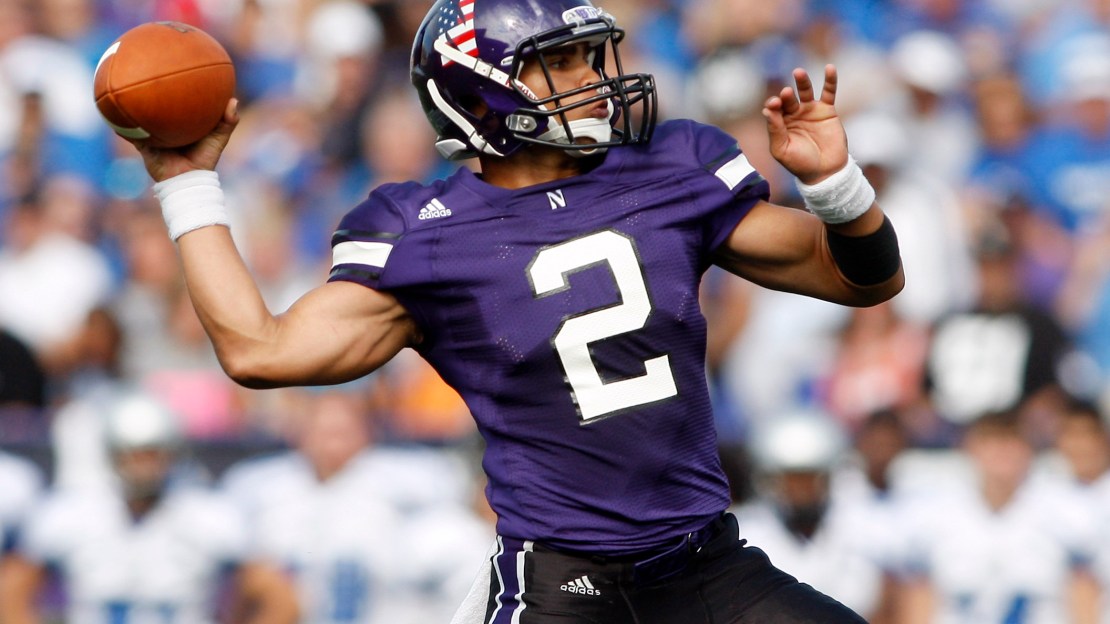 (AP) Kain Colter delivered again while filling in for star Dan Persa, running for a career-high 109 yards with three touchdowns and throwing for 104 more to lead Northwestern to a 42-21 victory over Eastern Illinois on Saturday. With Persa in uniform but still recovering from a ruptured Achilles tendon, Colter came through with another impressive performance after leading the Wildcats to a 24-17 win at Boston College in the opener. The sophomore wound up with more than 100 yards rushing for the second time in his career. When he wasn't running by the Panthers (1-1), he completed 10 of 13 passes without an interception to lead Northwestern (2-0) to an easy win over an FCS opponent. Read the full AP recap, check out the box score and see our Big Ten scoreboard.

FINAL: Kain Colter put the team on his back in Northwestern's 42-21 win over Eastern Illinois on Saturday at Ryan Field, rushing for 108 rushing yards and three touchdowns. The Panthers' Kenny Whittaker was productive despite the team loss. He scored one touchdown and snagged two passes, good for 77 receiving yards. The Wildcats' offense finished the game having gained 431 yards, including 116 passing yards on 12 completions. Northwestern also rushed 67 times for 315 yards. The Wildcats' Colter was good for 104 yards during the game, completing 10 of 13 passes. He also threw no interceptions. Eastern Illinois' Jimmy Garoppolo went 14 of 25 through the air for a total of 209 yards. Garoppolo finished the game with one touchdown and one interception. The Panthers' offense finished the game having gained 350 yards. Eastern Illinois complemented Garoppolo's passing with 141 yards rushing on 26 attempts.

FOURTH QUARTER: Northwestern's Tyris Jones led the offense in the fourth quarter. He ran for 18 yards and caught a one-yard touchdown pass and the Wildcats kept the game out of reach for a 42-21 victory over Eastern Illinois. Northwestern expanded its lead to 42-14 thanks to eight-play 27-yard drive that ended when Trevor Siemian threw a one-yard touchdown pass to Jones. The Wildcats started in good field position at the Eastern Illinois 27-yard line because Venric Mark returned a kickoff there. Northwestern went to the air just two times. The Panthers closed the gap to 42-21 when Taylor Duncan ran three yards to paydirt to cap an 81-yard drive. The Wildcats' Kain Colter went over 100 yards rushing for the game in the quarter, he finished with 108 yards rushing. Eastern Illinois' Jimmy Garoppolo went over 200 yards passing for the game in the quarter, he finished the game 209 yards passing.

THIRD QUARTER: Northwestern racked up 98 rushing yards in the third quarter and the margin is still 21, as the Wildcats lead 35-14. Northwestern expanded its lead to 35-7 thanks to 11-play 48-yard drive that ended when Kain Colter ran eight yards to paydirt. The Wildcats' drive began with good field position at the Eastern Illinois 48-yard line when Venric Mark returned a kickoff for a touchdown. Northwestern went to the air just one time. Eastern Illinois made the score 35-14 after AJ Woodson turned a handoff into a two-yard touchdown to finish off a a 80-yard drive. The Wildcats' Colter now has 100 yards rushing in the game. Northwestern will start the fourth quarter with possession on the Panthers' 19-yard line.

SECOND QUARTER: Northwestern has raced out to an early lead and are on top 28-7 at the end of the second. The Wildcats have scored 14 straight points. Eastern Illinois capped off a 80-yard drive when Jimmy Garoppolo threw a 72-yard touchdown pass to Kenny Whittaker to make the score 14-7. Northwestern opened up a 21-7 lead after Kain Colter turned a handoff into a four-yard touchdown to end a 10-play, 58-yard drive. The Wildcats went to the air just one time. Northwestern expanded its lead to 28-7 thanks to an 11-play 47-yard drive that ended when Treyvon Green pounded in a two-yard touchdown run. The Wildcats' drive began with good field position at the Eastern Illinois 47-yard line thanks to Scott Weatherford's punt return. Northwestern will start the second half with the ball.

FIRST QUARTER: Northwestern's two big plays led to 14 points and the Wildcats lead 14-0 at the end of the first quarter. Northwestern got on the scoreboard first, rattling off an eight-play, 42-yard drive that ended in a score when Kain Colter turned a handoff into a five-yard touchdown, putting the Wildcats on top, 7-0. Northwestern started in good field position at Eastern Illinois' 42-yard line because Bryce McNaul intercepted Jimmy Garoppolo's pass. The Wildcats made their lead 14-0 when Jacob Schmidt pounded in a one-yard touchdown run on the last play of an 11-play, 65-yard drive. Northwestern threw just two times. The Wildcats will start the second quarter with the ball on their 19-yard line.