Best of the Best: Week 2 Recap 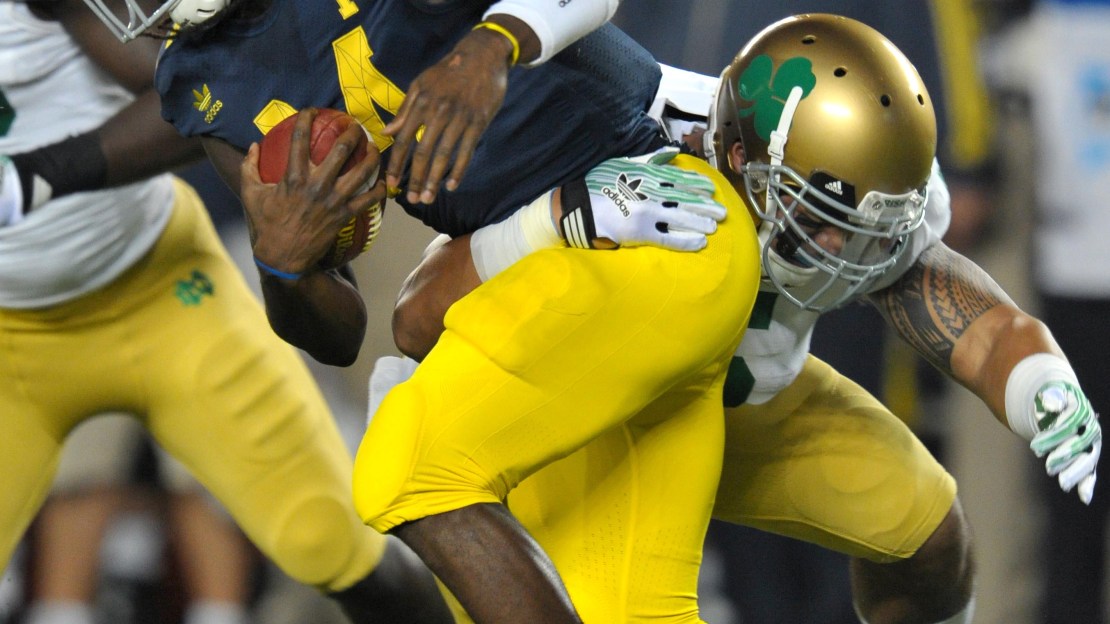 Every week during the fall, BTN.com web editor and blogger Brent Yarina recaps the week that was in Big Ten football. Each recap includes Brent?s superlative winners and the best stats, quotes and tweets, among other things, from around the Big Ten that particular week. Have a worthy stat, quote or tweet that you think should make the recap? Tweet it to @BTNBrentYarina. Watch now as Michigan head coach Brady Hoke and star quarterback Denard Robinson talk about their thrilling win over Notre Dame.

Game of the Week: Michigan 35, Notre Dame 31 – The first night game in Michigan Stadium history sure lived up to all the hype. First, Michigan scored 21 unanswered points to erase a 24-7 third-quarter deficit before quickly blowing the lead. Then, down 31-28, Denard Robinson led the Wolverines on a three-play, 80-yard scoring drive to give Michigan a 35-31 lead with two seconds left. The Wolverines could have went for overtime and attempted a game-tying field goal on the last play, but they called for a Robinson pass to the end zone. It worked, of course, as Roy Roundtree hauled in the winning grab. In all, the teams combined for three touchdowns in the final 1:12 and Michigan scored 28 of the 35 fourth-quarter points.

Player of the Week: Denard Robinson, Michigan – For all the sensational individual games Robinson has had, this latest one might be the greatest. The star quarterback accounted for 446 of Michigan's 452 total yards and threw four touchdowns, including the game-winner to Roy Roundtree with two seconds left. Without Robinson at his best, there's no way Michigan erupts for 28 fourth-quarter points, or is able to rally from a 17-point deficit.

Team of the Week: Michigan – What else can you say about Michigan? The Wolverines' latest win over rival Notre Dame was as big as any in recent memory. It was the program's third straight win over the Fighting Irish, and that's important because former coach Rich Rodriguez was responsible for the first two wins. Had Michigan not won this latest game against Notre Dame, who knows what kind of pressure Brady Hoke would have felt. Michigan fans will not soon forget this win. As Brent Musburger said, it was an "instant classic."

Impression of the Week: At the risk of sounding cheesy, it's amazing how little the outcome of a game means when a man's health is in question. This was crystal clear when first-year Minnesota coach Jerry Kill suffered a seizure on the Gophers' sideline in the closing seconds of a 28-21 loss to New Mexico State. Kill, who has a history of seizures, went down on his back with 20 seconds left, and at times his arms and legs were flapping back and forth. It was a terrible scene, needless to say. Fifteen minutes later, he was taken off the field to "Jerry! Jerry!" chants. Minnesota lost on the next play, but it didn't really seem that important.

Impression of the Week II: Penn State doesn't have a quarterback. Alabama is going to make a lot of quarterbacks look really bad, but for the second straight week, the Nittany Lions passing game was out of sync, ugly and ineffective. Even more troubling, the Nittany Lions don't seem any better off whether it's Rob Bolden or Matt McGloin under center. It'd be nice if one of the guys was moving the offense or if one could provide a little consistency. That isn't the case. Through two games, the two are a combined 24 for 59 (41 percent), including McGloin's 1 for10 Saturday, for 258 yards, zero touchdowns and one interception.

Impression of the Week III: The bottom quarter of the Big Ten – Indiana, Minnesota and Purdue – is worse than many people may have thought. Minnesota lost to New Mexico State at home, Purdue lost at Rice a week after needing a blocked field goal to beat Middle Tennessee State and Indiana lost to Virginia at home. Those three opponents were a combined 10-26 last season. Yes, it's a different year, but all three of those teams are ones Big Ten teams should beat.

Impression of the Week IV: As Nebraska fans will tell you, as great as Taylor Martinez is, he can be rather frustrating. While Martinez was a beast on the ground again Saturday, rushing for 166 yards and two scores, he struggled in the passing game, going 10 for 21 for 219 yards, one score and two picks. He also fumbled twice and several of his passes were well off target. Two games in, the sophomore has completed 49 percent of his passes against Chattanooga and Fresno State. To his credit, though, he is playing behind a young and inexperienced offensive line. Still, Martinez won't find the ground as kind once the schedule flips to October, so he needs to become more accurate.

Stats of the Week

Illinois' 56-3 win over South Dakota State marked its biggest win since 1944, a 79-6 crushing of Illinois-Normal; Illinois outgained SDSU on the ground, 364-25.

Iowa and Iowa State had never played a game that went to overtime in the rivalry's previous 59 meetings. The 85 points marked the highest-scoring game in series history.

Michigan State allowed just 26 passing yards in its 44-0 victory over Florida Atlantic, the lowest total since giving up 10 to Army in 1984 Cherry Bowl.

Denard Robinson accounted for 446 of Michigan's 452 total yards in its comeback victory over Notre Dame.

"I caught it the third time. Third bobble, brought it in." – B.J. Cunningham, on his record-breaking 149th career reception.

"I haven't had a shutout since high school." – Wisconsin's Antonio Fenelus, on blanking Oregon State, 35-0, the team's first shutout since 2009.

"We certainly deserved a whooping today. I think we've just got a lot of work ahead of us." – Joe Paterno, on Penn State's performance against No. 3 Alabama.

"We're going to find out what this football team wants to be. Period." – Bo Pelini, on what he told his players when they were down 17-14 at halftime to Fresno State.

"It's never over until you see zeros on the clock." – Denard Robinson, on Michigan's 35-31 come-from-behind victory over Notre Dame.

Congrats, B.J. Cunningham. The Michigan State wide receiver became the program's all-time leading receiver with his first reception Saturday. It was a highlight-reel catch, too. Cunningham tipped it three times before finally hauling it in while on his back. Cunningham entered the game tied with Matt Trannon atop the school list.

Look out for that Illinois offense. A week ago, it was Nathan Scheelhaase, A.J. Jenkins, Darius Millines and the passing game leading the way. On Saturday, it was all about the running game. The Illini torched South Dakota State for 364 yards on the ground and had four guys score a rushing touchdown, including two with a pair of scores. This offense is very good.

John Simon is tough and clutch. The Ohio State defensive lineman battled cramps and went into the locker room before returning and forcing  Toledo's Terrance Owens into an incompletion on fourth down with 48 seconds left to seal a 27-22 win.

Former Ohio State assistant Tim Beckman has himself a fun team. Toledo wasn't given much of a chance against the Buckeyes — after all, it had not scored in its last two meetings in Columbus — but it nearly pulled off the upset. The Rockets offense is fun to watch, and it will give the MAC fits this year.

Montee Ball's streak of scoring four touchdowns in his last three regular-season games, dating back to last year, came to an end in Wisconsin?s 35-0 victory over Oregon State. The Badger star scored twice — not a bad total at all.

Jacob Pedersen is well on his way to becoming the next great Wisconsin tight end, this after grabbing six passes for 80 yards and two scores against Oregon State. In two games, he has eight receptions, 100 yards and three touchdowns.

Kain Colter may not be a Heisman contender or pubbed as such, but the Northwestern backup quarterback is playing a lot like Dan Persa. He's accurate through the air (27 for 37) and doing more than his share of damage on the ground (180 yards, 4 TDs).

Thoughts and prayers go out to Jerry Kill. I've never seen such a scene in my life, and I hope to never see one again. It's hard to imagine what the Gophers are thinking right now, but let's hope they can recover.

Speaking of returns, how about Nebraska's Ameer Abdullah? The freshman's 100-yard kickoff return was incredible, in addition to timely. Fresno State had just cut the deficit to two points before the kick, and his return, for all intents and purposes, put the game away.

Michigan ND. Most exciting finish I can remember. Brian Kelly must fight not to lose his team. Denard has market cornered on Heisman wow

Let's see the NFL play a game Sunday as entertaining as that classic Michigan-Notre Dame game.

One of the best michigan football games ever……

ND vs. Michigan = wish they could somehow both lose… #gogreen

Alright, Michigan's had enough. Let's get the sun back out.

PSU : It's not a knock but 2 Qb's means no Qb's. But in fairness to PSU, Alabama defense is ridiculous and returns a legit group but…..

S/o to all my teammates friends family and fans for the thanks and support! Love yall!! #SpartanNation

No more of this! I'm having a heart attack over here!

Congrats to the my bro @BjCunningham_03. We knew you could do it. Breaking records out there.

Glad we could capitalize on that -4 yard punt lol. That has to be a record.