ND-Michigan To Air At 8 ET Sunday On BTN 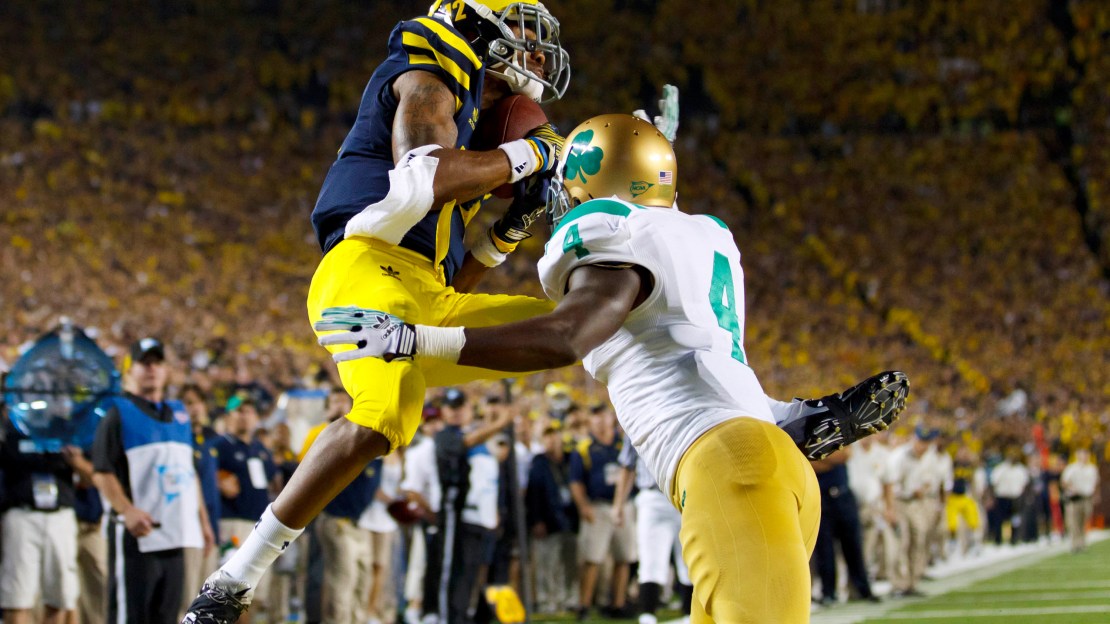 Saturday night's Notre Dame-Michigan game was so great, let's do it again. At 8 p.m. ET Sunday on BTN, catch a replay of the game as part of "BTN Football Game of the Week." If you didn't catch the game live, you don't want to miss it again. The Wolverines scored 28 fourth-quarter points, including the decisive score with two seconds left, to rally past rival Notre Dame 35-31 in the first night game at Michigan Stadium.

The late victory helped the Big Ten finish an up-and-down day with a 7-5 record. It was a frustrating day for the Big Ten, as four of its losses came down to the final drive. Dive into our Big Ten football scoreboard to catch up on all 12 Big Ten games and check out the latest polls. Also, read Brent Yarina's Week 2 recap. Watch the highlights from the Wolverines' comeback win  now and catch the full game Sunday night. Check out the best Michigan-ND tweets inside, too.

Michigan ND. Most exciting finish I can remember. Brian Kelly must fight not to lose his team. Denard has market cornered on Heisman wow

Let's see the NFL play a game Sunday as entertaining as that classic Michigan-Notre Dame game.

As I wake up this AM honored as a Michigan Legend I could not be more proud of the men in Maize&Blue. They stepped up 2 the challenge.#UTL

One of the best michigan football games ever……

I get why some NFL fans don't like college football, and vice-versa, but only the latter could give you a final 90 seconds like ND-Michigan

The past 3 years, Michigan has scored game winning TDs against ND with 11, 27, and 2 seconds left in the game #swag #goblue

Staying in to watch the games? Use the BTN GameFinder. Heading out to the games? Check the weather at each site on our Big Ten football weather pages.