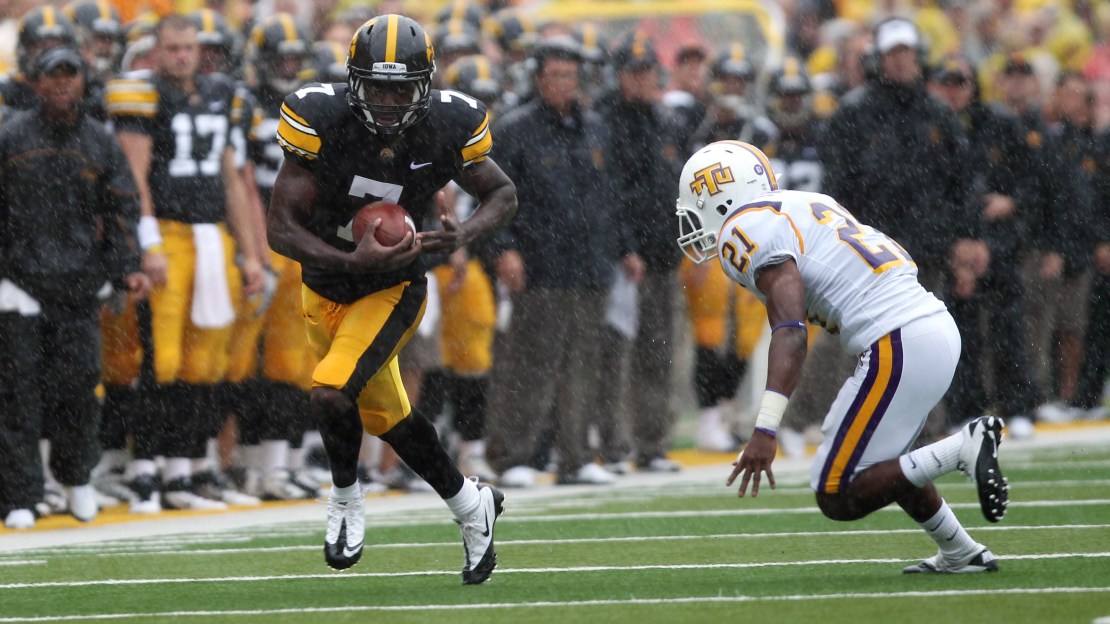 Every week during the college football season, Brent Yarina posts his latest Big Ten Power Rankings. One week in the books, the conference is 10-2, with the two defeats coming by a combined nine points. As for the power rankings, they are not meant to mimic the Big Ten standings. What fun would that be? They aren't scientific, either. They're simply Brent's thoughts on where each Big Ten team stands after its latest game and entering its next contest. Agree? Disagree? Tweet @BTNBrentYarina.

1. Wisconsin (1-0) – Russell Wilson was terrific, both with his arm and legs, and the slimmed-down Montee Ball didn't look all that bad himself. Ball and James White give the Badgers the Big Ten's elite 1-2 running back punch. Both backs should be even better this season as a result of defenses having to respect Wilson's running ability.
Last week: No. 1
Next game: vs. Oregon State

2. Nebraska (1-0) – If Taylor Martinez can improve as a passer (11-22, 116 yards, 0 TD), the Huskers will be nearly impossible to beat. As it is, Nebraska is hard enough to beat, what with one of the Big Ten's best defenses and a prolific running game, including Martinez. All the concerns out there about the offensive line seem a bit premature. Give the young guys some time, and then we'll know if it's a problem.
Last week: No. 2
Next game: vs. Fresno State

3. Ohio State (1-0) – The Buckeyes were without eight players due to suspensions, and yet they trounced overwhelmed Akron, 41-0. Sure, the Zips aren't a quality opponent, by any means, but Ohio State — in particular Joe Bauserman, Jake Stoneburner and the entire defense (90 total yards!) — gave Buckeye fans a lot to be excited about.
Last week: No. 5
Next game: vs. Toledo

4. Michigan State (1-0) – The Spartans' drop of one spot is a result of how Ohio State played, not a reaction to their lackluster victory over Youngstown State. Michigan State will be fine on both sides of the ball. Teams, they say, make the biggest improvement from Week 1 to Week 2, and this is a team that figures to do just that.
Last week: No. 3
Next game: vs. Florida Atlantic

5. Iowa (1-0) – With Marcus Coker's unexpected case of fumble-itis, Mika'il McCall's season-ending injury and the horrible weather conditions, including a lightning delay, you have to say it was an eventful opening game. Through it all, James Vandenberg and Marvin McNutt sure looked good.
Last week: No. 4
Next game: at Iowa State

6. Illinois (1-0) – The college football world hasn't given Nathan Scheelhaase enough credit since his coming out party midway through last season. Few quarterbacks have played as well as the Illini sophomore since that time, and he now has two highly underrated receivers, A.J. Jenkins and Darius Millines, at his disposal.
Last week: No. 6
Next game: vs. South Dakota State

7. Michigan (1-0) – Western Michigan is no offensive powerhouse, to be sure, but there's no doubt we saw a different Michigan defense Saturday than the one we've watched the past three seasons. I hear the arguments: It's one game. They didn't even play the fourth quarter. Let's wait and see what they do against Notre Dame. All are valid comments — still, it looks like Greg Mattison has the D headed in the right direction.
Last week: No. 9
Next game: vs. Notre Dame

T-8. Northwestern (1-0) – The Wildcats carded the Big Ten's most impressive victory, opponent-wise, beating Boston College in Chestnut Hill. As strong as Kain Colter was in relief of Dan Persa, though, Northwestern needs its star quarterback healthy to be the team many expect.
Last week: No. 8
Next game: Eastern Illinois

T-8. Penn State (1-0) – The Nittany Lions had their Week 1 game in the bag before they ran a single play, thanks to Chaz Powell taking the opening kickoff 95 yards to the house. Penn State went on to record an easy 41-7 victory over Indiana State, but the offensive line's pass blocking is a big concern, as is the field-goal kicking.
Last week: No. 7
Next game: vs. Alabama

10. Purdue (1-0) – The Boilermakers held off Middle Tennessee State, 27-24, in a game that was much closer than it should have been. More troubling than the final score, however, was the fact Purdue surrendered 329 passing yards. Pass defense was supposed to be a strength of this unit, considering it returns Ricardo Allen and Josh Johnson.
Last week: No. 10
Next game: at Rice

11. Minnesota (0-1) – Many experts spent the offseason praising the Jerry Kill hire, and we immediately saw the kind of impact he can have. The Gophers were a few completions away from possibly attempting a potential game-winning field goal at Southern Cal, of all places. The comeback bid fell short, 19-17, but the Gophers weren't helped any by QB MarQueis Gray getting hurt and spending most of the second half on the bench.
Last week: No. 11
Next game: vs. New Mexico State

12. Indiana (0-1) -The offense was better than expected, particularly starting QB Edward Wright-Baker, but the defense looked a lot like the product Indiana has trotted out there in recent years. The Hoosiers didn't force a turnover and allowed 378 total yards and 27 points, the most of any Big Ten opponent in Week 1, en route to their second straight loss to Ball State.
Last week: No. 12
Next game: vs. Virginia