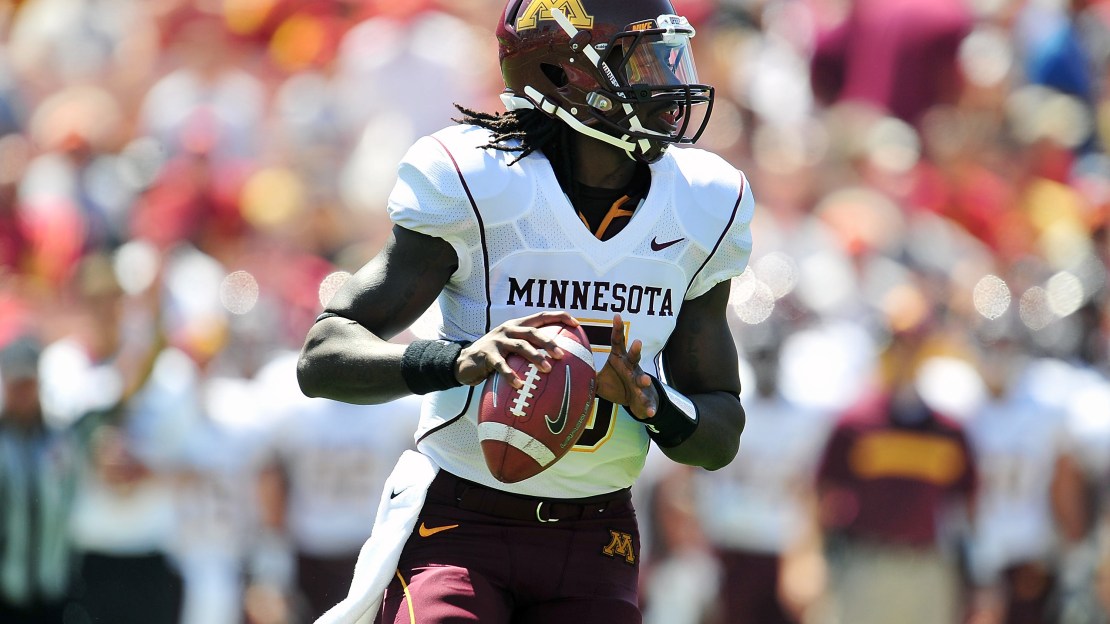 (AP) Robert Woods caught a school-record 17 passes for 177 yards and three touchdowns, and No. 25 Southern California hung on to spoil Jerry Kill's coaching debut for Minnesota in a 19-17 victory Saturday. Matt Barkley completed a school-record 34 passes for 304 yards for the Trojans, who still couldn't score in the second half of their 14th consecutive season-opening victory. Freshman quarterback Max Shortell came off the Gophers' bench in the fourth quarter and threw a 12-yard TD pass to Brandon Green with 8:03 to play, but Torin Harris intercepted his pass near midfield with 53 seconds to play. Read the full AP recap, check out the box score and see our Big Ten scoreboard.

FINAL: Robert Woods caught 18 passes for 174 yards and three touchdowns, helping USC to a 19-17 victory over Minnesota on Saturday at Los Angeles Memorial Coliseum. The Trojans' passing game looked flawless, despite the efforts of the Golden Gophers' secondary. USC's air attack couldn't be contained, as it torched Minnesota for 299 yards and three touchdowns. Matt Barkley completed 35 of 46 passes for the Trojans. He threw three touchdowns. Despite facing a 16-point deficit, the Golden Gophers closed to within striking distance of USC late, but the Trojans survived the comeback attempt and secured the win. USC racked up 399 total yards. The Trojans complemented Barkley's passing with 100 yards rushing on 26 attempts. Minnesota's Max Shortell went seven of 13 through the air for a total of 99 yards. Shortell finished the game with one touchdown and one interception. The Golden Gophers' offense finished the game having gained 303 yards, including 194 passing yards on 14 completions. Minnesota's rushing attack also contributed 109 yards to the total, with the tally coming on 34 carries.

FOURTH QUARTER: Minnesota continued to hang around , but lost to USC 19-17. The Golden Gophers went on a 13-point run to close the game. Minnesota closed the gap to 19-17 when Max Shortell hit Brandon Green in the endzone from 12 yards out to cap a 83-yard drive. The Golden Gophers only looked to the running game for one carry.

THIRD QUARTER: USC's Robert Woods led the offense in the third quarter. He caught four passes for 52 yards and the Trojans are now up just 19-10. Minnesota made the score 19-10 after Duane Bennett pounded in a nine-yard touchdown run to finish off a a 30-yard drive. A fumble recovery put the Golden Gophers at USC's 30-yard line to open the drive. The Trojans' Matt Barkley went over 200 yards passing for the game in the quarter, he now has 255 yards passing in the game. Minnesota will start the fourth quarter with the ball on its 21-yard line.

SECOND QUARTER: USC has raced out to an early lead and are on top 19-3 at the end of the second. The Trojans threw for 98 yards during the quarter. USC made its lead 12-0 when Matt Barkley hit Robert Woods in the endzone from 43 yards out on the last play of a five-play, 54-yard drive. Minnesota capped off a 65-yard drive when Chris Hawthorne made a 20-yard field goal to make the score 12-3. The Trojans opened up a 19-3 lead after Barkley threw a two-yard touchdown pass to Woods to end a 12-play, 65-yard drive. USC's rushing attack finished with just two carries. The Trojans' Woods went over 100 yards receiving for the game in the quarter, he now has 114 yards receiving in the game. USC will have possession to start the second half.

FIRST QUARTER: The expected blowout hasn't materialized yet and Minnesota is hanging tough with USC down 6-0 at the end of the first quarter. The Trojans struck first, marching down the field with a 15-play, 66-yard drive that resulted in a 6-0 lead after Matt Barkley tossed a seven-yard touchdown to Robert Woods. The Golden Gophers have possession on their nine-yard line to start the second quarter.