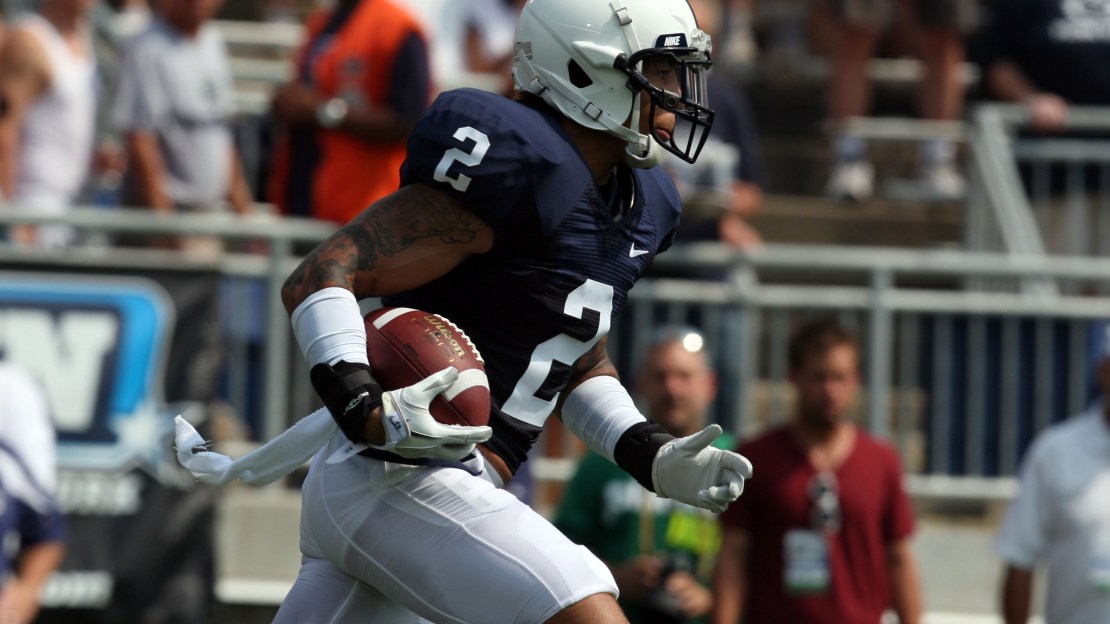 (AP) Chaz Powell set the tone by returning the game's opening kickoff 95 yards for a score and Silas Redd led an overwhelming Penn State ground game with two rushing touchdowns in a 41-7 win Saturday over Indiana State. Joe Paterno coached from the press box more than three weeks after suffering shoulder and pelvis injuries from a collision in practice, though the Nittany Lions didn't miss a beat against the Sycamores – an FCS team. Redd ran for 94 of his 104 yards by the second quarter. Rob Bolden started at quarterback, splitting time with Matt McGloin. Read the entire AP story, see the box score and view our Big Ten scoreboard.

FINAL: A great ground attack lifted Penn State to a 41-7 victory over Indiana State on Saturday at Beaver Stadium. Silas Redd carried the offensive load for the Nittany Lions, piling up 103 rushing yards and two touchdowns on 12 attempts. Penn State's defense stymied the Sycamores' rushing attack. The Nittany Lions held Indiana State to a mere 64 yards on the ground. The Sycamores found yardage hard to come by as Penn State's defense clamped down throughout the contest. The Nittany Lions' defense allowed just 169 total yards as it frustrated Indiana State's offense. Penn State's Rob Bolden was good for 38 yards during the game, completing six of 13 passes. He also threw no interceptions. The Nittany Lions racked up 362 total yards, including 115 yards passing while completing 12 of 21 attempts. Penn State's running game proved effective, netting 247 yards on 46 rushes. The Sycamores' Ronnie Fouch went 11 of 23 through the air for a total of 105 yards. Fouch tossed one touchdown and two interceptions. Justin Hilton was a key target for Fouch. He caught five passes for 45 yards and one touchdown.

FOURTH QUARTER: Penn State finished off its blowout of Indiana State with a strong fourth quarter and won 41-7. The Nittany Lions added to their advantage when Shane McGregor ran three yards to paydirt capping off a six-play, 64-yard drive to give Penn State a 41-0 lead.

SECOND QUARTER: Penn State's offense scored 14 points thanks to two long plays and the Nittany Lions now lead 28-0. Penn State executed a balanced offensive attack in the second quarter, finishing with 69 yards passing and 77 yards rushing. The Nittany Lions made their lead 21-0 when Michael Zordich turned a handoff into a one-yard touchdown on the last play of a 13-play, 75-yard drive. Penn State kept the ball on the ground during the drive, throwing only three passes. The Nittany Lions expanded their lead to 28-0 thanks to eight-play 77-yard drive that ended when Silas Redd ran four yards to paydirt. Indiana State is set to receive to start the second half.