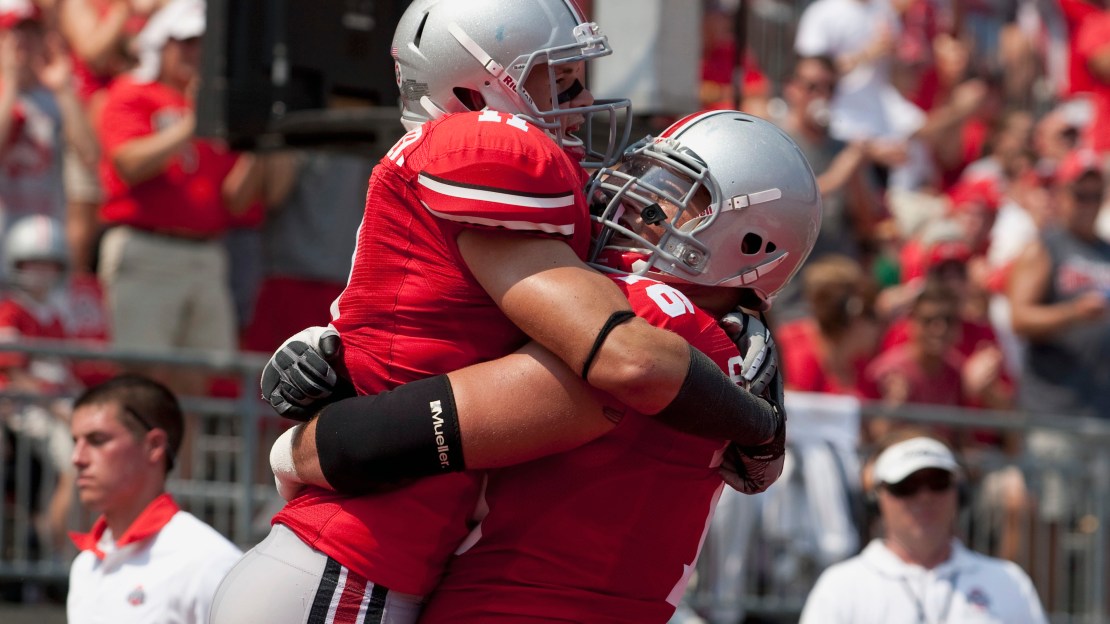 (AP) Starting his first game for Ohio State, quarterback Joe Bauserman ran for a touchdown and threw for three to tight end Jake Stoneburner to lead the No. 18 Buckeyes to a 42-0 win over Akron on Saturday. Luke Fickell made his debut for the Buckeyes, elevated from defensive assistant to take the place of Jim Tressel. Stoneburner became the first Ohio State tight end to catch three TD passes in a game. Bauserman, starting for the first time since he was in high school, eight years ago, ran for a 15-yard score and threw TD passes of 28, 11 and 2 yards. Read the full AP recap, see the box score and check out the Big Ten scoreboard.

FINAL: Joe Bauserman threw for 163 yards and three touchdowns, leading Ohio State to a 42-0 victory over Akron on Saturday at Ohio Stadium. The Buckeyes' passing game looked unstoppable at times against the Zips' defense. Ohio State's air attack couldn't be contained, as it torched Akron for 293 yards and four touchdowns. The Buckeyes' explosive offense used big plays to take down the Zips. Ohio State had six plays of 20 yards or more on its way to victory. With 7:26 to go in the fourth quarter, Braxton Miller found Evan Spencer open for a 33-yard pass, the Buckeyes' biggest gain of the game. The big play set up a seven-play drive that gave Ohio State a 41-0 lead after Rod Smith ran two yards to paydirt. Akron's Clayton Moore passed for 54 yards, completing six of 16 throws. He threw one interception. Moore was also a threat on the ground, as he rushed for 32 yards on eight attempts. The Zips' offense finished the game having gained 90 yards, including 55 passing yards on seven completions. Akron rushed 27 times for just 35 yards.

FOURTH QUARTER: Two long plays helped spur Ohio State's offense to 14 points and the Buckeyes kept the game out of reach for a 42-0 victory over Akron. Ohio State held the Zips to -22 total yards in the quarter. The Buckeyes expanded their lead to 35-0 thanks to eight-play 59-yard drive that ended when Braxton Miller tossed a 14-yard touchdown to Devin Smith. Ohio State made its lead 42-0 when Rod Smith pounded in a two-yard touchdown run on the last play of a seven-play, 38-yard drive. The Buckeyes started in good field

THIRD QUARTER: Two big plays sparked Ohio State's offense to seven points and the Buckeyes now lead 28-0. Ohio State's defense held tough in the quarter, holding Akron to 12 total yards of offense. The Buckeyes made their lead 28-0 when Joe Bauserman hit Jake Stoneburner in the endzone from two yards out on the last play of a 8-play, 51-yard drive. The Buckeyes kept the ball on the ground during the drive, throwing only two passes. Ohio State will start the fourth quarter with possession on the Zips' 21-yard line.

FIRST QUARTER: Akron continues to hang around, but still trails Ohio State 7-0 at the end of the first quarter. The Buckeyes got on the scoreboard first, rattling off a 10-play, 75-yard drive that ended in a score when Joe Bauserman ran 15 yards to paydirt, putting Ohio State on top, 7-0. The Buckeyes went to the air just two times. The Zips have the ball on their 11-yard line to begin the second quarter.