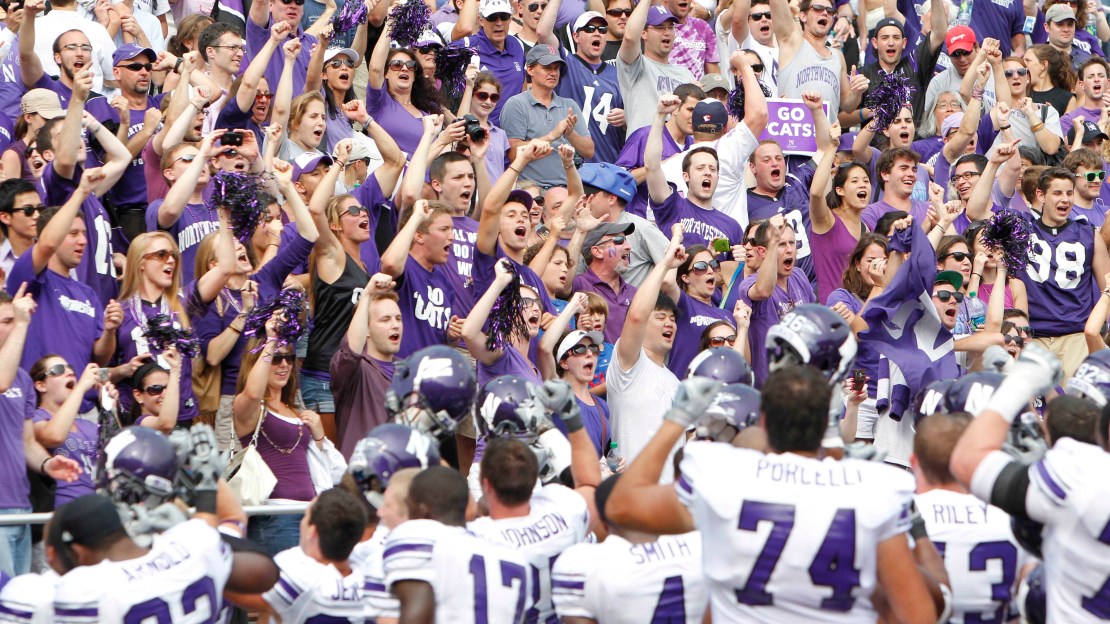 (AP) Backup Kain Colter threw for 199 yards and ran for 71 more with a touchdown on Saturday to lead Northwestern to a 24-17 victory over Boston College in the season opener. Colter completed 18 of 25 passes and Northwestern won for the first time since Dan Persa ruptured his Achilles tendon last Nov. 13. Persa, who had been touted as a Heisman Trophy contender by the school, was a late scratch. BC brought the ball deep into Northwestern territory in the final seconds, but Vince Browne got a sack on the final play. Read the full AP recap, check out the box score and see the Big Ten scoreboard.

FINAL: A one-two punch in the backfield from Mike Trumpy and Kain Colter helped Northwestern to a 24-17 victory over Boston College on Saturday at Alumni Stadium. Trumpy ran for 84 yards and one touchdown and Colter added 71 yards and one touchdown to pace the Wildcats. The Eagles nearly made a 14-point deficit evaporate, but Northwestern's defense held strong against a late Boston College comeback to clinch the victory. Home run plays keyed the Wildcats' scoring attack. The Eagles' defense gave up four plays of at least 20 yards. Northwestern added to the highlight reel when Trumpy ran 34 yards with 13:24 left in the third quarter. The big gainer was part of a 12-play drive capped off when Trumpy turned a handoff into a five-yard touchdown. That gave the Wildcats a 16-10 lead. Northwestern was able to secure the win thanks to a well-rounded offense that was firing on all cylinders. The offense for the Wildcats hummed along to the tune of 196 passing yards and 224 rushing yards. Chase Rettig threw for 350 yards while completing 24 of 44 passes for Boston College. He also threw one interception. Rettig's favorite target on the day was Ifeanyi Momah. He hauled in eight catches for 171 yards. The Eagles racked up 454 total yards, including 350 yards passing while completing 24 of 45 attempts. Boston College's ground game balanced its offense, bringing 104 yards on 30 attempts. Northwestern's Colter went 18 of 25 through the air for a total of 196 yards. He also threw one interception.

FOURTH QUARTER: Two long plays helped spur Northwestern's offense to seven points and the Wildcats kept Boston College at bay for a 24-17 victory. Northwestern opened up a 24-10 lead after Adonis Smith ran one yard to paydirt to end a 14-play, 77-yard drive. Pass plays were an afterthought for the Wildcats, as Northwestern threw just three passes. The Eagles closed the gap to 24-17 when Andre Williams turned a handoff into a one-yard touchdown to cap a 80-yard drive. Boston College ran just two times. The Eagles' Chase Rettig went over 300 yards passing for the game in the quarter, he finished the game 350 yards passing.

The Eagles have the ball on Northwestern's 28-yard line to begin the fourth quarter.

SECOND QUARTER: Boston College's Andre Williams ran for 22 yards and one touchdown and caught one pass for seven yards in the quarter, but the two teams are tied 10-10 at the end of the second. The Eagles broke the tie when Williams pounded in a six-yard touchdown run to cap off a six-play 79-yard drive, which gave Boston College a 10-3 lead. Northwestern tied things up at 10 when a 15-play, 80-yard drive ended after Kain Colter ran four yards to paydirt. Boston College's Williams went over 100 yards rushing for the game in the quarter, he now has 103 yards rushing in the game. The Wildcats will get the ball to start the second half.

FIRST QUARTER: Boston College's Andre Williams ran for 81 yards in the quarter, but the two teams are tied 3-3 at the end of the first. Northwestern tied the game at three after Jeff Budzien made a 43-yard field goal to end a 10-play 50-yard drive. The Wildcats will start the second quarter with possession on the Eagles' 11-yard line.