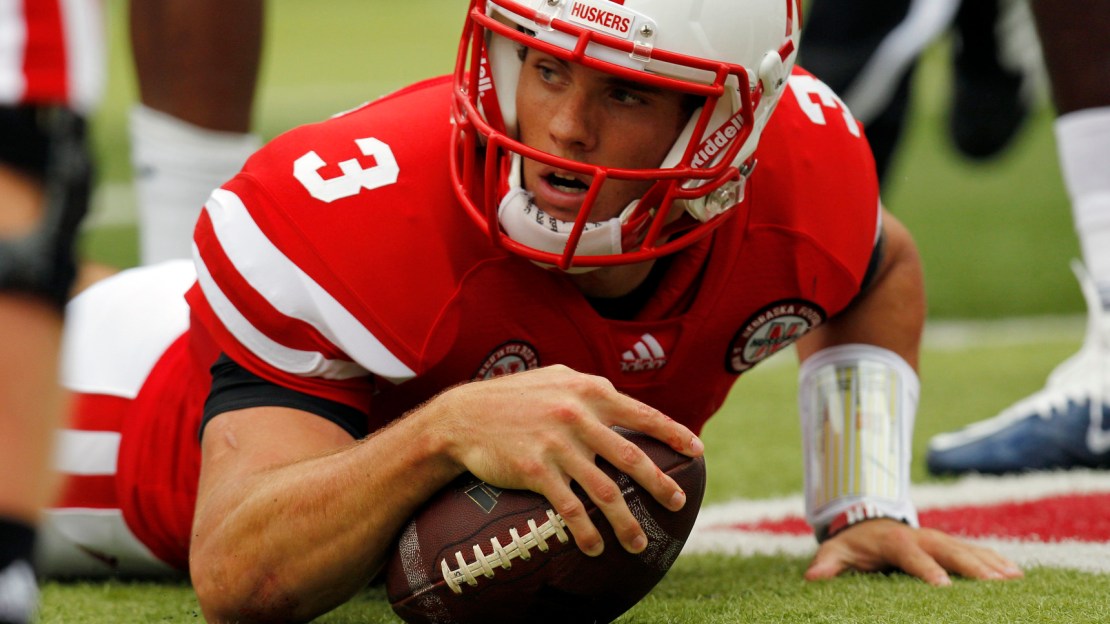 (AP) Taylor Martinez ran for 135 yards and three touchdowns out of Nebraska's new no-huddle offense and the No. 10 Cornhuskers beat Chattanooga 40-7 Saturday in their first game as Big Ten members. Rex Burkhead added 75 yards and a touchdown as the Cornhuskers won their 26th consecutive opener, the longest streak in the nation. Martinez scored on runs of 7, 43 and 47 yards and completed 11 of 22 passes for 116 yards. The Mocs of the FCS scored their only points when Marlon Anthony caught a 13-yard pass from B.J. Coleman after cornerback Andrew Green fell. Read the full AP recap, see the box score and check out our Big Ten scoreboard.

FINAL: Taylor Martinez broke out against Chattanooga, piling up 134 rushing yards and scoring three touchdowns to lead Nebraska to a 40-7 victory on Saturday at Memorial Stadium. The Cornhuskers' explosive offense used big plays to take down the Mocs. Chattanooga's defense gave up five plays of at least 20 yards. With 11:01 to go in the first quarter, Rex Burkhead ran 53 yards, Nebraska's biggest gain of the game. The big play set up a six-play drive that gave the Cornhuskers a 6-0 lead after Martinez turned a handoff into a seven-yard touchdown. Nebraska racked up 368 total yards, including 135 yards passing while completing 12 of 24 attempts. The Cornhuskers' running game proved effective, netting 233 yards on 43 rushes. Nebraska's Martinez was good for 116 yards during the game, completing 11 of 22 passes. He also threw no interceptions. B.J. Coleman threw for 240 yards while completing 20 of 33 passes for the Mocs. Coleman finished the game with one touchdown and one interception. Chattanooga's offense finished the game having gained 293 yards, including 236 passing yards on 23 completions. The Mocs struggled to move the ball on the ground, earning 57 yards on 29 attempts.

FOURTH QUARTER: The teams combined for no points and one turnovers in an ugly fourth quarter, and Nebraska finished off Chattanooga 40-7.

THIRD QUARTER: Nebraska racked up 65 rushing yards in the third quarter and the Cornhuskers now lead 40-7. Nebraska is currently on a 16-point run. A 72-yard drive that ended when B.J. Coleman hit Marlon Anthony with an 13-yard touchdown pass led Chattanooga to close the deficit to 23-7. The Mocs' rushing attack finished with just one carry. The Cornhuskers expanded their lead to 26-7 thanks to 10-play 37-yard drive that ended when Brett Maher drilled a 21-yard field goal. Nebraska had to settle for a field goal after failing to reach the endzone from Chattanooga's two-yard line. The Cornhuskers' drive began with good field position at the Chattanooga 41-yard line when they recovered an on-side kick by Chattanooga. Nebraska didn't throw a single time. The Cornhuskers made their lead 33-7 when Rex Burkhead ran three yards to paydirt on the last play of a four-play, 95-yard drive. The Cornhuskers opened up a 40-7 lead after Taylor Martinez pounded in a 47-yard touchdown run to end a three-play, 47-yard drive. A punt return set Nebraska up at the Mocs' 47-yard line to start. The Cornhuskers' Martinez went over 100 yards rushing for the game in the quarter, he now has 134 yards rushing in the game. The Mocs have possession on Nebraska's 19-yard line to start the fourth quarter.

FIRST QUARTER: Nebraska's two big plays led to 10 points and the Cornhuskers lead 10-0 at the end of the first quarter. Nebraska got on the scoreboard first, rattling off a six-play, 64-yard drive that ended in a score when Taylor Martinez pounded in a seven-yard touchdown run, putting the Cornhuskers on top, 7-0. Nebraska opened up a 10-0 lead after Brett Maher drilled a 47-yard field goal to end a eight-play, 29-yard drive. The Cornhuskers went to the air just one time. Chattanooga has the ball on Nebraska's 49-yard line to begin the second quarter.