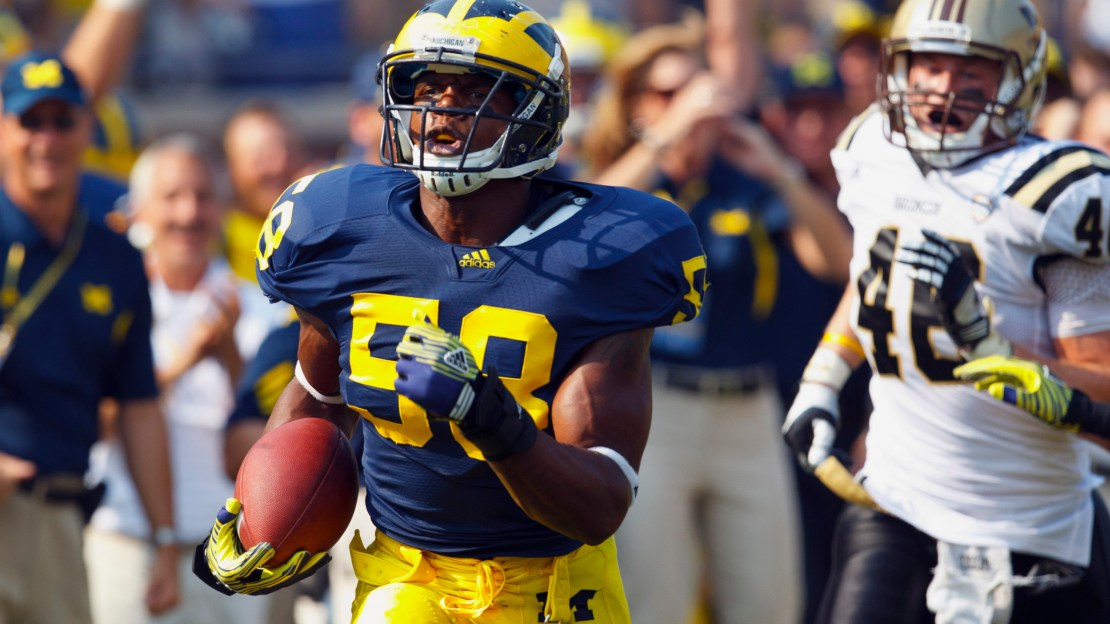 (AP) Michigan has beaten Western Michigan 34-10 in a game stopped late in the third quarter because of lightning. Both schools agreed to cancel the game with 1:27 left in the third during a second weather delay. The Wolverines won Brady Hoke's debut with linebacker Brandon Herron returning an interception 94 yards for a touchdown and scoring again on a fumble return. Fitzgerald Toussaint had 11 carries for 80 yards and ran for two TDs. Denard Robinson was 9 of 13 for 98 yards and ran eight times for 46 yards, making him the team's third-leading rusher in the game. Read the full AP recap, see the box score and check out our Big Ten scoreboard.

FINAL: Michigan notched a blowout win over Western Michigan, 34-10 on Saturday at Michigan Stadium, in a game that was called due to weather late in the third quarter. Fitzgerald Toussaint carried the offensive load for the Wolverines, piling up 80 rushing yards and two touchdowns on 11 attempts. Denard Robinson threw for 98 yards while going 9-13 for Michigan. He threw no interceptions. Robinson also ran for 46 yards on eight attempts. The Wolverines' offense finished the game having gained 287 yards. Along with Robinson's stats in the passing game, Michigan also added 189 yards rushing on 26 attempts. Alex Carder threw for 183 yards while completing 22 of 31 passes for the Broncos. He also threw one interception. Carder's favorite target on the day was Jordan White. He hauled in 13 catches for 127 yards. Western Michigan racked up 282 total yards. The Broncos' rushing attack  only managed to contribute 99 yards on 24 carries in addition to Carder's passing effort.

THIRD QUARTER: Michigan's offense scored 14 points thanks to three long plays and the Wolverines now lead 34-10. Western Michigan has given up 11 straight points. Michigan made the score 27-10 when the Wolverines recovered a fumble in the endzone. Michigan added to its advantage when Michael Shaw turned a handoff into a 44-yard touchdown capping off a five-play, 87-yard drive to give the Wolverines a 34-10 lead. The game was called due to weather late in the third quarter.

SECOND QUARTER: Michigan's Fitzgerald Toussaint starred in the second quarter. He ran for 14 yards and two touchdowns and the Wolverines have taken the lead 20-10. Michigan got even after Toussaint pounded in a one-yard touchdown run to end a 18-play, 76-yard drive that tied the score at seven. The Wolverines made the score 14-7 when Brandon Herron intercepted Alex Carder's pass and returned it for a touchdown.

Michigan expanded its lead to 20-7 thanks to 12-play 74-yard drive that ended when Toussaint ran two yards to paydirt. The Wolverines threw just two times. A 43-yard drive that ended when John Potter kicked a 36-yard field goal helped Western Michigan narrow the deficit to 20-10. The Broncos didn't run a single time. Western Michigan's Jordan White went over 100 yards receiving for the game in the quarter, he now has 104 yards receiving in the game. Michigan will have possession to start the second half.

FIRST QUARTER: Antoin Scriven had a productive quarter for Western Michigan. He ran for four yards and one touchdown and the Broncos lead 7-0 at the end of the first quarter. Western Michigan scored when Scriven ran for one yard to cap off a 15-play, 74-yard drive. Michigan has possession on Western Michigan's two-yard line to start the second quarter.